Sometimes you walk in and you can feel the ghosts. Energy lingers, memories or emotions, however you want to define it. It can be magnified by four walls, but really, a haunt has no physical limitations. A single room, an entire house, a field, a forest...or a town...can be the bell jar trapping a restless spirit. Me, I’ve never seen a ghost, though I have watched as a door I know was latched swung slowly open. Now, hark. The horizon is closer. The wind’s changing. Something is peering through the veil.

When it will come, what form it will take, whether it’ll rise to the level of Silent Hill 2 or be a crashing letdown...we don’t know yet. All we have is a teaser. But that teaser has become ridiculously famous in a very short time. Seriously, guys, this thing won awards last year, as if it were a real game. And it almost is. Playable Teaser, despite its generic name, serves as a self-contained experience of terror, and the last-minute reveal that it’s for a new Silent Hill entry...well, that’s the juicy cherry on top. I don’t have a PS4 yet, so I am unable to play P.T. myself, but since there’s not much to the actual gameplay, I can get a reasonable facsimile by watching others play it. (Again, it was mostly Markiplier; that guy is becoming my go-to guru for horror gaming, even if he has yet to play a real Silent Hill game. Someone start a petition?) P.T. has made the rounds, with people proclaiming, “SCARIEST THING EVAR,” and yes, it knows how to scare. Is it scary in the distinctive way one expects from Silent Hill? Hmmmmmmm. 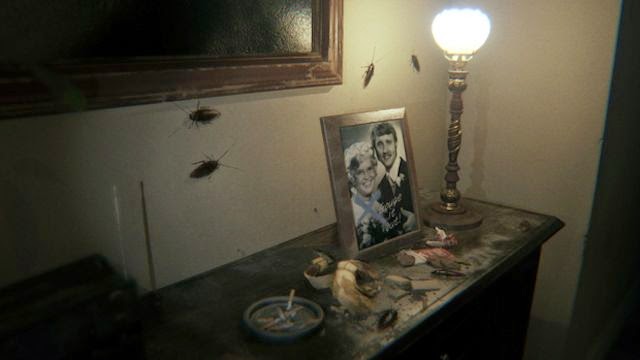 In The Room, the hero would return to his comfortable apartment over and over. A haven. But during the second half of the game, the apartment began to change, first subtly, then in dramatic and horrifying ways, as ghosts took hold of the walls and furniture like a spreading disease. P.T. adopts a similar style. The hall darkens. A baby cries. Blood drips. The voices on the radio sound...wrong. There’s something ghastly in the bathroom sink. There’s a wraithlike female figure, sometimes glimpsed, other times savagely attacking you. A story comes into focus: a man murdered his wife and child. Is the ghost the wife? Are you the murderous husband? Trapped at the scene of the crime, reality corkscrewing to torment you with the images of your own dark deeds? Because that’s how the town of Silent Hill operates: it digs into your mind, extracts the worst in you, turns it into a flesh-and-blood masquerade where you are the star, the audience, and the victim. This innocuous hallway with its off-white paint job and classy light fixtures begins to seem like a little sliver of hell. In that respect, P.T. taps into what makes Silent Hill games scary, the sense that even normality is all wrong. All rotten. 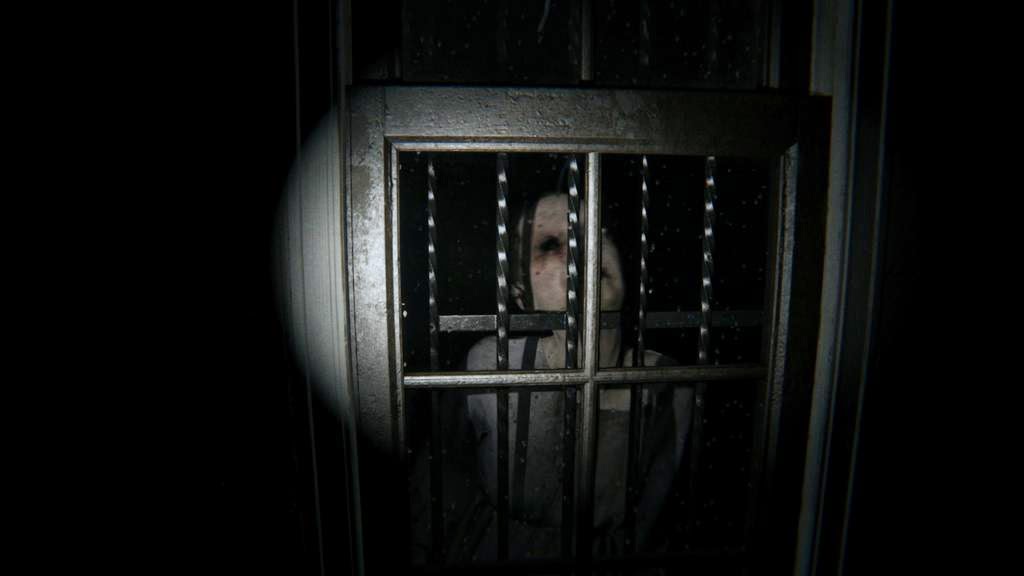 It’s a very well-made little experience. I think it would have been even better if it had limited itself to a scary walking tour. However, P.T. also wants you to actually do stuff, and as a result, its impact is diminished. You must, for example, find the scattered pieces of a photo. Bring a magnifying glass. The teaser pulls some Eternal Darkness-style pranks by making you think it has crashed and hiding a secret in the settings menu. Toward the end, things get super-confusing, as the “rules” for avoiding and/or manipulating the ghost lady and the baby-voiced thing in the bathroom are a bit murky. After building its scares at a good pace, making itself more freaky and intense with each trip down the hall, the teaser’s momentum screeches to a halt while you try and figure out its puzzle logic. And unless you’re unusually intuitive, or you’re a cheating cheater who cheats, you’ll be trudging back and forth, up and down, combing the hallway for answers. And that’s the bad kind of repetition. Delicious dread (“What’s coming next?”) turns to doldrums (“What the fuck do I do next?”).

You bet your ass I’m cautiously enthusiastic for Silent Hills. My enthusiasm needs no explanation, but my caution arises from Playable Teaser’s muddled final act, and the fear that it represents the final product. What if it looks amazing, only to descend into an unfocused pea soup of ideas? Or, worse, gimmicks? According to some people, one must yell into the PlayStation mic to beat the game. That may or may not be true, but I sure hope it’s not foreshadowing. I don’t need to be reveling in a Silent Hill game and then have a cheerful prompt tell me to yell into the mic, or swipe the touchpad, or take all my clothes off and dance on my couch with the controller balanced on my erection. Resident Evil has tried such bullshit on the DS, and nobody liked it then, either. Probably I’m paranoid. I just don’t want Silent Hills to be “experimental,” unless it’s the type of story-focused experiment we got in Shattered Memories. My other big fear is that P.T. doesn’t really look or feel like a Silent Hill game. Yeah, there’s the radio, and the cockroaches, and the sense that the environment itself is punishing you. But the lady ghost would be more at home in the Fatal Frame franchise, and the imagery is cherry-picked from the horror genre in general, not Silent Hill in particular. If it’s still a good, scary game, I’ll probably be satisfied. But I want the fog and the dead streets. I want the old aesthetic, and not just as fan service. I want SILENT HILL. 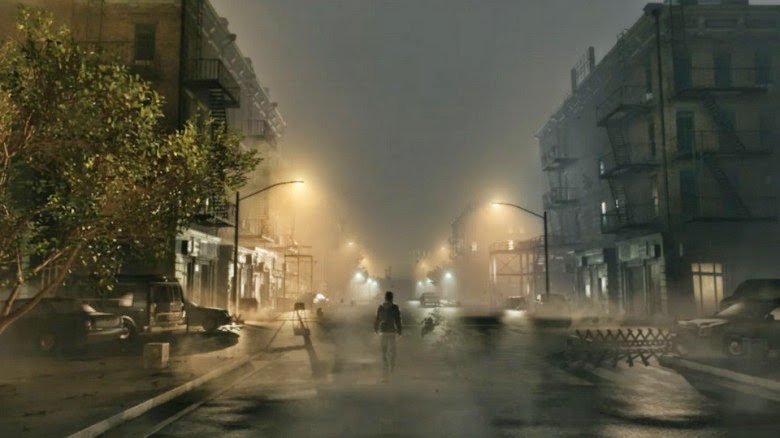 Once you reach the end of P.T., you are rewarded with a man, flashlight in hand, walking down a dark, abandoned street. Three names fade into view. Hideo Kojima. Guillermo del Toro. Norman Reedus. And then the title, Silent Hills, and a squee-inducing strain of Akira Yamaoka’s original, jangly musical score. If you lack sufficient nerdiness to recognize the above names, they are, respectively, the venerable creator of the Metal Gear series; the geek-god director of such films as Pan’s Labyrinth, Hellboy, and Pacific Rim; and the actor best known for potraying Daryl Motherfucking Dixon on The Walking Dead. (I’m pretty sure his name is literally Daryl Motherfucking Dixon. Like, it’s on his driver’s license.) In other words, Silent Hills has hired some serious pedigree and is making certain sure we know it. I have no sense of Kojima or his work, but...well, I would have said anything with del Toro’s name has gotta be good, but then I remembered The Strain, an unoriginal and badly-written series of vampire novels that del Toro didn’t actually write, even if he’s billed on the cover. So there’s another worry: that they paid del Toro a heap of money, but he contributed little beyond the idea stage. As for Reedus, he’s apparently playing the protagonist through motion capture, and I know he’s a good actor, but...did they really have to go with yet another grim male antihero with a lousy haircut? And will it be distracting and/or unscary to play a Silent Hill game as Daryl Motherfucking Dixon, zombie slayer extraordinaire?

I don’t know, I don’t know, I don’t know. I should not make wild assumptions. We don’t even know if Playable Teaser has any bearing on the final game at all. It could be a mere appetizer that gets folks in the survival-horror mood. What matters is that’s it’s really scary -- scarier than some actual Silent Hill games -- and also offers exciting new marketing possibilities. We live in an age where game trailers can be more expensive than some indie films. At the same time, I’ve sensed a rising backlash against trailers that mislead, or make ridiculous promises, or show off a game’s visuals but not its gameplay. Everyone got so obnoxiously excited for Watch Dogs, lulled by the promise of freedom and fully open-ended gameplay. And then the actual game was just another “Go here and shoot these guys” yawnfest. But here’s a teaser that you can actually play. And it’s not on a huge screen at E3; it’s in your own living room. It plays your nerves like a mandolin, pulls you into that shivery, happy zone of horror gaming, and then says, “You like this? You had fun? You got scared? Oh, by the way, we’re making a new Silent Hill game. Now that your appetite has been whetted, perhaps you’ll take the journey with us.” I will. Oh, yes, I will. I want to walk those foggy streets again. And I’m okay with having three talented men as my tour guides. But they’d BETTER NOT FUCK THIS UP OR THE CURSES OF A THOUSAND BETRAYED HORROR FANS WILL BE UPON THEIR BEARDED HEADS.

Keep watching this blog. Silent Hills is coming. My flashlight is packed. I’m ready. Bring it on, town of my nightmares. 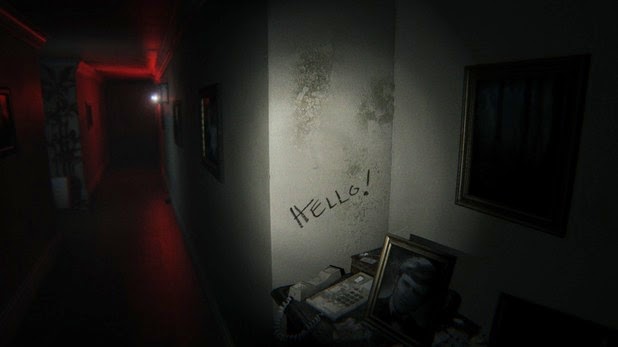