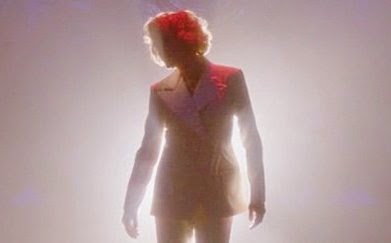 --I do believe American Horror Story just pranked me. I enjoy my analogy about how the curtain closes, the props get packed away, the actors go home. Done for another year, until this show comes round to entertain us again. But the finale of Freak Show made the argument that for some, the curtain never closes. The spotlight never dims. The show goes on.

--I feel like a paradigm shift has been signaled. Maybe it’s just hopeful optimism (despite its strengths, Freak Show’s path was a teensy bit too well-trodden for my liking), but I feel like the winds of change are blowing. TV itself is changing. Anthology shows, star-studded “event television,” quality emphasized over ratings, all are on the rise. American Horror Story needs to adapt. Maybe it will, maybe it won’t, but its place in the metamorphic realm of the small screen mirrors the themes of this finale.

--Generally, at the close of things, AHS likes to tidy up, sweep the floor with its various subplots, zoom in on the last characters standing. I knew what that implied, and prayed so hard that it wouldn’t come to be. My prayers were ignored. Dandy proved himself to be a godawful boss of the freak show, and it didn’t take long for the troupe to decide that unemployment was preferable to being the singing, kowtowing monkeys for a rich brat’s delusional Cole Porter covers. Abandoned by the freaks, Dandy got that look. Not the scrunchy-faced look of wrath. The resigned, melancholy look. Which is far scarier. His debut wasn’t going to be what he wanted, but it would showcase the one thing he’s really good at.

--Meanwhile, Elsa made it to Hollywood only to discover that Hollywood sneers at aging, dyed-blonde wannabes with German accents who think they’re too good for appointment books. Her slide into abject humiliation was halted by a chance encounter with a friendly young functionary, played by David Burtka, who is Neil Patrick Harris’s husband. Let’s ponder the weird metaphysics of that. Now that we have sufficiently stalled, let’s get into the cruelty that followed... 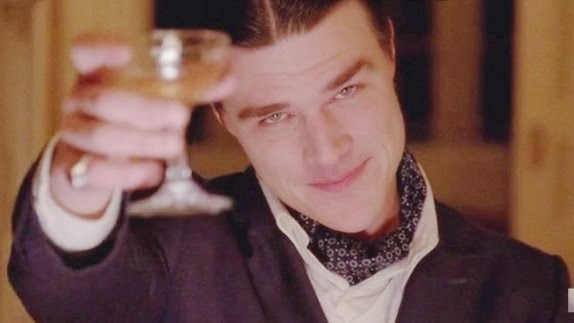 --Dandy’s murder spree. Unsurprising, unwanted, so much worse than I hoped. Dandy put on a dapper white tux and tasteful makeup, then strolled through the freak show with a golden pistol. He killed them all. All of them. I wanted a few to escape. No. He calmly, methodically gunned them down. Paul the Illustrated Seal. Penny the Lizard Girl. Legless Suzi. Toulouse. Barbara the Fat lady. Even those nameless roustabouts in the background. Amazon Eve at least put up a fight, and still died, as I screamed, “GODDAMMIT, EVE, YOU BEAT UP DELL THE STRONGMAN AND YOU CAN’T DEFEAT THIS PENCIL-DICKED, BABY-FACED DOUCHEBAG?” Apparently not. The inability of the freaks to escape their pitiful ends infuriated me; this is not what I expect from such a capable group. But the demands of the plot and all that. The scene was horrifiying in its silence; the only music was Dandy eerily humming The Nutcracker Suite, punctuated by gunshots (did his pistol not need reloading or what?). One small bright side: Eve’s sacrifice allowed Desiree to hop between hiding places and save herself. Dandy took Bette and Dot as his trophies, and Jimmy staggered in to find a tentful of dead friends. FUCCCCCKKKKK, I hated that sequence. Those people actually came to mean something as characters. Once again, this show does the “massacre as social metaphor” thing and leaves us in a fetal position.

--Dandy got his just desserts, of course. He married Bette, who seemed smitten with her murderous man, but it was, in fact, the acting performance she’d always dreamed of pulling off. In truth, the sisters were collaborating with Jimmy and Desiree to bring Dandy down. They drugged him, hauled him back to the freak show, and plopped him into a glass tank for some Houdini hijinks. Dandy got to perform onstage, but the performance was him slowly drowning while the four survivors watched with glee. Desiree sensually ate popcorn, because awesome Angela Bassett moments have become the show’s meat-n-potatoes. Thus ends the freaky rise and fall of Dandy Mott, and let that be a warning to us all, what happens when people are raised to believe they can have, and deserve, anything they want. Like I said before, Dandy is scary not because he’s some sort of inbred Rosemary’s baby, predestined to murder, but because creeps like him exist everywhere. Should we feel sorry for him? At all? Well, it was kinda weird how Freak Show focused so hard on “revenge porn,” relishing how the freaks enacted lethal vigilante justice, over and over and over. Hell, Esmerelda was the only one to suggest that they not just murder anybody who wronged them, and her reward was to die gruesomely and unmourned. Odd ethics, don’t you think? Regardless, Dandy of all people had it coming.

--Wonder what happened to Detective Turdlicker? Hopefully nothing good. Maybe his murder of Regina came out and he wound up sharing a prison cell with Chester, who snapped and removed Detective Turdlicker’s spinal cord and turned him into a brand-new ventriloquist act. 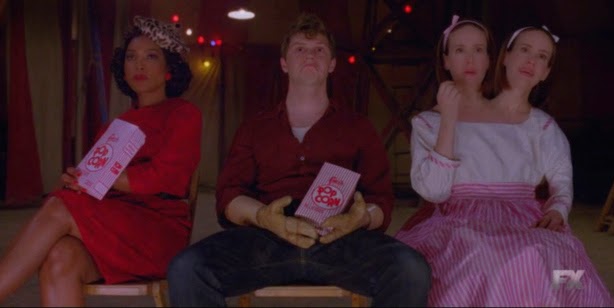 --With Dandy’s sordid story done, the spotlight shifted to Elsa Mars, TV star, musical star, Hollywood walk-of-fame star. She got everything she wanted! And she hated it! HAH HAH HAH! Yep, Elsa’s dreams turned out to kinda suck. She found herself with no friends, only hangers-on. By 1960, she and her manager/hubby/bedroom sex slave couldn’t stand each other, she was disgusted with her own image, and her one remaining spark of happiness, Massimo Dolcefino, was dying of cancer. (He also revealed he’d been out in Nevada, building fake towns for the atomic bomb tests, thus making it all but certain that Season Five will involve Operation Top Hat. I’m excited!) The final nail in the coffin came when Elsa’s unsavory, unmarketable past caught up with her. Oh, you starred in Nazi snuff porn and ran a freak show whose performers all ended up murdered? Buh-bye, ex-cash cow! Nothing left for Elsa. And so she committed suicide in a most show-bizzy way: she performed on Halloween. Onstage, she murmured her way through “Heroes,” and I’m glad, because now the “anachronistic musical number” thing seems like a recurring wraparound theme and not an awkward gimmick that the showrunners dumped when nobody liked it. As Elsa sang, we got flashes of Desiree, mother of two cute kids with Angus T. Jefferson; and Jimmy, Bette, and Dot, cozily hitched and expecting younguns of their own. So nice, that a few found happiness. It looked like happiness would forever elude Elsa Mars: Edward Mordrake slithered up, with Twisty the Clown guest-starring by his side, and ended Elsa’s life. BUT.

--There is a heaven for stars of the stage! And, unlike last season, Jessica Lange’s character had done enough good deeds to earn the right to bathe in the eternal spotlight. Newly deceased, Elsa found herself back in her Cabinet of Curiosities, warmly welcomed by Ma Petite, Ethel, and all her freaks. Even Meep was there! (No Pepper, though; she wasn’t dead yet, but I assume she also finds herself back in her true home, back in the arms of the first of her two Jessica Lange-faced mama-figures.) In this warm afterlife, the house is always packed, your voice sounds great, your legs aren’t made of wood, and you receive a standing-O as you make your stage debut. Final image of the season: Elsa Mars, dead and happy, inhaling as she prepared to sing her newly-deGrinchified heart out. Awwwwwwwww. 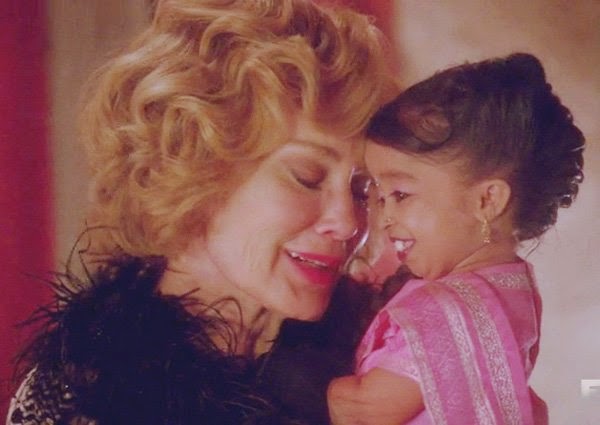 --If that ending seemed overly corny, keep in mind that it also served as the AHS swansong of Jessica Lange. Maybe. Her initial determination to make Season Four her last seems to have wavered. If they really do shake up the formula, she may be back in some capacity. And they should shake that formula hard, because American Horror Story needs a breath of fresh air. I really enjoyed Freak Show. I loved many of the individual performances. I like how it felt a bit more grounded than Coven, and how it made its cast of freaks into interesting people rather than talking props. I’m not disappointed. But I do feel as if this show’s in a creative rut. Throughout Freak Show, the interesting stuff kept getting interrupted by weird little subplots that no one cared about, and awkward creative choices. The “what-if” murders committed by Stanley? Those should never have happened. Ma Petite’s death lost a lot of its impact when we’d already seen her “die” one week ago. Such bullshit ruins the stakes. Also, Edward Mordrake didn’t belong. A single supernatural entity in a story that is otherwise 100% free of ghosts and ghoulies? Inappropriate. These touches smacked of the need to make AHS feel like the same old horror story. But that’s not what we want. We want to be surprised. Challenged. We want this show to expand its ideas instead of closing back in around them.

--That is what I hope we’ll get next year. With the departure(?) of Lange, with the newly established connections between storylines, AHS could reinvent itself. This sounds cruel, but I want to see other actors exit besides Lange, not because I don’t like them, but because too many cooks spoil the broth. Narrow down the main cast, seek out new talent instead of scrambling to find perfunctory roles for your Emma Robertses and your Grace Gummers and your Denis O’Hares because you don’t wanna hurt their widdle feelings. Yeah, I’m mean, but there’s a reason two of my favorite actors in Freak Show were first-timers Michael Chiklis and Finn Wittrock. Make it new. Make the web of story connections into something meaningful, or at least understated, instead of a tiresome game of “spot the reference.” Listen to the winds of change and make the apparently atomic bomb-themed Season Five a tour de force that wakes us all up! DO IT.

--Do it and I will love you. I will renew my vows. Willing freak that I am. 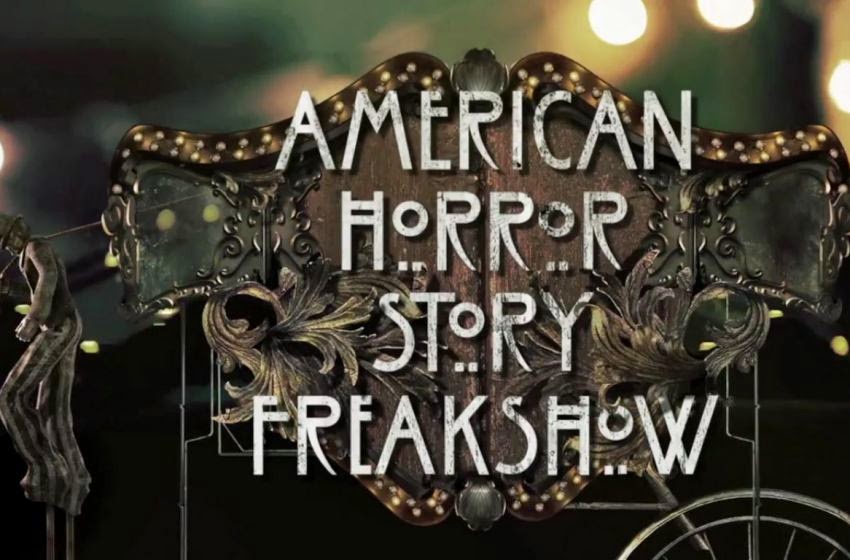