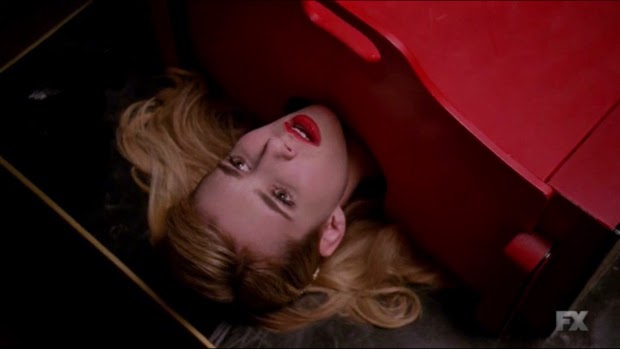 --Okay, okay. Like a gimp, I shall eat some crow. I really loved this week’s episode. It was touching, shocking, interesting, and unexpected. It wrapped up a bunch of stuff and still left us with an “OH SHIT” cliffhanger going into the season finale. It was one of those single episodes of TV that left me feeling like I’d eaten a good, solid, full-course meal. So while it’s still possible the finale may be a letdown, I’m infused with more optimism. I am sure if I browse the online recaps, I’ll find a million people whining about how terrible this episode was. So I won’t. La la la.

--Heh. Stanley. I had a pretty good notion of how he’d get his comeuppance, so while I was not surprised by what happened, I watched it with relish, over toast and tea. During a lovely little going-away party for Elsa, the freaks, all toothy grins and good cheer, gave Stanley a gift: the head of the curator of the Museum of Oddities, in a jar. Desiree aims to set some kind of righteous murder record! Appropriately, what followed paid homage to Tod Browning’s Freaks, possibly the most (in)famous film ever made about sideshow performers. Our beloved troupe of oddballs stalked Stanley with many sharp implements, and I was surprised they didn’t show the carnage, given this show’s love of excess. Turns out they were withholding a twist, as the ep’s wind-down showcased Stanley in a cage, mute, limbless, and presumably lacking his mighty thundercock. He’s the new Meep! I’d say that’s a fitting fate for him.

--What fate shall befall dear Jimmy? He has no hands, no parents, and is still wanted by the law. Esmerelda was eager to tend to her man, but Jimmy wanted nothing to do with her. “I’ll make it right!” she mewled, and given what happened to her later, such upbeat assurances drown in a sick swamp of irony. Elsa, meanwhile, summoned up her better instincts and called upon a ghost from her past: Massimo Dolcefino, the woodcrafter who made her false legs. My crush on Danny Huston burns bright as ever, and I also love the chemistry between him and Jessica Lange, now enjoying its second incarnation. Bonus backstory: so smitten with Elsa was Dolcefino that he went on a crusade of murder against the men who mutilated her. But he fell victim to their ringleader, an infamous Nazi doctor named Hans Gruper. That name should sound familiar. Oh, yes, it should. Dolcefino survived the war but his soul, and manhood, were no longer intact. He and Elsa were left with a lifetime of regret. And Hans Gruper? He fled to America, changed his name to Arthur Arden, and began conducting unusual experiments at a certain asylum. The hyperlinking of AHS continues!

--I’m kinda happy that this ep (seemingly) wrapped up Chester’s story. He was compelling enough, but too much of a newcomer to hog the finale. His love affair with Bette and Dot was his downfall. Marjorie the dummy got more and more fed up, and to make matters worse, Dandy dropped by, all slimy charm, to hand the Tattler twins a dossier on Chester’s bad deeds. It put them on edge enough to evade Chester’s magic act, and who should step up to take their place but poor Esmerelda, all “Now will you guys like me?” There was that delicious moment when I thought, No. They’re not gonna. Are they? They did. Chester sawed Esmerelda in half, sans magic, while she screamed and died and her intestines went everywhere. “She had it comin,” Desiree tartly proclaimed. The moral of this entire season: Karma will always kick you into the mincer, so don’t even try to reform, you scumbag shithead loser. Not sure I agree, but kudos to this show for proving it can still make my jaw drop. Now a thrice-times murderer, Chester fell upon his tormentor, Marjorie, “killed” her as well, then confessed his bloody deeds to some very confused cops. Bye, Chester! Hope Briarcliff treats you well!

--Would Elsa be the next victim of the freaks’ harsh justice? They were on a roll, and Stanley managed to accuse Elsa of Ethel’s murder before they Meepified him. Enough proof to convict? The troupe thought so. Bette and Dot, however, felt they owed Elsa enough to warn her. So Elsa got the fate she, too, deserved: not death, but having to flee ignominiously into the night, hated by the very freaks she’d saved and mothered. Don’t ask me to feel sorry for her; she still gets a happy Hollywood ending, maybe. Who gave Elsa the money to skedaddle? Dandy, who’s been on the backburner for awhile, but only because he was patiently planning his next act of awfulness. Yes, Dandy Mott, rich murdering psychopath extraordinaire, is now the owner of Elsa’s Cabinet of Curiosities. And he is a very, very happy boy. Well, FUCK. This should ensure a blood-soaked final episode, huh.

--And here’s why I really dug this week. Because, rather than ending on the ominous image of Dandy claiming the freak show, or the creepy/satisfying image of Stanley as a mutilated gimp in a cage, they chose a note of deep poignancy. Jimmy had been waging an internal struggle. He’s lost so much, but Massimo Dolcefino can make him almost normal. Almost. That’s what he’s always wanted, right? But was his mother, Ethel, wise to teach him how to embrace his differences? Was his father, Dell, wise to demonstrate how being “normal” is sometimes the worse thing? Jimmy has learned a lot. And so, at the end, he made his choice, and the final image was him donning his new prosthetics: a pair of wooden lobster hands. I almost teared up a little. It was a moment of beauty. I hope there’s still some beauty to be had, and next week’s climax doesn’t end on the note of tragedy and pessimism I fear it will.

--Also, I think Desiree should wind up as the freak show’s owner. She has great motherly instincts, she can be tender, but she’ll also kill to protect those close to her. Angus T. Jefferson can be the show’s emcee. Who’s with me? 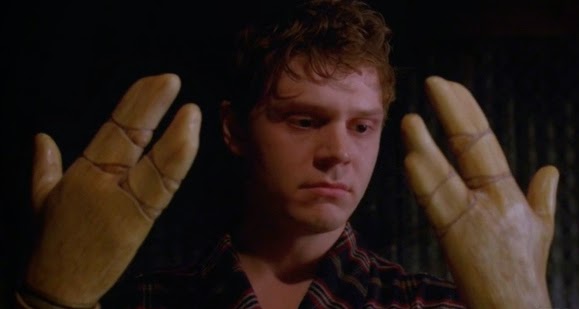