Man, Steam saved my ass this year. Up until, like, December, my running Games of the Year list felt rather anemic. Then my new laptop and upgraded OS conspired with the big Steam holiday sale to dump some winners in my lap. Phew! Shout-outs to Serena and Secrets of Rætikon, both of which were on this list right up until the aforementioned dump. The former was effectively eerie and story-driven but felt more like an idea than a game, and the latter had wonderful art design but was awfully rough around the edges. Still worth my time!

And now, the annual tradition... 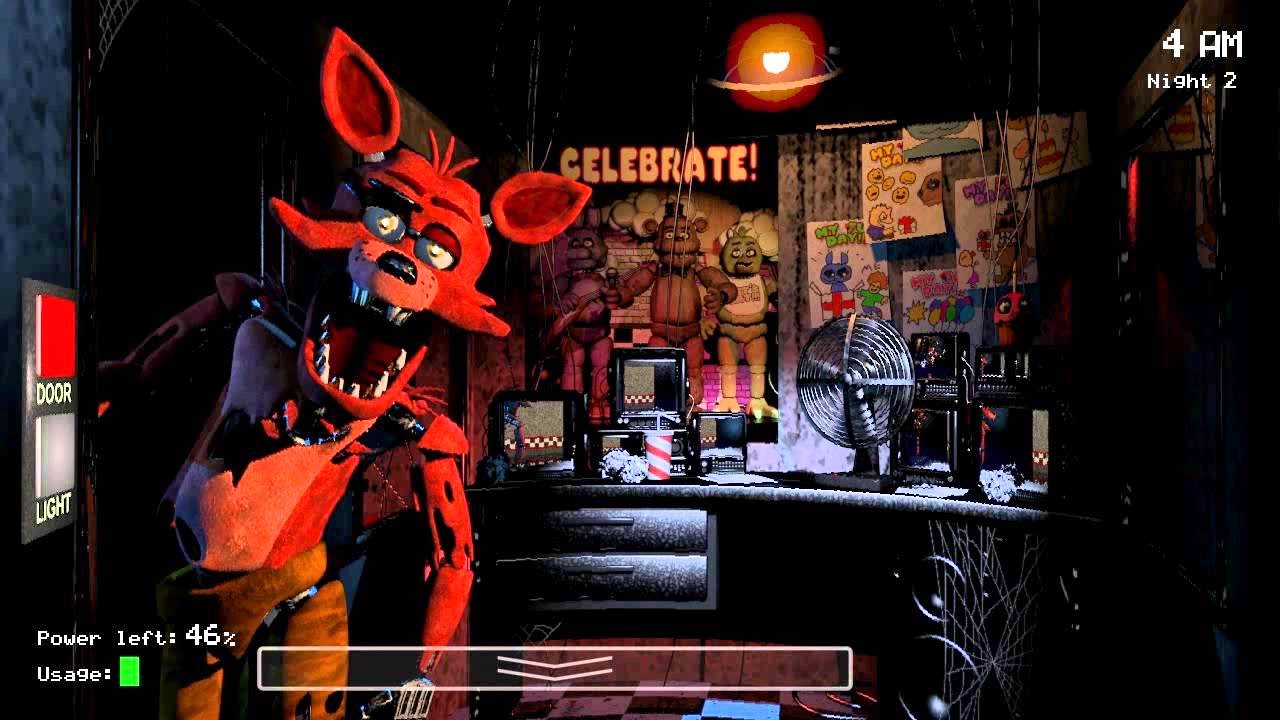 Honorable Mention: Five Nights at Freddy's (PC/iOS/Android)
I have not actually played this game. Nor do I want to, because my undies don’t need a poo marinade. But I’ve watched the hell out of others playing FNaF, most notably Markiplier, and I think this unexpectedly popular little survival horror thingy has achieved modern art status. Developer Scott Cawthon took a decently unique premise -- you’re a security guard at a Chuck E. Cheese’s-type restaurant and its animatronic furry mascots wish you nothing but ill -- and turned it into a minimalist exercise in terror that plays like a deranged game of red light/green light. All you can do is monitor the lurking mascots and pray you’re quick enough to slam the door in their bug-eyed faces...and that your lights hold out for six clammy hours. FNaF’s detractors whine that it’s all jump scares, but what they’re ignoring is the constant sense of dread, oozing into every image. Always more effective than loud angry Necromorph bullshit. I’m in love with the whole FNaF culture. There’s already a sequel. I hope to watch other people be freaked out by Freddy and co. for years to come. 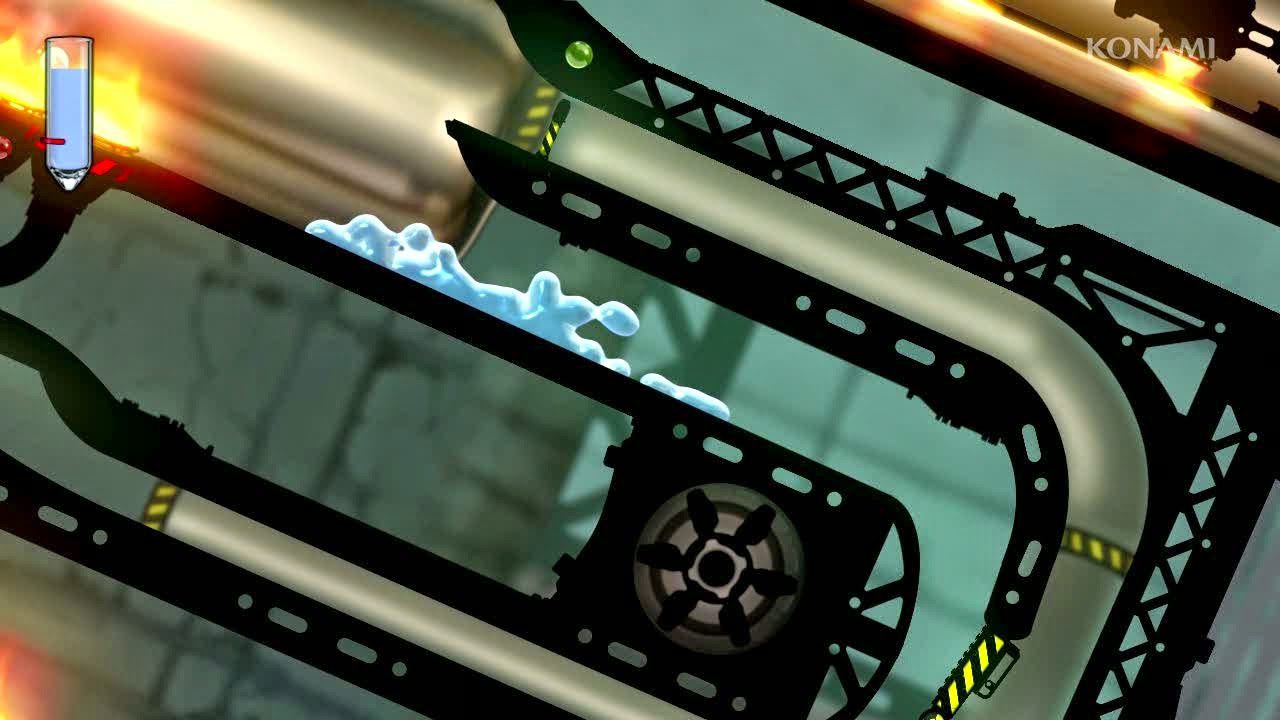 7. Puddle (Multi-Platform)
There’s something profoundly satisfying about a good physics puzzler. The best ones take a simple mechanic and tease it into endless, surprising variations. And that’s Puddle. Its thing is liquid physics: you tilt the screen back and forth (literally, on a tablet) and guide an amount of fluid through an obstacle course. That’s all, but the sheer creative possibilities delighted me. Water, lava, weed killer, human plasma...and I’m not even spoiling the best surprises Puddle has in store. The game’s a worthy spiritual successor to World of Goo, though its whimsy is more restrained. True, Puddle has a brutal difficulty curve and some of the later levels made me tear my hair (I’m gonna have nightmares about the fucking zero gravity sequence), but so satisfying is the gameplay that I kept coming back. And will, for the chance to save another precious fluid ounce. 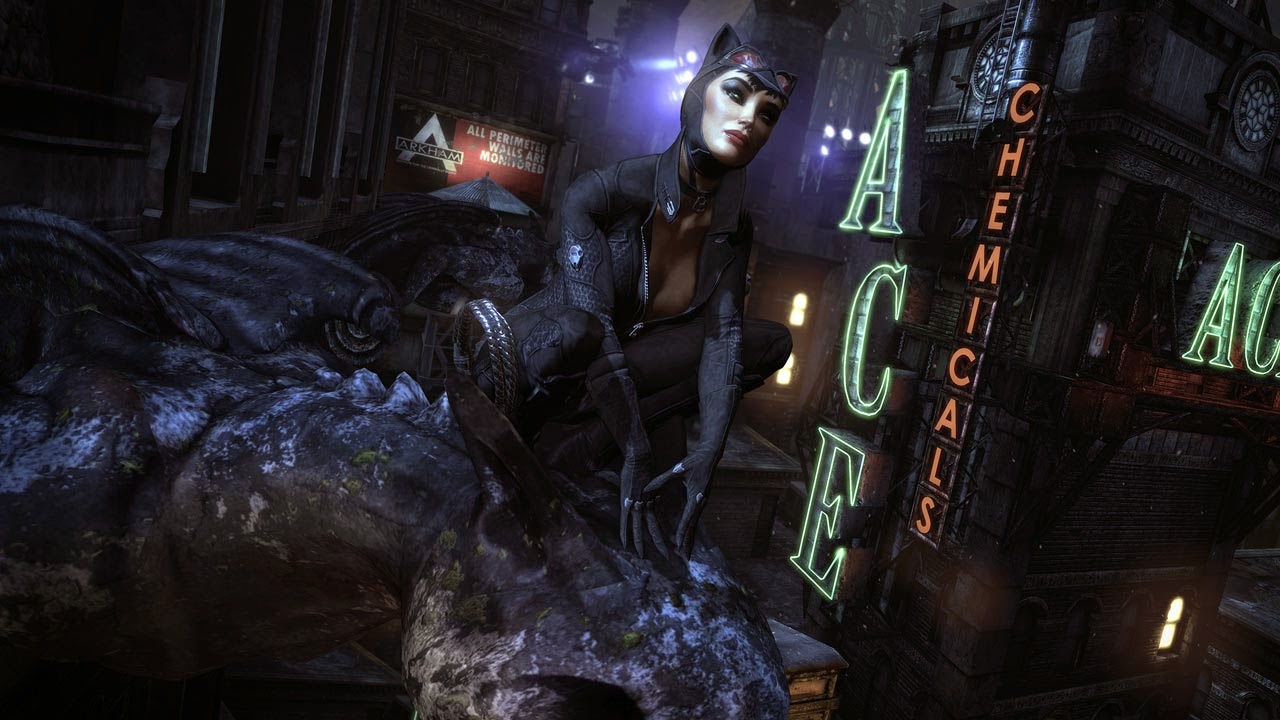 6. Batman: Arkham City (Multi-Platform)
There seems to be a schism between those who prefer the more controlled adventure in Arkham Asylum and those who dig the busy open-world mayhem of Arkham City. I’m in the first camp, but I can’t deny the joys of Batman’s second outing. Tossed into a lawless, neon Gotham, Batman finds that pretty much every one of his major antagonists is crammed in there with him, the Joker’s composing his swansong, Hugo Strange is up to something sinister, and it’s gonna be one of those nights. Sidequests, mysteries, and Riddler puzzles can keep the Dark Knight occupied for hours, but if you’d rather untangle the messy, nutso storyline, go hog wild. You’re freaking Batman! I still say Asylum is better, but City features awesome villain depictions, better boss battles, and controlled blasts of gaming anarchy. Also, Catwoman, who may be a teen boy sex fantasy but still kicks ass, and whose leggy leapfrogging of buildings is more fun than Batman’s patient glides. This game is a worthy take on the mythos in general, campy and grim, kooky and angsty, all the Batman we could ever hope for. 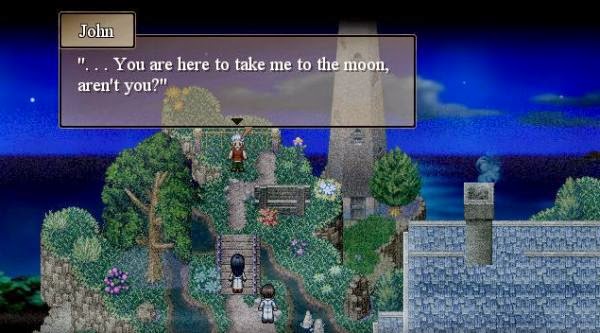 5. To the Moon (PC/Mac)
These next two entries demonstrate the exciting possibilities of storytelling in games. To the Moon is bonkers, full of random humor and little details, and it’ll stomp all over your heart, then mend it again. This SNES-style adventure stars two snarky techs whose company offers dying people a chance to “live” their unrealized dreams within their own minds. Their latest client is an old man who wants to go to the moon, and as they delve backwards through the memories of his life, they realize how complicated their client really is. The Memento school of reverse storytelling allows for tons of resonance and startling twists, and the game gets deeper and deeper into themes of regret, heartache, and ethics. Are we defined by what we want from life, or what we actually get out of it? If you could go back and change the details that made you who you are today...well, how would you know if you were happier, sadder, wiser, anything at all? It’s a super thoughtful unpacking of the psyche and it also has room for jokes about Animorphs; what more could one ask for? 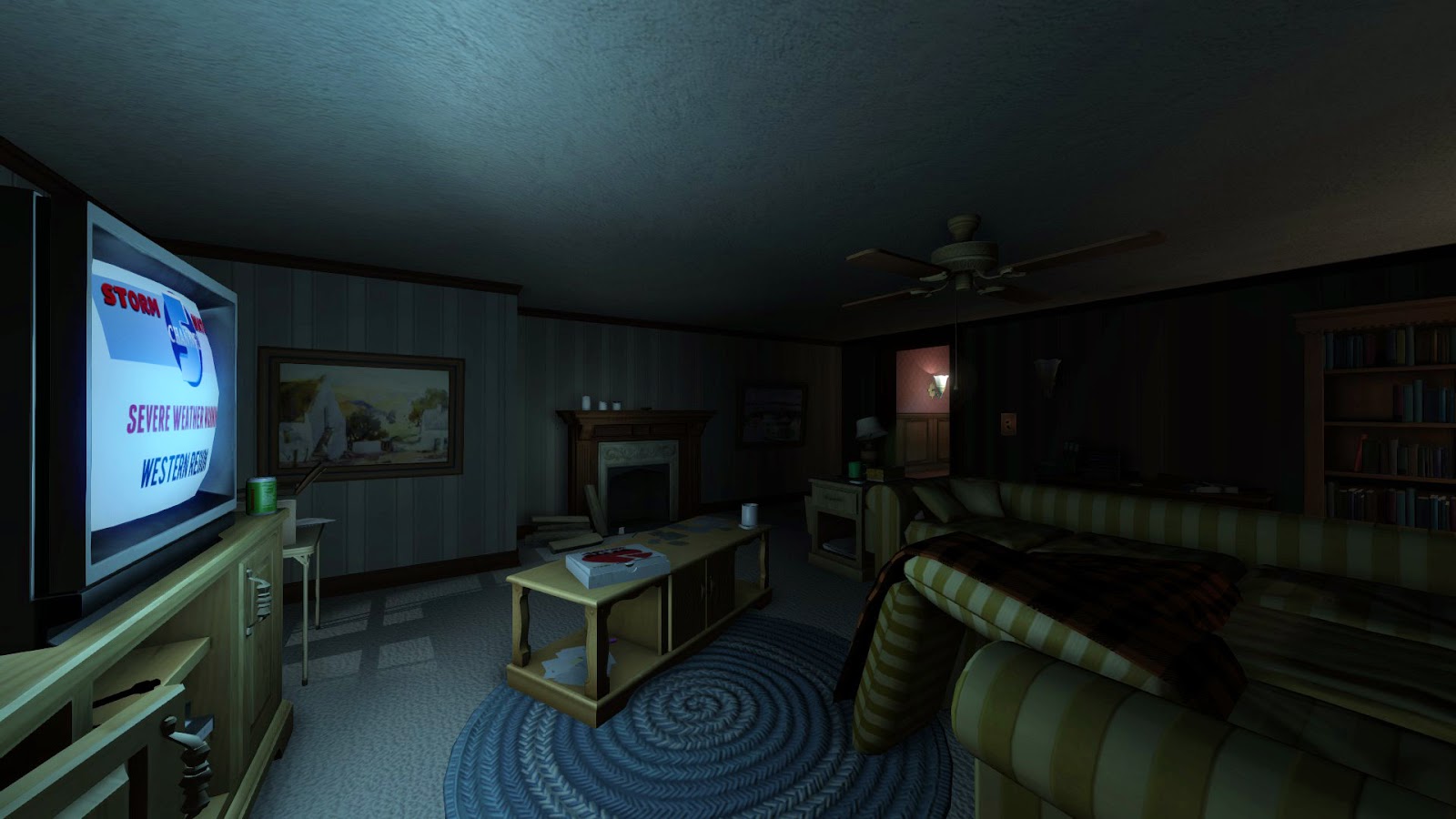 4. Gone Home (PC/Mac)
You are the prodigal daughter. Following a European getaway, you return to your family’s new home only to discover that your parents and sister seem to have vanished. You’re in a creaky old mansion in the woods. A storm rages outside. The phones are down. And is that blood in the bathtub? Gone Home is kind of brilliant in how it takes the tropes of a horror story, then steers them in amazing directions. In order to solve the game’s mysteries, you must meticulously explore the house, opening drawers, snatching clues. I cannot, dare not, spoil the story that unfolds, but it deals with, shall we say, different kinds of scary things in our lives and how we meet them head-on. Set in 1995, the game invokes that era of teenage alienation and defiant music that defined so many so much. I have a fetish for exploration in games and I found myself solicitously switching off lights and closing doors, that’s how immersed I was. It oozes mystery, melancholy, and possibilities. A short little game that leaves a long, deep impression. 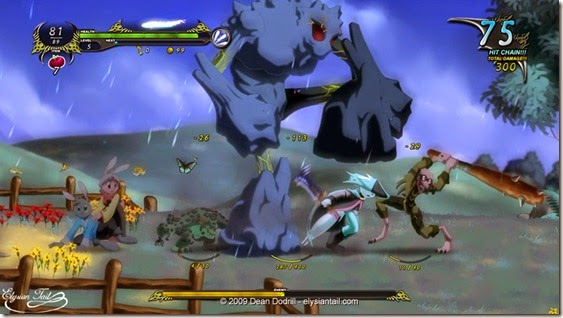 3. Dust: An Elysian Tail (Multi-Platform)
If a formula works, why change it? Dust made it to my top three simply because it’s a classic style of game done to near-perfection. You are, of course, a mighty warrior with a talking sword, a shrill sidekick, and amnesia, who committed dark deeds in the past and must face demons both real and internal. You shear your way through waves of enemies, unleashing deadly button combos, gaining XP, revisiting old areas as you unlock new skills. It’s Golden Axe with furries. And it rules. The combat is streamlined, easy to learn, satisfying to master. The sidekick manages to be more cute and funny than obnoxious. The story is well-developed, as are the sidequests and timed challenges. If Dust brings no new innovations to the table...did we need them? How can anybody be a Grinch and call this game unoriginal when it feels so fresh, so fun? I spend plenty of time applauding games that try new things, but Dust tried something old, comfortable, and familiar. And knocked it out of the park. SEQUEL!!! 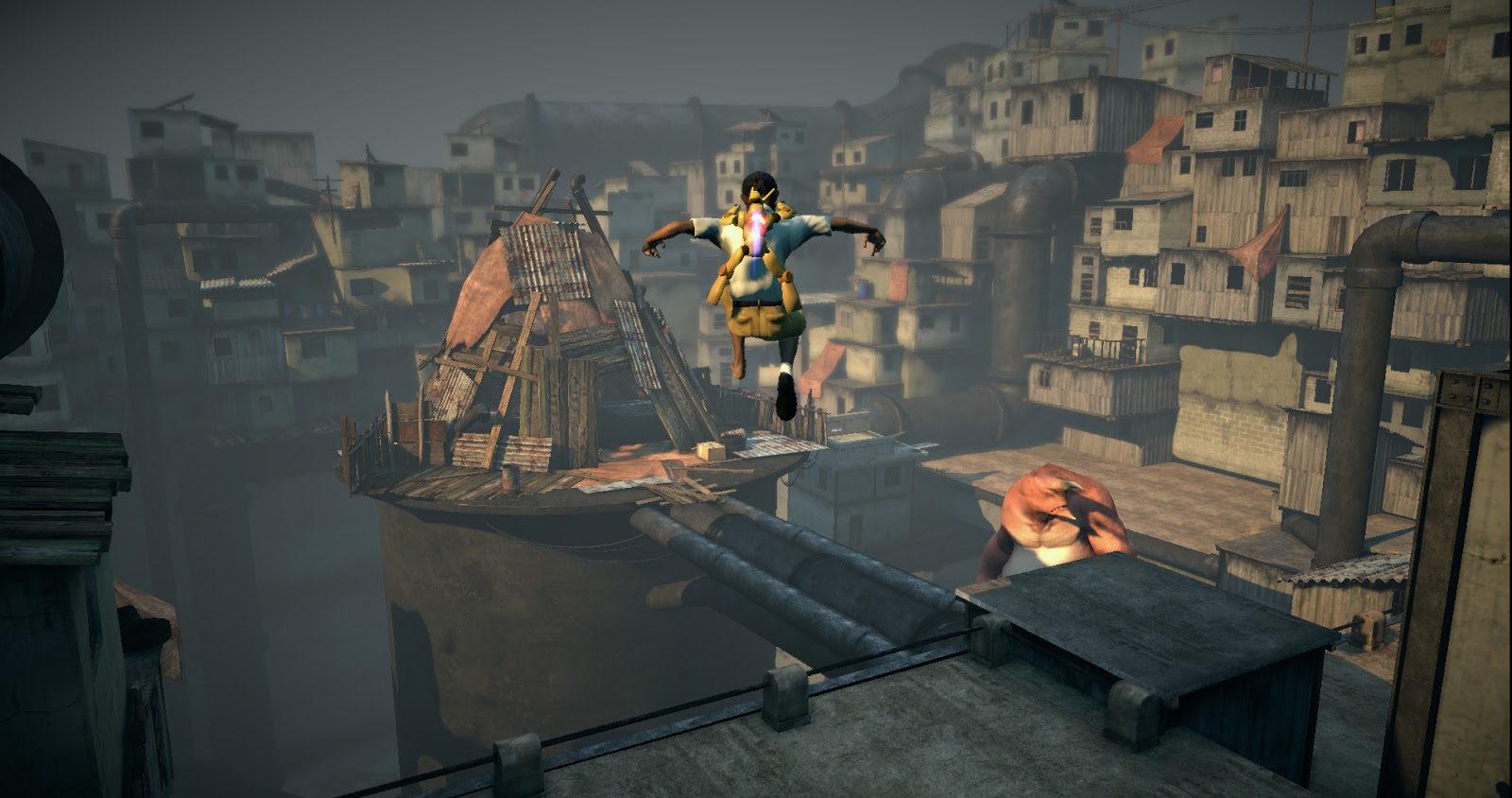 2. Papo & Yo (PC/Mac/PS3)
Enter a world of whimsy and wonder! Laugh and play with your cool robot buddy and a big friendly monster! It’s a boy’s dream! Except...sometimes the monster gets angry. And then he hurts you. And that’s why Papo & Yo won my heart. It’s not just that it’s got the coolest, most unique worldbuilding I’ve seen all year, plopping you into a magical Brazilian favela (think City of God by way of M.C. Escher) where you’ll interact with machinery made from chalk drawings and bend the very buildings to your whim. It’s not just that so few games star anything other than angry white dudes. It’s that Papo & Yo has something real to say. The idea might be fairly well-trodden -- a child escapes into an internal fantasy realm to cope with the unpleasant shit in their life -- but it shows how far we’ve taken the concept since Alice followed the White Rabbit. Papo & Yo was made by and/or for someone who was hurt. It is angry and sad, but it’s still incredibly enjoyable to play. It’s a catharsis. Yeah, it’s too short and the gameplay has bugs, but the effort, the purpose, makes up for technical gremlins. I plan to point others toward it. 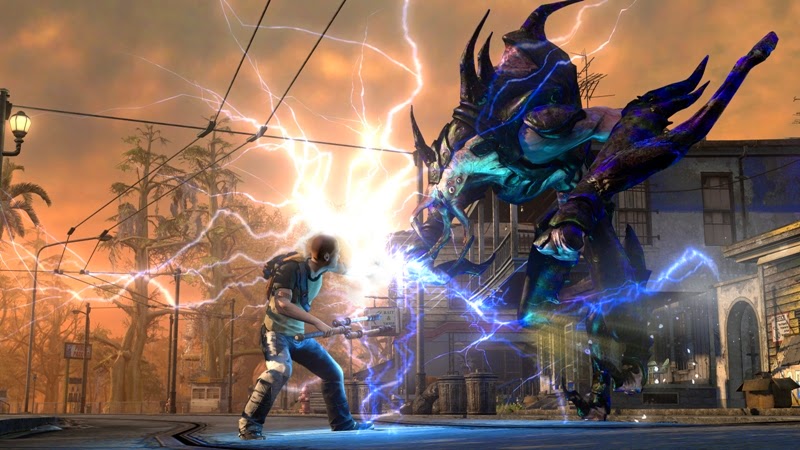 1. InFamous 2 (PS3)
So, in the end, I had to award the gold medal to the game I had the most fun playing. And that’d be InFamous 2, which took an already awesome game and made it awesomer. I had an electrified blast with Cole McGrath in the first InFamous. The sequel is bigger, weirder, smoother, more epic, more emotional, more everything. By exchanging Fake New York City for the more colorful Fake New Orleans, by tossing in everything from mutant swamp monsters to ice-powered South African mercenaries, by raising the stakes as a hundred-foot lava man rampages down the East Coast, and by adding some nuance and weight to Cole’s moral choices, InFamous 2 rocks, rolls, and blasts through my already high expectations. Yay, now you can sneak up on bad guys! And speed-climb buildings! And fly! And...well, it’s one of those games where merely getting around is obscenely fun. Like every game here, it’s got some flaws (pointless upgrades; endless, repetitive mini-bosses), but I’d still rather be Cole McGrath than Batman. Now that I’ve completed the InFamous story arc as Good Cole, I need to try out Evil Cole and wreck shit with even more abandon. This franchise keeps on giving.

And Steam keeps on giving too! Except more indie titles in 2015, and maybe even a PS4 someday! Plus a continuation of the Myst review series. Games games games games games.
Posted by Dang-Blasted at 7:01 PM