Silent Hill 3 -- Kicking It Up a Notch

After Silent Hill 2 was such a triumph, the way forward seemed clear: each game in the series should take the idea further and offer a self-contained horror experience. And that is indeed what happened.....kinda. Sorta. Eventually. Problem was, the first game had introduced all that stuff about the Order and Alessa Gillespie and Harry Mason’s lost daughter, who (spoiler alert) turned out to be a portion of Alessa’s soul made flesh. Alluring as it was, I guess the developers didn’t want to just drop all that completely. Thus, Silent Hill 3 was a direct sequel to Silent Hill 1. Unluckily, this meant its story suffered. Luckily, it continued to build on the ideas of the series and push the horror elements farther -- perhaps a little too far.

I have a strange relationship with Silent Hill 3 in that I love it and find it very playable, while acknowledging that it has some glaring flaws. Maybe if it hadn’t had to follow the incredible numero dos. Again, it’s the story of one person’s descent, but told in a more conventional horror-movie manner. The heroine is Heather, a teenage girl (and the series’s only female protagonist thus far) in a puffy vest and miniskirt, who is enjoying a day at the mall as the game opens. Well, maybe “enjoying” isn’t the right word. It’s hard to think about shopping when you have a horrible nightmare in which you die in a creepy amusement park, then wake up only to be stalked by a private detective and a religious nut with no eyebrows, then discover that everyone in the mall has vanished, it’s pitch-dark, and there are monsters. And, holy shit, Heather’s not even in Silent Hill! Yes, it’s a brand-new concept, the idea that the evil force infecting Silent Hill can reach its tendrils to other places and warp the mind from a distance. The game chronicles Heather’s attempts to make it home, which in turn leads to a trip to Silent Hill itself for some answers. I feel like the big twist regarding Heather’s identity is pretty damn obvious....eh, but I won’t spoil it. 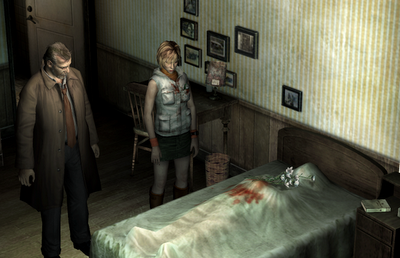 Possibly the best thing about the game is Heather herself. She’s not like James from Silent Hill 2; although she has her demons, she’s a more or less sweet and chipper girl who takes no crap and can think like a mature adult. It’s hard not to fall in love with her and pray for her safety. Problem is, the game thinks she’s also a first-class ass-kicker. Silent Hill 3 is way kinder when it comes to fighting monsters: you get a knife, a handgun, a shotgun, a mace, a taser, a katana, a submachine gun, and (on your second playthrough) a fucking LIGHTSABER. Also, a flamethrower. Did I mention that you’re playing as a teenage girl? These games are supposed to punish you with difficult and unreliable combat. Heather can carve up monsters with relative ease, and it just gets goofy sometimes. It undermines the very good character animation and voice acting which is supposed to be convincing us she’s a terrified, confused child. And speaking of goofy, the monsters don’t really work for me. They’re interesting but very arbitrary, like the developers took all the monster designs that didn’t make the earlier cut. Killing them is fairly easy; after all, you’re a goddamn one-woman arsenal. Also, they’re too noisy. What happened to the earlier emphasis on silence? You can’t have the skin-crawling feeling that something unspeakable is creeping up on you when it’s going, “HI! I AM A MONSTER! RAWR!” One beastie in particular makes one of the most annoying sounds in video game history and I will never forgive Team Silent Hill for its existence.

Don’t get me wrong, the visuals and sound design are quite good. But like I said before, I feel like they’re a wee bit too good. Silent Hill 3 feels too cinematic for my taste. The scary noises are louder, the fucked-up visuals are slicker and way more in-your-face, the violence is ratcheted up, and so forth. In terms of gameplay, it follows faithfully in the wake of Silent Hill 2 and you even get to visit a couple of the same locations, but they decided to do away with most of the subtlety and kick things up a notch, BAM! Sorry, Emeril-san, but I liked Silent Hill better when it was a place of quiet mystery and menace where the lines between real and imagined blur and you can’t trust your own eyes. Here, it’s obvious when Heather enters the nightmare Otherworld because everything suddenly looks like a cross between a boiler room, the world’s least sanitary morgue, and the Saw franchise, and every surface is covered with thick oozing gunk and sludge and blood that Heather will never get off her stylish boots. It’s too HOLLYWOOD. It’s too WESTERN. And it’s worse in retrospect, because it foreshadowed what various non-Japanese developers would do with the franchise. 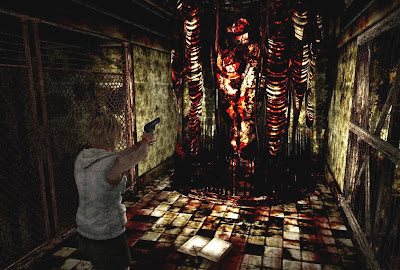 Okay, I’m making it sound like I don’t like this game. I do! I truly do. I said the story was weaker and it is, but the details work. This time around, we learn way more about the Order -- how they function, where they live, what motivates their members. The two human baddies are Claudia, a true zealot who craves the coming of her God, and Vincent, a sleazy creep who’s been cheerfully embezzling the Order’s funds. They both want to manipulate Heather, but for very different reasons. They’re technically on the same side, but they don’t like each other and disagree on fundamental things. I really love the contrast between them and how Heather reacts  with a mix of uncertainty and true teenage disgust. I’ve always found the Order to be a lame addition to the Silent Hill mythos, but if it must exist, I’m glad they dived deeper. (Sadly, the later Silent Hill: Homecoming would reduce the Order to moronic cartoon villainy.) The story is merely weaker when compared to Silent Hill 2, and I really don’t want to fall into the trap of comparing everything to the one game I worship. So let me reassure you that Silent Hill 3 is probably the second-best game in the series. (I personally liked Shattered Memories more, but that game stands alone, as we’ll see.)

Well, if Silent Hill 3 did one thing, it was to pretty much wrap up the story begun in Silent Hill 1. Heather’s quest may be overblown at times, but it ends on a good note and seems to suggest a well-earned happily-ever-after...or at least a resolution. So where can the series go from here? It can go into some weird-ass, polarizing places. Next up: the incredibly weird-ass and polarizing fourth entry.... 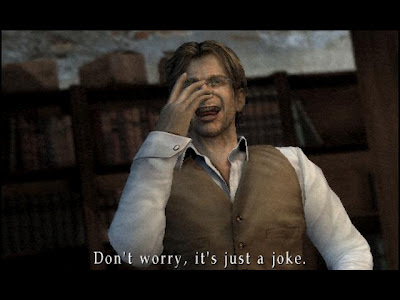