WARNING: THIS IS A REVIEW OF A PORT. I HAVE NEVER PLAYED THE ORIGINAL PSP RELEASE. IF YOU ARE OUTRAGED, THIS BLOGGER HUMBLY SUGGESTS YOU FIND MORE IMPORTANT THINGS TO BE OUTRAGED BY.

After four solid entries, the Silent Hill franchise left the white city of Konami and entered the ramshackle shanty town of Western developers (Konami did remain as a publisher). This was worrisome. There are profound differences between Japanese horror and Western horror. The former tends to be more understated, showing us how the superstitions of old clash with high-tech modernity, and how subtle terror can creep into everyday life (textbook example: The Ring). The latter leans more towards blood and tits and murder and mayhem. Of course, Silent Hill had plenty of that, but how to marry two different sets of aesthetics? When Climax Studios got handed Silent Hill: Origins, their strategy was to toe the line like their lives depended on it, and the result was the only Silent Hill game that works as a screwball comedy. 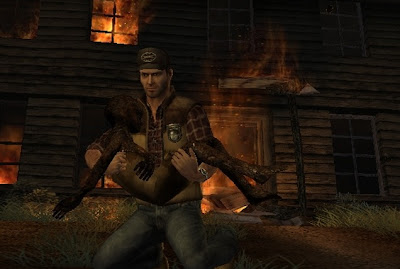 I mean, look at it. You play as a stereotypical trucker in a redneck cap and plaid flannel, whose actual name is Travis Grady. (There’s a reason you never see an astrophysicist or ballet dancer named Travis.) You’re in Silent Hill, but rather than just fucking leaving, you run around collecting pieces of a magical pyramid puzzle just because that Alessa Gillespie chick says you should. Your weapons break, but there are literally dozens to find and a bottomless inventory, so you wind up with, no exaggeration, two toasters and four samurai swords and three hatchets and a handful of portable TVs, bedside lamps, police truncheons, propane canisters, crowbars, IV stands, and sledgehammers. So you’re basically a superhero, who is also maybe a serial killer, and there are a bunch of references to Lewis Carroll and Shakespeare’s Tempest in a quaint attempt on the game’s part to look smarter, and the final boss is the goofiest-looking thing ever. And the best part? This is supposed to be a prequel, giving us the story of how the town of Silent Hill first became all foggy and monster-infested -- only while you’re running around collecting the pieces of the Triforce, the town is already foggy and monster-infested with no explanation! It’s so funny! I giggle so much while playing this alleged horror game!

So it’s awful, right? Ha, fake-out! I actually like Origins quite a bit and think it’s a very solid, enjoyable addition to the series. I just acknowledge that it’s also the stupidest. Its mistake is to climb in bed with the weakest of the Silent Hill plot elements, which is the Order and the story of Alessa. Not only is that story lame, but it was already told. It’s dangerous to make a prequel because you’re slotting in something that was never mentioned before and expecting people to buy it wholesale. Travis saves Alessa from her burning house and then....he’s just there, running around collecting that stupid Magic MacGuffin Device and meeting younger versions of the characters from Silent Hill 1, whose contribution to the plot is absolutely nil. Yeah, they give Travis a tragic backstory, he must Face His Demons, and there’s that whole might-be-a-serial-killer thing, which is demonstrated by this game’s version of Pyramid Head, a hulking dude with a meat cleaver and a mask covering half his face. How’s that for subtle symbolism? Basically, every time a cutscene starts, I roll my eyes because I know the atmosphere is about to be ruined by the torturously stupid chain of events that Origins calls a plot. 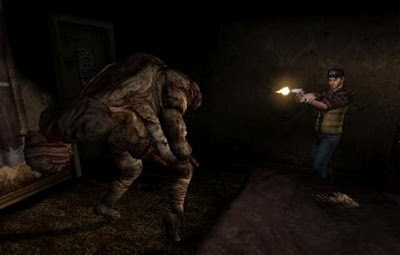 That said, everything else about the game is pretty damn good. It looks good, it handles good, and while it adds little to the table in terms of gameplay, it’s still fun. One of the upsides of copypasting everything from the earlier games is that the quality stuff carries over as well. While Silent Hill 3 and 4 snuck in an alarming amount of linear progression, Origins brings the emphasis back to exploration and searching, which I far prefer. There’s a blast of nostalgia when you visit the same hospital from the first game, and the other indoor environments -- an asylum, a theatre, and a motel complex -- are huge and sprawling and filled with nooks and crannies. I get a weird sense of pleasure from watching lots of little red squiggles appear on the game map as I methodically check every door. Adding to the fun is the fact that Travis can switch between foggy pseudo-reality and dark, twisted Otherworld by touching mirrors. Yeah, it’s less scary when the Otherworld can’t suddenly pounce on you, but it forces you to think, especially when puzzle-solving. I think the puzzles in Origins are some of the best in the entire series -- arbitrary, but also clever and satisfying to figure out. The monsters are alright, though a couple are copied straight from earlier games and fighting them isn’t much challenge when you have enough melee weapons to fill a dump truck. And there’s QTEs. But what can you do?

I’m kinder to Origins than a lot of Silent Hill fans were. I can’t do what I did with The Room and say it deserves points for creativity. It’s not creative. It stamps out the Silent Hill formula with such care, such blockheaded determination to follow the established order. And all the fear and dread of Silent Hill vanishes when the intangible evil of the town is centered around a goofy occult relic that Nathan Drake would stick on his bathroom windowsill. Yeah, Silent Hill 1 did that shit too, but let me just remind y’all that I think Silent Hill 1 is the weakest game in the series. Origins is better because of its superior graphics and solid gameplay, but in terms of plot and characterization, it’s a joke. But I like it anyway. There’s something to be said for refusing to fix what isn’t broken, and I rather wish someone had told that to Double Helix Games when they got to make the fifth official entry in the franchise. Next up, Homecoming...an over-the-top American gorefest that has Silent Hill in it for some reason. 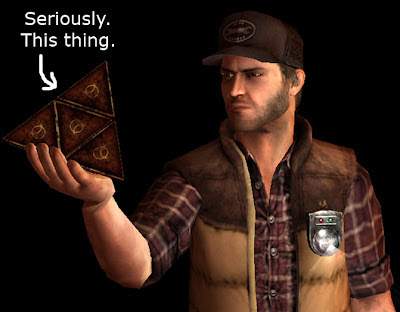