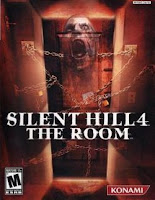 And so we come to the strange chimaera that is Silent Hill 4: The Room. Rumor has it that this was supposed to be a standalone survival horror game, but Konami repurposed it as a Silent Hill sequel partway through. I can only speculate on this game’s development process, but the final result, while maintaining the feel of a Silent Hill game, also seems to fragment into frayed conceptual threads. If Silent Hill 2 is the scariest of the PS2 Silent Hills and Silent Hill 3 has the best graphics and gameplay, then number four is the most experimental. As a result, it is probably the least-liked Silent Hill game of them all. Many devoted fans hate it and don’t think it belongs.

I’m here to confess that I have a deep fondness for it, despite -- and because of -- the things people don’t like. Crazy bastard that I am. 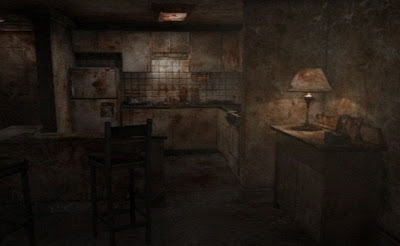 The town of Silent Hill does not appear in The Room. You play as Tommy Wiseau, a frustrated actor/director who.....wait, sorry, that’s something else. You play as Henry Townshend, a freelance photographer who has just moved into Room 302 of the South Ashfield Heights apartment complex. Cozy new pad, hot next-door neighbor, hipster occupation...life is good for Henry. Until he wakes up one morning to discover that the door is covered in chains and padlocks. He can’t get out, and no one on the outside can hear him. On the fifth day of his imprisonment, a black hole appears in the bathroom wall. Henry crawls through and finds that reality is no longer following any sort of rulebook. The hole leads to a series of locations that are sort of real and sort of not -- but Henry finds other holes that allow him to return to Room 302 at his leisure. His search for an escape route leads to a series of grisly murders, which lead to gradual insights about a very scary man named Walter Sullivan, a product of Silent Hill’s child-brainwashing operation, who....well, what he has done, and still plans to do, is fucked up. And Henry is involved whether he wants to be or not.

The Room holds onto some of the series staples -- the fixed camera angles, the hospital level, Akira Yamaoka’s eerie music -- but makes some rather drastic changes as well. As mentioned, Henry has to repeatedly return to his apartment (where the camera switches to a first-person view) because that’s the only place you can save your game. I like the gimmick; it’s kind of comforting to have a safe zone. You can find messages slipped under the door, or look out the peephole at your neighbors, or use stuff in the apartment to solve puzzles. And then, halfway through the game, Room 302 starts to become dangerous and frightening as well. Watching the deterioration of your secure home works on a psychological level, and hey, Silent Hill is all about that. The other big change is that you have a limited inventory and must juggle weapons, health items, puzzle items, and so forth. Don’t worry, though, you can store the extra crap in a special trunk. And if that sounds ripped off from Resident Evil...Yes. Yes, it probably is. But it adds an element of strategizing. Some weapons break and others are useful against specific supernatural foes. What will you take on your next foray into the dreamworld? 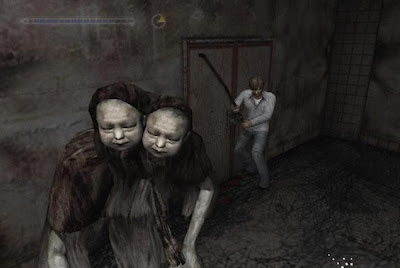 So, I like those changes. What don’t I like? Well, I don’t really like Henry himself. I can’t tell if this was deliberate or not, but he looks and acts like a massive stoner. Think Keanu Reeves. He barely bats an eye when confronted by hideous monsters and the thorough raping of the laws of physics. I’ve encountered people of the female persuasion who find Henry’s spaciness dreamy, so maybe I should just shut up. I also think the environments and monsters are kind of uninspired -- well, except for the cool rotating prison and the creepy cloaked thing with two baby heads. There’s more combat and less puzzle-solving, and that sucks. But let’s talk about the thing that absolutely everyone hates: the fucking Victims. The Room’s most persistent and frustrating foes are a series of ghosts that show up everywhere you go. They cannot be killed. You can stun them, but they’ll get back up. You can pin them down with special swords, but there are only five of these swords in the game and once you use one, it’s gone, unless you free the Victim again. Lastly, they drain your health just by being near you. What the fuck. Okay, yeah, it’s kind of a cool idea, but its implementation makes you want to scream. The Victims often appear in tight, narrow areas where you can’t evade them. And they can teleport, kind of, so you can’t outrun them. There is NOTHING about them that doesn’t suck. 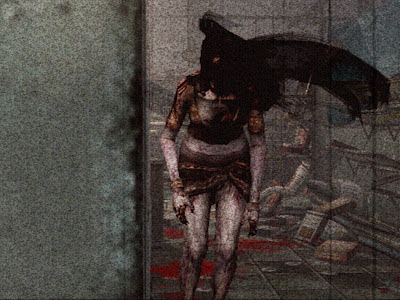 I respect The Room for daring to be different. I honestly would rather that a game series try to play with ideas instead of stamping out the same game over and over. This particular sequel took a lot of chances, and not all of them paid off. There’s a tug of war between the tedious gameplay elements and the story, which is really good. Seriously, the tale told in The Room is soooooo much better than anything involving the Silent Hill Order, and the mystery unfolds with perfect timing. At the same time, the game goes on for too long and in the second half, you just revisit all the levels a second time. With a female sidekick who needs constant protecting. And an invincible villain who chases you around with a chainsaw and pistol. And even nastier, more powerful ghosts. Then it pulls itself together for a very solid endgame. Then it suffers a concussion and gives you a very shitty, frustrating final boss. It’s good, and then it sucks. It’s inspired, and then it’s dreary.

Well, I like Silent Hill 4: The Room, warts and all. I think its strengths are just enough to make up for its weaknesses. If you like a game with a good story, here you are. It actually works well as a sequel to Silent Hill 2; the two games do refer to each other, and The Room recaptures some of the silence and subtlety, the air of great mystery and dread lurking just out of view. It’s scary! Too bad a lot of the fear comes from knowing that the gameplay’s gonna turn miserable again as soon as another unkillable ghost turns up. So, while I don’t always get along with it, I do think it’s a worthy addition to my favorite franchise. It’s probably gone further into the Bizarro Zone than any other Silent Hill game, and it deserves merit for that alone. Also, it was Konami’s last hurrah before the damn round-eyes took over developing the franchise. After this, things got.....lost in translation. 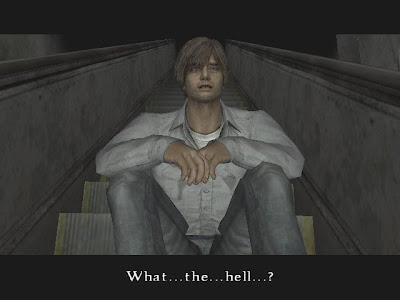