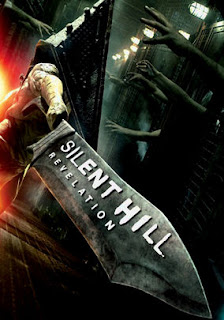 Silent Hill: Revelation 3D -- No Time To Explain! Get In the Vest!

One of the first things you see in Silent Hill: Revelation 3D is Pyramid Head operating a merry-go-round. Other sights include a ghoulish nurse getting tasered in the cleavage, Malcolm McDowell transforming into a Silly Putty monster, and kids in Ranger Rick makeup eating decayed flesh birthday cake. This is the point where a typical Silent Hill fan would put a bazooka to their head and pull the trigger (bazookas have triggers, right?), but let’s keep going for the sake of professionalism. And giggles.

I’m quite happy to be revisiting my Silent Hill review series, if only to explain, with relish, how terrible and retarded this movie is. It’s a direct sequel to the first Silent Hill film adaptation, which, if you recall, I thought was fairly acceptable. Nothing much is acceptable about Revelation, but somehow, I am inclined to be kind to it as long as I can also tear it a new asshole. Maybe it’s because I watched this one with my best friend and was mildly baked. There’s “hate-watching” and then there’s “baked-watching.” So I’d put Revelation on the revered list of shitty films that you can’t help but enjoy on some delinquent level. It was clearly made by fanboys -- the type of fanboys who sit around talking about how much COOLER something could be if it only had THIS and THIS and AWESOME BADASS WOOOOOO! Oh, do they work hard to please us. 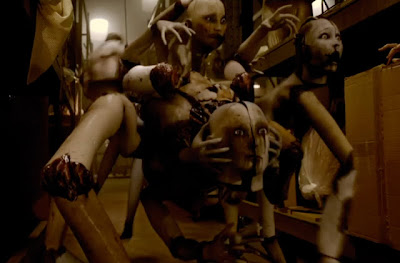 Now I’m going to do what the movie does in buckets, and explain stuff. Revelation is based on Silent Hill 3 and is actually a close adaptation of the game, apart from certain not-very-minor character changes. Spoiler alert: the first film ended with heroine Rose DaSilva (Radha Mitchell) dying or something, leaving behind her husband Chris (Sean Bean) and possibly supernatural daughter, Sharon. Some years have passed, Chris is now calling himself Harry Mason (OMG, LIKE IN THE GAME!!!) and Sharon goes by the name of Heather (Adelaide Clemens). They move a lot and change their names because...well, Heather just sort of accepts her dad’s non-explanation, but the real reason is that the Order of Silent Hill wants to drag Heather back to their shitty town so she can become a vessel for their god. Story of all our lives, right? Heather begins to have awful maybe-nightmares, Chris/Harry gets abducted, and it’s up to Heather to seek out answers and get explained at. A lot. A whole goddamn lot. Yeah, I’d say the worst thing about Revelation is its script. There is soooooo much ham-handed explanation. Reminding us what happened in the first movie. Outlining the convoluted story behind Heather and Alessa Gillespie. Reiterating the stakes. Even trying to explain Pyramid Head, as if he needs it. Occasionally, the movie takes a break from endless exposition to have Heather run around and react to things.

It’s a good-looking movie, I’ll give it that. Heather galumphs through a string of diseased environments (OMG, LIKE IN THE GAME!!!) and you can almost smell the filth and communicable diseases. Even the real world looks grotty. The monsters are pretty cool too, a mix of the usual suspects and brand-new creations. Sadly, it seems as if we still can’t forget about fucking Silent Hill: Homecoming, which was a big aesthetic influence here. No subtlety, no understatement, no quiet moments. Revelation refuses to pause for breath, which makes it an inferior sequel indeed. And, inevitably, blood and digits and pointy objects are always being shoved up the cameraman’s nostrils, because THREE DEEEEEEEEE! Ah, well, the film’s more than satisfying in the fucked-up, Jacob’s Ladder-style imagery department, though it’s never all that scary. I’d say the niftiest sequence takes place in a mannequin storage facility (OMG, LIKEINTHEGAME!!!) occupied by a nicely unsettling boss...uh, I mean, boss. I mean monster. 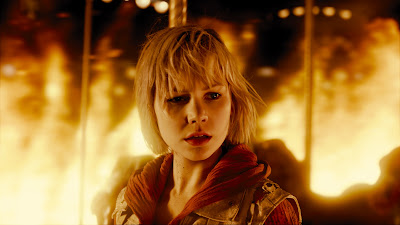 All of this nonsense would be a lot harder to digest if not for Adelaide Clemens as Heather. I have no idea who she is, but they nailed the casting. Like her onscreen mom, Radha Mitchell, Clemens mainly has to act terrified yet determined, and run around unsanitary hallways while demanding answers, dammit! But Clemens takes the easy role and ridiculous dialogue and makes it quasi-believable; she’s vulnerable, she’s badass, and I even bought that she was a teenage girl. Thank God for her, because the film’s a one-woman show; apart from Heather, none of the characters have much screen time. This cameo club includes not only Bean and Mitchell, but also Martin Donovan as private detective Douglas, Deborah Kara Unger returning (very briefly) as Dahlia Gillespie, Malcolm McDowell as whoever the hell he is, and poor, poor Carrie-Anne Moss as the evil and eyebrowless zealot, Claudia Wolf. And, of course, the Vest. Adelaide Clemens totally rocks Heather’s signature poofy white vest, and the filmmakers treat said article of clothing with nerdy reverence. Chris/Harry gives her the Vest for her birthday, and later she rips off her coat to expose the Vest, and the Vest stops giant monster knives and is probably made of angel hide, who knows. The Vest is way more compelling a character than Vincent (Kit Harington, who, by appearing alongside Sean Bean, is probably making Game of Thrones fans very confused). In the game, Vincent is a sleazy, villainous, embezzling member of the Order who gleefully fucks with Heather’s emotions and is old enough to be her uncle. In this movie, Vincent is a dreamy teenage love interest with pouty lips and a very poorly-telegraphed “secret.” Ugh. Thanks to this switcheroo, Detective Douglas -- a dependable sidekick throughout Silent Hill 3 -- gets about two freaking minutes of screen time here. Again, ugh.

I just can’t loathe this movie, despite how badly it rapes the source material. The makers of the first film seem to have gotten what makes the original three or four games so effective. The makers of Revelation don’t get it at all, but they so desperately want to look cool. They’re like eleven-year-old boys playing with action figures. There’s so many “OMGLIKEINTHEGAME” moments, from Heather’s vest (which probably had its own trailer) to the frequent appearance of  Robbie the Rabbit, and beyond. All of these shout-outs unroll before our eyes on a silver platter, begging to be approved of. Most of the major iconic sequences from Silent Hill 3 are recreated with care, and then at the climax, they declare “Screw it!” and give us something that I will only identify as a “Monster-Off.” It is either the worst and most offensive crime to be inflicted upon the esteemed Silent Hill brand, or shamefully brilliant. It’s followed by an ending that not only sets up a threequel, but very blatantly invokes two -- TWO -- other games in the series. Jesus, this movie is a retarded puppy. You threw the ball and the puppy waddled after it, rolled in rotten meat-lover’s pizza, took a shortcut through the sticky dildo factory, and ultimately brought you an aborted walrus fetus instead of the ball -- but when that retarded puppy looks up at you with its wet, clueless, hopeful eyes, you just have to give it a pat on the head.

But you never throw the ball for it again, because you’re not fucking retarded yourself. Let’s get someone classier on the next film, hmmm? But Adelaide Clemens and Sean Bean can come back; they’s cool. Kit Harington should stick to M-rated epic fantasy television. Carrie-Anne Moss needs to locate her long-lost film career. I’ll play Henry from Silent Hill 4; check out my stoner gaze! Anyway, farewell until the next time they drop some new disrespectful Silent Hill product into our laps. Or until they remember why it was originally so amazing. If.