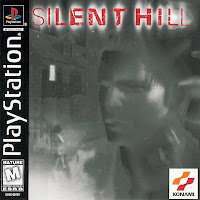 Silent Hill -- A Good Town to Grow Dead In

Let’s sit down around the campfire for a few minutes and talk about horror. Horror is much harder to capture than you think. It’s far more than just having dudes in masks jump out of dark spaces and machete horny bimbos in half. That’s just cheap surprise. Real horror creeps up on you, slithers under your skin, and takes over your body, imbuing you with a mix of paralysis and shivery pleasure. It’s hard to describe. I can’t quite say why I chuckle at the Friday the 13th movies, yet am rendered fetal with terror while reading “The Wendigo” by Algernon Blackwood. It’s different for everyone. But there are some accepted universals.

The Silent Hill series is my favorite video game franchise of them all, largely because it’s truly scary -- in fits and starts, anyway. It’s scary because it doesn’t draw a line between the player character and the nightmare. It sucks you into its fear and implies that you are not an observer or survivor, you are part of the horror, maybe even its author. It’s cerebral and, at its best, quite subtle. You don’t realize that you’re terrified until you’ve been playing for seven hours and your fingers are perma-locked around the controller. Because fear is a drug. And I’d like to discuss my addiction. So welcome to Part One of my Silent Hill review series. I’m gonna go over all the console games and, as a bonus, the 2006 film. Put on your wellies and grab a jumbo iced tea because it’s RETROSPECTION TIIIIIIME! 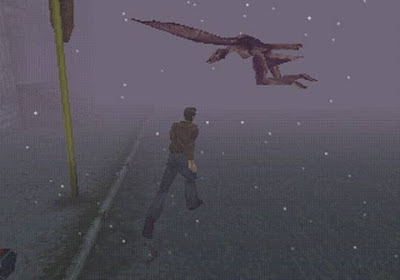 First, the backstory. Silent Hill is a lakeside tourist town somewhere in America (Maine, possibly, or West Virginia) that, according to the guidebooks, is a serene and welcoming haven where visitors of all ages will have a gay old time. Ho ho ho. Actually, the town was built right on top of an undefined, intangible evil that tends to infect the mind and soul. Behind the picturesque scenery and quaint small-town charm, something is wrong. The town seems to attract foulness; prisoners are locked up underground, children are brainwashed in the woods, there’s a rather unusual drug trade, and a pseudo-Christian religious cult known as the Order has the town in its grip. By the time you, the player, arrive on the scene, Silent Hill is choked off from the world by fog and falling ash, its inhabitants are missing or butchered, and there are monsters. Lots and lots of fucked-up monsters. Who are possibly ordinary people that you are perceiving as monsters. As if that weren’t bad enough, the town’s reality sometimes shifts into a lightless, rusty, bloodsoaked Otherworld where anything can happen. And it does.

This is what you’re flung into in the first game, which was released in 1999 by Konami. It’s a terrific premise, the game rocks, and I’m now going to upend expectations by saying that I find Silent Hill 1 to be the weakest in the series. Oh, well. Its blahness is mainly due to technical limitations, which I’ll get to in a moment. You play as a widower named Harry Mason, searching for his young daughter, who has a strange connection with Silent Hill. (SPOILER ALERT) Your search through the town leads to the discovery of Alessa Gillespie, a girl with possible psychic powers who was intended as a sacrifice for the Order. Needless to say, things did not go well, and Alessa became a catalyst for the evil force that presides in the town. Harry just wants to find his kid and go home; he’s your typical everyman, forced to be an unwilling player in a game he doesn’t understand. The gameplay introduced most of the series’ trademarks: thick fog, low lighting, disorienting fixed camera angles, a radio that buzzes with static when monsters are near, and a whole lot of ambiguous symbolism. The sense of being alone and ignorant, of stumbling along with little to no knowledge of events, would also become the norm. And on a horror story level, it’s brilliant. There’s no comfort. No relief. You can’t predict what will happen next, and you dread every monster because Harry’s fighting skills are desperate and amateurish. It puts your mind through the wringer. 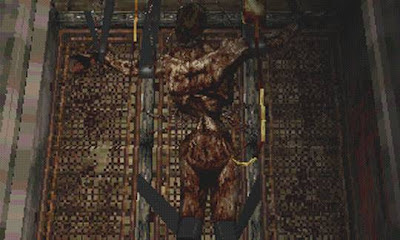 Where the first Silent Hill game fails, for me anyway, is on a technical level. Yeah, I respect it as The First One, but it hasn’t aged too well. The PS1 graphics just look bad, and one suspects that the fog and darkness were partly conceived to hide the sloppy visuals. The controls are clunky as hell; Harry movies like a tank with its treads covered in used chewing gum. Also, this was back before there were small armies devoted to redubbing Japanese games, so the English dialogue and voice acting are painful. Harry asks “Have you seen my daughter?” in the tone of voice one would use on the phone with one’s tax accountant. The sound design is pretty good, as is the music by Akira Yamaoka, who provided this and future games with a mournful, quietly unsettling soundtrack that’s masterful in its subtlety. Even then, it doesn’t quite hold up. The game’s other problem is that it’s too vague. Ambiguity is fine, but Silent Hill 1 is so stingy with its plot details that it fails to satisfy; I actually appreciated the film version for clarifying what the hell was going on. Of course, like I said before, lack of answers makes for a more harrowing experience.

I think it’s just me. I mourn the fact that I never knew the experience of playing this game for the first time, back when the first PlayStation console was still the bee’s knees. It would have blown me away, I think. Because the sheer shivery enjoyment of these games rises above any technical issue. There is nothing quite like them. They whisper in your ear while tickling your neck with a knife blade. Play them late at night with the sound turned up, if you dare. They’re fucking scary, and as we’ll see, the next game in the series took all the good stuff, discarded the bad stuff, and ended up a minor masterpiece. 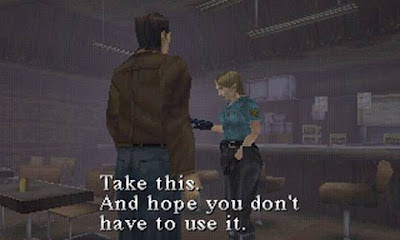