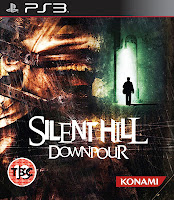 The evolution of the Silent Hill series (some might say de-evolution) is certainly interesting to experience. From humble beginnings, the franchise peaked quickly and then descended into a sometimes brilliant, often frustrating stew of experimentation and tweaks to the material. I feel like the Glory Days are gone; we probably won’t get anything else as good as Silent Hill 2, at least not while anyone other than Konami is building the world. With our expectations adjusted, let’s take one more stroll down those broken, misty streets as I talk about the latest game, Silent Hill: Downpour. This review doubles as a follow-up to my Cautious Enthusiasm post.

First of all, the elements really aren’t kind to the town of Silent Hill, are they? We’ve had fog, ash, smoke, snow, and now rain. I can’t wait for Silent Hill: Typhoon and Silent Hill: Everything Is On Fucking Fire.

Alright, let’s get the bottom line out of the way first: I give Downpour a thumbs-up, despite acknowledging that it’s nowhere near as good as the first few games and has some big flaws. I give this verdict a lot, don’t I? The gamemakers this time around are clearly in love with the material and Downpour plays as a tender homage, with so many shout-outs to previous titles that you can make a drinking game out of it. Once again, it’s trying to be more like Silent Hill 2 than any other (drink!), but it’s actually bold enough to try tossing some new things into the formula. You play as Murphy Pendleton, a taciturn chap who’s spent some years in prison for crimes that are initially unknown. Considering that the game opens with Murphy bribing a corrupt guard and brutally assaulting a fat guy in a prison shower, we can deduce that he’s in the clink for more than tax evasion. Murphy’s being transferred to another prison when the bus crashes due to lack of road. I’ll give you one guess where. Murphy would like to run for it, but he’s being chased by a lady cop (drink!) with a mysterious grudge against him, and the town itself isn’t gonna let him go without a psychologically tormenting tug-of-war. 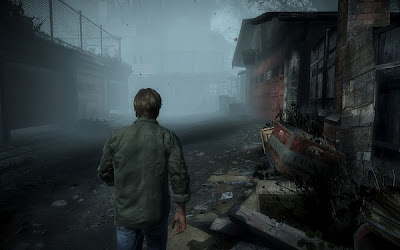 Probably the thing I like most about Downpour is the look and feel of its setpieces. We’re in a whole new section of town, which begs the question of how Silent Hill can keep expanding when there’s fucking nobody there, but whatever. The word that popped into my mind as I explored the streets was wartorn. This version of Silent Hill looks like the site of a long, desperate battle that the humans lost. The roads are shattered and choked with makeshift barriers. The houses are shut and fortified. Sinister cop cars, not driven by cops, are on the prowl. Here and there, the earth has opened up into vast chasms, and the buildings teeter on the brink. It’s easy to get lost, and there are countless nooks and crannies where Murphy may find useful items, or even sidequests. Yes, there are sidequests, which is pretty awesome. Most of them take the form of little mini-stories, glimpses into other people’s tortured lives. And make no mistake, they’re not easy to find. Determined as I was to complete as much of the game as possible, I had to consult a walkthrough frequently, and do a ton of backtracking. It’s refreshing that the game is nonlinear and refuses to pander; you seriously have to pay attention to find all the secrets, and that’s good. I honestly loved this take on Silent Hill; it felt real and dreamlike at the same time.

Wish I could say the same for the Otherworld. We know that Silent Hill tends to shift into nightmare mode, but what makes it scary is that you’re still in the same place; it’s just hideously changed. Earlier games force you to re-explore the map, freaked out by the ways in which the familiar environment has become alien. In Downpour, the Otherworld sections have no connection to reality; they’re fucked-up pocket universes without rhyme or reason, and they tend to play out like the world’s least enjoyable carnival rides. Also, Murphy’s always getting chased by this giant red-lit smear that apparently wants to microwave him to death; it reminded me of one harrowing sequence in Silent Hill 3 (drink!), but it takes most of its cues from the chases in Shattered Memories (and drink again!). I don’t think it works as well as either one of them; it’s not scary or even that interesting, just an annoying chore that you often have to try multiple times. Overall, the Otherworld is kind of dumb, more of a grisly theme park than a twisted reflection of reality, and I’m glad the game doesn’t spend too much time there. 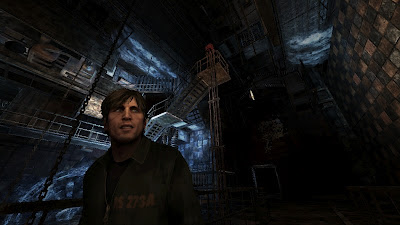 Now, what about all the details? Well, combat manages to be simplified and convoluted at the same time. You can only carry one melee weapon and one firearm; the former will break over time like in Origins (drink!), and the latter has few bullets. I liked this basic system and there’s never a lack of long skinny things to hit monsters with, but I rarely used a gun at all, mainly because you have to drop the melee weapon to wield it. The various functions were a bit confusing; pretty much every button on the PS3 controller does something, and I had trouble remembering what was what. The trademark flashlight and radio get a nice upgrade, though. Murphy eventually finds a light with a UV feature that enables him to find invisible clues, and he also gets a police radio, which plays actual dispatches when monsters are near. And the monsters? Eh, they’re alright. There’s not many types and they’re all quite humanoid, which is a different take on the material, to be sure. I didn’t find them scary but they could be startling. Far creepier is Murphy’s clothing, which appears to be an organic lifeform that secretes and absorbs blood depending on its wearer’s health. Also, at random times it will begin to rain, lightly at first and then torrentially. Monsters become more numerous and violent in the rain, and Murphy must seek shelter. Nice touch.

Problem is, a lot of what we get in the game is arbitrary. The constant rain is a pretty vague metaphor, considering it’s in the freaking title. Likewise, it’s hard to tell what a lot of the monsters and visual motifs are supposed to represent. In Silent Hill 2, we can tell why James is seeing what he’s seeing. Murphy’s character is kept ambiguous, in part because his dark deeds change depending on how you play, and so all that symbolism gets lost. Other elements are too un-subtle. One sidequest involves our prison-bitch hero freeing caged birds. How painfully obvious. There’s also a new Pyramid Head analogy (drink up!), a huge dude in a rubber cowl and gas mask who wields a sledgehammer and who is Murphy’s Dark Side, just like he previously served as the Dark Side of James, Travis, and Alex. Dear people who make Silent Hill games, please retire that particular trope. And Murphy’s kind of hard to relate to, especially with his tiny eyes. Seriously, why are his eyes so tiny and close together? Was he a preemie or something? As in Homecoming, the ending you get depends on what you do at specific points (chug!), and it’s very easy to go good or bad. I got a good ending and it was a little too happy. Let’s just say that the protagonists behave in a manner that totally contradicts their previous relationship. As for the supporting characters, they’re mostly there to act tormented and then be quickly killed by their own guilt, as if we were reading the Cliff’s Notes for the plot of Silent Hill 2 (drink!). The exception is a magical black mailman who acts all cryptic and spooky, I guess because these games are no longer safe from Hollywood racial cliches. 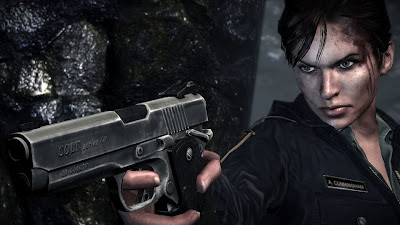 One final note: Downpour needed way more troubleshooting. The frame rate is terrible; the game jumps and stutters like mad, especially when you rotate the camera. There’s a few noteworthy glitches, the worst of which occurs in the subway, which Murphy can gradually unlock by doing favors for a hobo. It’s supposed to act as a shortcut, but some of it remained locked even after I’d completed the sidequests, thereby requiring me to wear out Murphy’s shoes as I trudged back and forth across the town. I looked online, and many other people have experienced this glitch. Way to go, Vatra Games. Maybe there’s a reason you only have two titles out.

Downpour didn’t get great reviews, but it gets a decent one from me. It takes a serious swing at recapturing the old vibe, and while it often whiffs, it succeeds hugely in looking awesome, playing pretty well, forcing you to explore and search, and rewarding longtime fans of the series (one tribute to Silent Hill 4 had me giggling with glee). This game could’ve been better, but I had a lot of fun playing it and it gives me some hope that the series will keep entertaining me. Although I’m filled with horror and disgust at the next entry, Book of Memories, which is...I choke on bile even as I type it...an isometric beat-em-up with co-op multiplayer. So, yeah, say goodbye to isolation, claustrophobia, subtlety, dread, and everything that makes Silent Hill good. What’s the best way to suck all the horror out of a horror game? Make it so that you and three buddies can beat the shit out of Pyramid Head! Seriously, I’m fucking pissed. I will not acknowledge Book of Memories as a real Silent Hill game, and I hope it bombs. But I assume that one day, more actual entries will appear, and I’ll be all over them. And there’s a new movie coming out, too! So I may return to this review series. For now, it’s been fun taking you on a tour of my favorite shitty vacation spot. Now...how do we get out? I could’ve sworn this road was open, but now it’s in ruins. Weird. And why is it getting dark so early? And did you just hear something nearby? 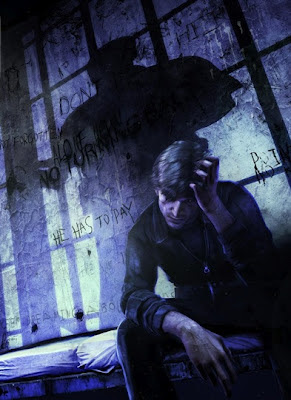