Who can say what fuels the human psyche? We may uphold certain standards when it comes to our entertainment, but beating deep within our hearts is.......eh, fuck it, I don’t wanna do a convoluted intro. Guilty pleasures. We all have them, we can’t say why, and these are mine. This isn’t a list of films because I actually have a defense for most of the films I like that other people hate, and I want to make a separate Top 10 out of them in the future. These are the things that I feel legitimately guilty about enjoying, even if it’s just a little smidgen of remorse. Ridicule is encouraged! 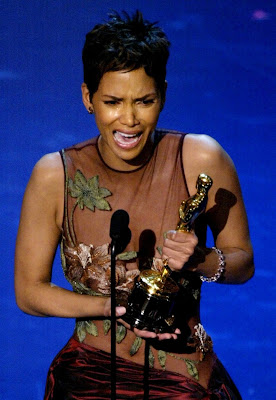 The Academy Awards
The Oscars are, of course, the ultimate celebrity wankfest, when all the golden boys and girls of Hollywood can pat each other on the prostate for doing what they do, and the rest of us can watch and seethe with envy. The ceremony is always the same, pretty much, and I’ve honestly gotten more and more fed up with its utter lack of surprise wins. I think if the bajillion awards ceremonies that precede the Oscars were tossed off a cliff, things would get a bit more interesting again. Maybe. I just can’t help enjoying all the pomp and pompousness. And I always cross my fingers for an upset (like Adrien Brody) or a crazy-ass unscripted moment (like Adrien Brody delivering half his acceptance speech to Halle Berry’s tonsils) or even a fat, stinky drama bomb (like Crash beating Brokeback Mountain because it was a “safer” choice). Yes, there’s always that slim chance of another Michael Moore meltdown or another Björk-level dress fail. And I pray for it. Shallow bastard that I am.
Guilt Factor: 7 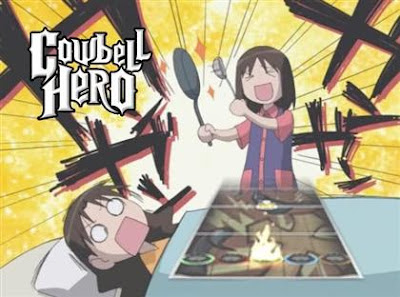 AMV Hell
You probably don’t know what this is, and I feel wretched just explaining it. AMV stands for Anime Music Video; basically, people take clips from one or more anime shows, edit them together with some popular song, and voila! A quick-and-dirty fan tribute. Most AMVs are obnoxiously earnest, but the AMV Hell series sends up the whole concept by being deliberately funny and sarcastic. I’m ashamed of liking it for two reasons. One, the humor in AMV Hell is often painfully obvious. (Example: Jigglypuff from Pokémon together with “Gettin’ Jiggy With It.” Wonder how long it took to think of that comic gem.) And two, I’m not even an anime fan. Seriously. I don’t even get half the jokes in AMV Hell, but I’ll still watch the bleeping things over and over. It’s not sophisticated. It’s often weak even by parody standards. But I can’t help myself. And if you even vaguely grasp why the above picture is supposed to be funny, you may be in the same boat.
Guilt Factor: 5 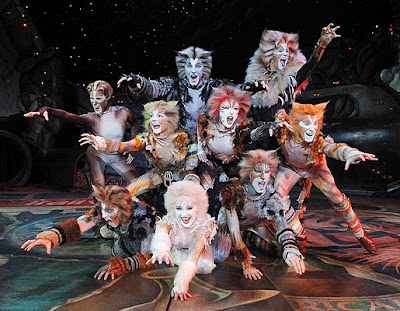 Cats
I refuse to feel guilty for liking Broadway musicals; most people do on some level, even if they won’t admit it. But Cats is....Cats is, um....wow. I mean, just listen to the pitch: dancers in harlequin spandex and fright wigs prance and mince around like nincompoops to overblown synth-heavy music while singing lyrics from, of all things, a quaint little book of vaguely Victorian poems by T.S. Eliot. Cats may quite literally be the STUPIDEST THING EVER PUT ONSTAGE, and I include Spider-Man: Turn Off the Dark in that statement. God help me, I love Cats. I love the 80s-ness of it. I love how seriously it tries to take itself. I definitely love the [supergay]lithe male dancers in skintight costumes[/supergay]. And I hate that toad-faced douche, Andrew Lloyd Webber, for being pretentious enough to think this was a good idea for a musical. Because he was right, and I’m part of the reason this nonsense became the longest-running musical ever. Please make fun of me. PLEASE.
Guilt Factor: 10 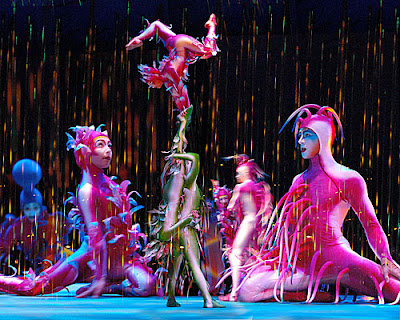 Cirque du Soleil
Speaking of spandex, speaking of ridiculous spectacle, say helloooooo to Quebec’s strangest import! I’m a circus nerd -- just spent a couple months working for one -- but Cirque du Soleil is like circus in the same way that a flaming, ten-foot pile of sugar is like a cookie. It’s weird, it’s kooky, its attempts at being symbolic are usually laughable, and Patton Oswalt summed it up best: “Everything in Cirque du Soleil is wet and French and gay and on fire at the same time.” That said, I faithfully chart its progress (though I’ve only seen it live a couple times) and tend to snap up its soundtracks and show DVDs, giggling all the while. After all, it is a legitimately amazing display of circus skill and theatrical bombast. It’s just fun! What’s wrong with that? Eh, a lot of things, but I know I’m not alone on this one.
Guilt Factor: 3 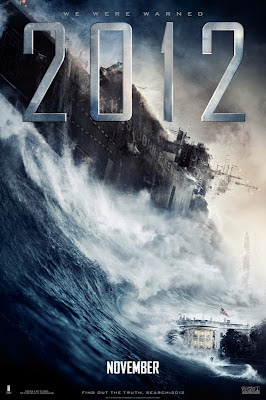 The Disaster Genre
Look at this poster! An aircraft carrier is falling on the White House. All logic and plausibility aside, isn’t that the most metal thing you can think of? Look, there has to be SOME reason for the existence of disaster movies. From classics like The Towering Inferno to the cheesebrained, pixelated spectacles of the Roland Emmerich era, films about big, bad things happening to shrieking little people tap into some sort of schadenfreude on our part, a need to point and laugh at misfortune so huge it is literally earth-moving. Or maybe we like to sigh with relief and say, “Well, my life could be worse; at least North America isn’t covered in magma right now.” Or we have a twisted need to validate our most irrational fears: “Luxury cruise ships can flip upside-down! I KNEW it!” Whatever the reason, we spend money on this bullshit even as we look guiltily at the next theater where Kate Winslet is earning another Oscar nom. Or I do. Maybe the rest of you are less dorky.
Guilt Factor: 5 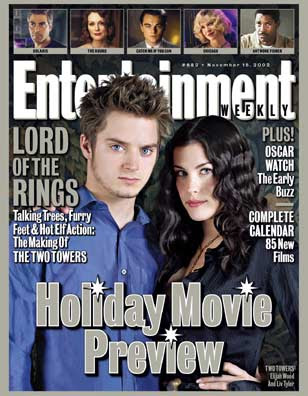 Entertainment Weekly
“So, Dang-Blasted,” asks no one at all, “where do you get the inside information that enables you to so effectively analyze pop culture?” I’m glad you asked! Beat me with a shovel and roll me in the poison ivy because I am utterly devoted to Entertainment Weekly; I subscribe to the magazine (who the hell still does that?) and visit the website several times a day. Oh, look, Betty White and zoo animals! Yeah, it’s true, I have a problem. EW is a solid source of pop culture news and tidbits, but I probably depend upon it a little too much. I like to think it’s more intelligent than a lot of other media periodicals, and a lot of the site bloggers do approach their jobs with a wonderful tongue-in-cheek attitude. But it’s still pathetic when I check my mailbox so frantically on Saturday. Or when I scream, “DAMMIT, I wanted the edition of the Walking Dead issue with Danai Gurira on the cover!” as I did not too long ago. Now you know how my mind works; I won’t be angry if you’re scared away.
Guilt Factor: 7 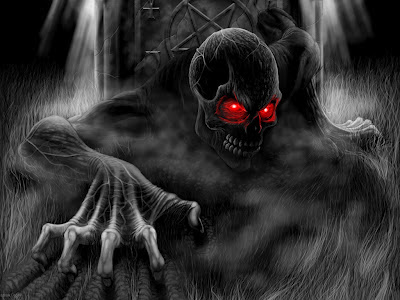 Horror
Genre work gets a bad rap. It’s hard to be taken seriously in the upper echelons if your book, film, or TV show contains elves or aliens or whatever. Things are getting slowly better for sci-fi and fantasy, but the horror genre continues to languish. Everyone knows it’s just for maladjusted teenage boys in black trench coats, right? Me, I love scary stuff; you may have noticed my recent long-winded ode to a certain video game series. It’s fun to be scared, what can I say? The challenge is trying to defend horror as something highbrow, something you’d want to read or watch or play for reasons beyond dumb titillation. It’s maddening that people call Stephen King a no-talent hack, yet when Joyce Carol Oates writes what is clearly a horror story, they label it “Gothic literature” and praise it. It’s frustrating that I have to feel ashamed of my love for horror. I hope things change. In the meantime, I’m gonna dive into some Lovecraft or play some Resident Evil. Who needs sleep?
Guilt Factor: 4 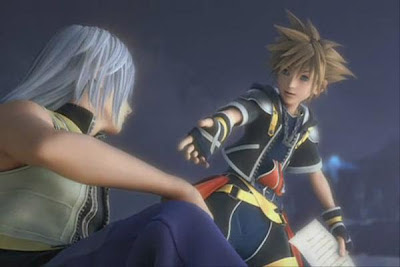 Kingdom Hearts
The Kingdom Hearts franchise is a perfect example of what happens when the wrong people get their hands on beloved geek property. I’m guessing the folks at Disney and Squaresoft had dollar signs cramming their eye sockets, or else they might have really looked at their Frankenstein baby and wondered who the hell it was made for. Donald and Goofy fight Sephiroth? Mickey Mouse vs. long-haired anime girly-men in trench coats? WTF? This bizarre mashup of the Disneyverse and Final Fantasy seems custom-made to appeal to neither fanbase, so why is it so successful? Well, it doesn’t help that folks like me play it for the sheer guilty lulz. It is over-the-top ludicrous yet takes itself so seriously that you want to give it a condescending doggie biscuit. The gameplay itself is little more than button mashing, the plot is constructed out of scattered Scrabble tiles, and the peripheral shit (coliseum battles, StarFox-style spaceship shenanigans, and that fucking Little Mermaid musical) is beyond pointless. I’m sorry I play and enjoy these dumb games, okay? But don’t try to tell me you didn’t love summoning Tinkerbell!
Guilt Factor: 8 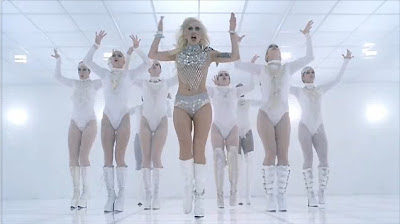 Lady Gaga Music Videos
I’m not going to get into Lady Gaga’s perceived talent, or lack thereof. Her music is no better or worse than any other pop act, okay? But no one can deny that the former Ms. Germanotta is one of the Grande Dames of Spectacle, and it shows most in her music videos, which I’m ashamed to say I adore. I just can’t get enough of how balls-to-the-wall weird they are -- less like music videos than like experimental short films with an excess amount of booty. Each takes place in a sparkly, neon universe where Gaga controls the laws of physics, and each is like a different drug. Shall we be imbibing the ghoulish voyeur’s paradise of Paparazzi today? The sci-fi pomposity of Born This Way? The fascist fetish playground of Alejandro? The Tarantino wet dream of Telephone? How many costume changes, high-cheekboned backup dancers, geeky movie references, paste-on diamonds, or dead supermodels are enough? When will the pansexual hanky-panky end? Hopefully never, because watching Gaga’s whack-job showwomanship gives me an endorphin rush. I think maybe I was born this way.
Guilt Factor: 5 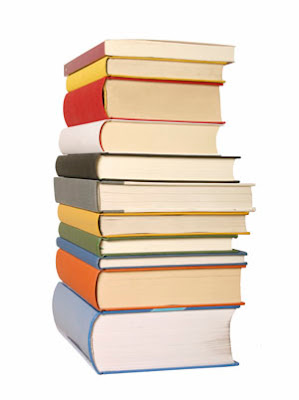 Really, Really, Really Huge Novels
The problem with doing this in alphabetical order is that I can’t end on anything REALLY shameful. I’m honestly more proud than chagrined to admit that I get off on reading books the size of cinderblocks; in the age of e-readers, some of us have to stay old-school! I was totally one of those kids who shuffled around with a thick hardcover gouging divots in my armpit -- all the time, too, and not just when the new Harry Potter came out. I go through normal-size books like mad, but sometimes it’s nice to slow down with a tome that’ll take a loooooong time to read and digest. Like David Foster Wallace’s Infinite Jest, or Neal Stephenson’s Baroque Cycle, or Game of Thrones, which I’m still gearing myself up for. It’s like a badge of pride: yeah, I’m bookish enough to make it through one of these! Yeah, I find daunting literature more fulfilling than fucking iPhone apps! And yeah, I’m in a shrinking minority, but that just makes me more determined.

Looking back over this list, I realize that it’s very personal...but that’s the thing about guilty pleasures. They help define us, for better or for worse. So never be ashamed!
Guilt Factor: Fuck You, I’m Proud
Posted by Dang-Blasted at 8:32 AM