Silent Hill 2 -- In My Restless Dreams, I Adore This Game

Here’s one awesome thing that games have over films: with games, it’s more common for the sequel to top the original. After all, the first game in a series is kind of the prototype, the shot in the dark. Can this work? Okay, what didn’t work? Let’s fix it! Whereas movie sequels’ attempts to “outdo” their predecessor often fall horribly flat. (This may be changing; note the Harry Potter series, Christopher Nolan’s Batman films, Toy Story 3, etc. On the other hand, Cars 2.) Some of my favorite video games ever are sequels: Resident Evil 4, Sly Cooper 2, Riven....and, holy fucking shit on toast, Silent Hill 2.

If there was ever a perfect case of learning from the original, it’d be Silent Hill 2. It’s barely even a sequel, really; it tells a self-contained story and references the first game only fleetingly. The boys at Konami took the bold step of moving sideways instead of forward, asking the big question of how exactly the haunted town of Silent Hill preys upon the mind. Suddenly, the town isn’t merely a physical site where bad things have happened, but a mental site as well, a true dreamscape. It’s a place where the tortured and damned are drawn, somehow -- perhaps because evil calls out to evil, or because we can only find redemption by facing down our own demons. Call it an extremely painful and traumatizing health spa for the soul. Isn’t that more interesting than some nonsense about a religious cult? 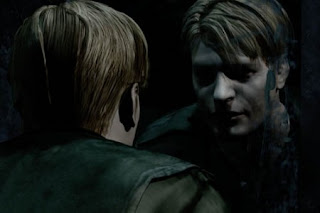 Silent Hill 2 is not about killing monsters. It’s about one man’s private journey straight into the depths of hell. That man is James Sunderland, who has been half-catatonic since his wife, Mary, died from disease. Impossibly, he gets a letter from Mary, inviting him to Silent Hill, where they vacationed in happier times. Torn between disbelief and pitiful hope, James drives to Silent Hill and heads in on foot when the road is blocked. What he finds is the corpse of a town, slowly rotting away with no one to see. The roads have collapsed. The storefronts yawn vacantly. The mist never lifts. There are monsters in the mist, but they seem more pitiable than dangerous. James begins his search, and the town of Silent Hill begins to work on him....and on the player.

What I admire about this game is that it’s so quiet. So understated. Yes, there are loud and violent moments, but for the most part, James is locked in stillness and solitude. In such an environment, you dread the horror even more. You jump at every noise, and boy, does this game know how to make use of scary sounds and music. The predominant flavor of fear on display in Silent Hill 2 is not shock or panic, but dread. Cold, creeping dread. The certainty that nothing is right or normal. This is generated not only by the sound design and the sense of isolation, but also by the careful doling out of horrific images. They scare at first glance, then get under your skin on a subliminal level. Example: at one point, James revisits a room he already searched, and finds that a bloody corpse is now seated in a chair, facing a TV which is showing static. Someone put the corpse there. Recently. Every time James enters this room, chilling music plays. Nothing else happens and I know nothing else will happen, but even after multiple playthroughs, I still dread going into that room. Oh, and you can’t really see it, but the corpse looks exactly like James. 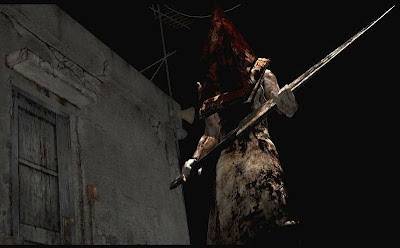 Silent Hill 2 is entirely the story of James. As you play the game for the first time, you realize that what you’re experiencing is far more than generic frights; it’s a nightmare that is custom-tailored. The town has somehow reached into James’s mind. It has become James’s mind. He mourns his wife, yet resents her for dying -- thus, the monsters are mostly female in appearance, and James encounters a woman who looks like his wife, but is sexier, needier, more slavish to him. Everything he hates about himself is paraded before his eyes. Pyramid Head makes his debut in this game, and while it’s easy to joke about the infamous scene where he rapes a lady-monster, it doesn’t make him any less terrifying. There are moments in the game where you encounter Pyramid Head with no warning or fanfare; he’s just THERE, stalking James in the dark. Only, in a fucked-up way, he kind of is James. And only James; despite what future Silent Hill games would have you think, Pyramid Head only belongs in the psyche of James Sunderland. What I love is that we get flashes of other nightmares; James meets two other tortured people, Angela and Eddie, who are both dangerous in their own way, and who are almost certainly seeing something completely different than James. And there is a little girl, Laura, whose innocence protects her from the nightmare -- although she, too, has a danger about her. One of the game’s most horrifying sequences comes when Laura locks James in a room with.....eh, I won’t spoil it. It’d make anyone shit their pants. 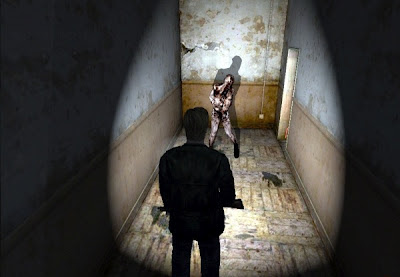 Does the game have any flaws at all? Well, yeah. There are only three types of monsters that appear regularly, and fighting them is very repetitive, especially in the claustrophobic indoor sections where running isn’t an option. The puzzles and item hunts are arbitrary, but then, it wouldn’t be a survival horror game without utterly nonsensical puzzle logic -- right, Resident Evil? The graphics probably aren’t the best, but in a game like this, that actually works. Everything is murky and unclean-looking; sometimes the whole town seems like a diseased organ. The voice acting is a tad weak, the combat is still lousy....and you know what? Fuck all this nitpicking. The more you play Silent Hill 2, the more trivial these things seem. The game just gets better and scarier as it goes, and it culminates in a couple really devastating plot twists and the possibility of several endings, some of which just fucking ruin you, emotionally. A lot is left unexplained, but in a way that cries out for juicy theorizing. In pure storytelling terms, Silent Hill 2 can’t be beat; the scene near the end, with the fire and the staircase, took my breath away. Those who played the game should know what I’m talking about.

Okay, time to come up for air after fellating this game for several paragraphs. The bottom line is, Silent Hill 2 represents everything that’s good about the Silent Hill series and almost nothing that’s bad. While it isn’t a perfect game, it is without a doubt the scariest game I’ve ever played, and one of the best overall. It took the concept of the haunted tourist town to giddy heights. I’m far from the only one who adores Silent Hill 2, and my big regret is that the series peaked this early. Silent Hill 2 was so awesome that it couldn’t really be topped. Konami and various Western developers have been trying ever since to make lighting strike twice. But it won’t. 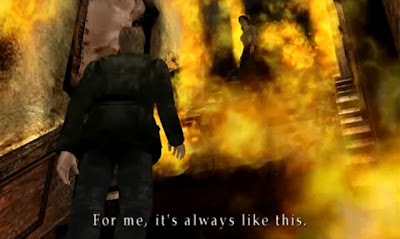