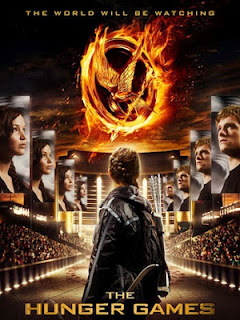 Surely you didn’t think I wasn’t gonna review The Hunger Games after all that casting ballyhoo I posted last year. I’ve been rabidly awaiting this film for a long time, and now that it’s out and all the hubbub has died down, I can offer my own humble take. First and foremost, I’m so happy that it’s been a box office smash, leaving Twilight in the dust and ensuring that the sequels will get made. I’m also really happy that people like it, that the fans are largely pleased and the newbies are mostly engaged. Heh, was there any way this could have been a negative review? Probably not.

I’m not gonna spend a lot of time comparing the book to the film, though I’ll probably make a few points. I’d rather look at Hunger Games in terms of its own merits, which are considerable. I love, love, love the stripped-down take on the story; it’s actually what I was hoping the adaptation would do, before I even knew anything about it. Suzanne Collins’ novel is a very fantastical sci-fi tale, with descriptions of the high-tech Capitol and the enclosed microcosm of the Games that border on magic. Gary Ross’s film strips away a lot of the excessive (and sometimes kooky) future tech and focuses instead on the idea of a messed-up, rotting civilization where all the wealth is in the hands of those who don’t know what to do with it. The Districts are trapped in the past; in District 12, where heroine Katniss Everdeen hails from, it could still be the late 19th century. By contrast, the Capitol is awash in gaudy retro chic, pinks and turquoises, fashions and architecture that invoke ancient Rome, Elizabethan dandies, 1950s gentry, and others. Not only does this look cool, but it reinforces the notion that the Capitol is stuck in a mental rut, copypasting ideas and stagnating. The most high-tech stuff we see is in the Hunger Games control room, where white-clad techs manipulate events via floating holographic touchscreens. In other words, they could fix things, they do have the technology, but it’s all wasted on useless bullshit and bloodsport. Touché.

Into this decayed future world are tossed great characters played by skilled actors. Based on this film alone, I’d say Jennifer Lawrence is absolutely a movie star. It’s tricky to play someone as prickly, introverted, and closed-in as Katniss without coming across as an unlikable sourpuss. Lawrence does tons of acting with her eyes, making Katniss’s long silences into a mantra of inner turmoil. When she does burst out in strong emotion, getting angry at Peeta or mourning Rue’s death, it’s like a dam has broken. The supporting cast do a fine job -- I especially loved Lenny Kravitz’s quiet grace -- but Lawrence holds the whole movie, solid as a rock. Bravo. Also, the film was more expansive than the book (which is narrated by Katniss in present tense), so we get more insight into these folks. We see the reactions of characters outside the Games, the two media personalities (Stanley Tucci and Toby Jones) provide handy commentary and exposition, and we get way more of gamemaker Seneca Crane (Wes Bentley, upstaged by his now legendary beard) and President Snow (Donald Sutherland, portraying the kind of evil despot who convinces you he’s reasonable). No complaints here! It fleshes out the story and provides groundwork for the sequels. 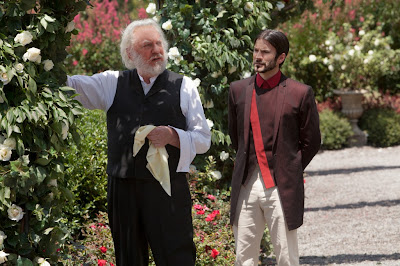 The Hunger Games is very long but goes by in a flash. So different are the film’s two halves that it’s like we’re watching a double feature -- first a documentary about a theoretical dystopia, then a frenetic action flick. I did really appreciate the long journey toward the Games -- the Reaping, the trip to the Capitol, the prepping and training and media appearances. I’ve seen what happens when a screen adaptation tries to condense the book’s first act; I’m thinking specifically of Harry Potter and the Goblet of Fire, which crammed the entire Quidditch World Cup into fifteen lackluster minutes. The leisurely pace of the early Hunger Games scenes are just right, though they do clash with the action-oriented second half, which isn’t as compelling. Yeah, it’s exciting, but it’s mostly running and fighting and hiding and the like, and my interest occasionally wavered. A lot of character building gets jettisoned and important sequences like Katniss’s alliance with Rue or her gradual bond with Peeta are reduced to quick episodes, done and checked off. People have complained about the relative lack of bloodshed, and I agree, it lessens the horror of what these kids are being forced to do -- although the jagged editing and near-subliminal gore do give the fight scenes a kind of nightmare logic, especially during the desperate, eerily hushed Cornucopia massacre that kicks off the Games. And, yeah, they could have toned down the shaky-cam. Sometimes it worked, and sometimes it was like we were watching a particularly off-topic Blair Witch sequel. 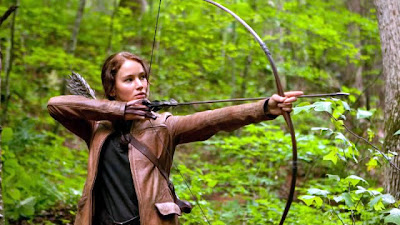 I guess that’s it for quibbles. I really liked this movie and my high expectations were pretty much met. As always, it can’t quite live up to the book, but what it does do is make the story about as plausible as it could be, thanks to the aforementioned stripped-down aesthetic and the incredibly grounded, haunted performance from Jennifer Lawrence. And it effectively shows us this awful vision of a future America where decency and progress have taken a backseat to mindless passivity, nihilism, and recycling of thought. The placid reactions of the Capitol citizens, the hollow faces of the half-starved District 12 laborers, the blank eyes of butchered children -- the sheer idea that the Hunger Games could make any sense at all -- it’s all there. As my philosophic best friend (who knew nothing about the story beforehand) asked, how could this society even function? Why wouldn’t everyone rise up in fury and stop this? Well, the point is that they must, and they will. In the sequels. Which I wish were already out, goddammit.

PS: I’d like to apologize to Jackie Emerson, who I earlier dismissed as not looking right for the role of Foxface. In the film, she looked exactly right, and there was one moment, where she and Katniss stared at each other like terrified prey animals, that sent a shiver down my spine. Kids are murdering each other in the name of so-called social order. Strip away the spectacle of a blockbuster movie and just think about that. 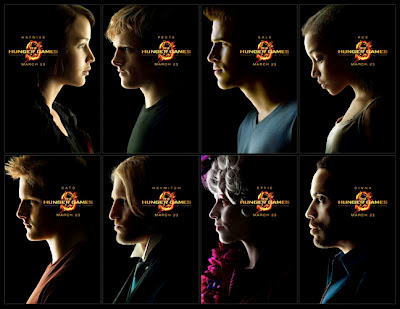