DANGER: THIS IS ANOTHER REVIEW OF A PORT. O, REMORSE!

I just got done replaying the dreamlike little game that is Silent Hill: Shattered Memories. Once again, it cast a spell on me. Hard to believe that it was made by Climax Studios, the same folks responsible for the unintentionally hilarious scavenger hunt that was Silent Hill: Origins. While Origins was content to tread water in the shallows of the Silent Hill kiddie pool, Shattered Memories dives off the deep end into a place none of the games have gone before. I can’t even call it a sequel or prequel. It’s a re-imagining, one of the few that can seriously call itself that. Usually, in movie/TV/game terms, “re-imagining” just means “remake, but shittier.” Not in this case. Shattered Memories stands alone. And I really, really like it.

I get sick of typing the name, so let’s just call it Memories. It was made for the Wii, presumably in an attempt to bring the franchise to a wider audience. I’ve only played the PS2 port, which is honestly pretty crappy -- but doesn’t distract from the game’s considerable strengths. At first glance, it does seem like a straightforward remake. Again, you are Harry Mason, writer and single dad to young Cheryl. Again, there is a car crash and Harry must hunt for his girl through empty streets and claustrophobic rooms, flashlight in hand. Some of the characters from the first game also reappear, more or less. And there are still deadly monsters and mind-warping reality shifts. But everything else is new, and even the familiar staples of Silent Hill are utilized in dramatically different ways. You may have noticed a pattern in this series: either the gameplay is good but the story is weak, or the story is strong but the gameplay is lacking. Memories features extremely simplistic gameplay (it is the Wii, after all) and I can’t defend it on a technical level....but the story. My God, the story. 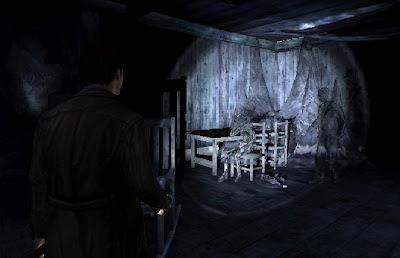 It’s winter. Silent Hill is held in the grip of a tremendous blizzard that has blocked most of the roads and driven the town’s inhabitants indoors. And, yes, there are actual inhabitants. This is not a ruined, devastated town where terrible events have taken place. This version of Silent Hill is normal. Peaceful. Serene. The nightmare is taking place entirely within the personal bubble of Harry Mason, and more than ever, we have the sense that it’s all in his head. The crash has left him with, yes, shattered memories. He thinks he knows where his home is, but is mistaken. He thinks he knows who his daughter is, but soon discovers things that directly contradict his notion of reality. He meets a girl who claims to be his lover, then meets an older version of her who claims to be his wife. And everywhere he goes, the nightmare follows. At any time, without warning, the world may freeze over and shift into an ice-choked Otherworld inhabited by shrieking, faceless creatures who chase Harry relentlessly. All he can do is look for an exit, and even if he finds it, who knows what “reality” he may be returning to?

Shattered Memories has a big, fat, honking gimmick that it trumpets from the rooftops: it psychologically profiles you. At the beginning, you’re in the office of a smug shrink named Dr. Kauffman (last seen as a drug-dealing creep in Silent Hill 1 and Origins) who’s determined to dig into your head. During gameplay, you return to Kauffman’s office several times to answer questions and perform little activities designed to determine your personality. And the game changes depending on what you do. The changes mostly have to do with the characters’ appearance and behavior. For instance, Cybil the friendly police officer can appear as a plain motherly type, a militaristic hardass, or a fetishized sexpot. Harry himself has a different demeanor depending on how you play him. This is intended to make the game scarier, and it doesn’t. It makes the game more interesting, to be sure, and adds some solid replay value. The first time I played it, Harry was like me: a bit shy, but possessing a wry sense of humor and the ability to be a gentleman. The second time, I made different choices and Harry became a less likable, easily-angered former jock. Unfortunately, this just goes to show how arbitrary the “profiling” gimmick is. It only works if you play along, and the changes in gameplay aren’t drastic enough to truly fuck with your head. Sometimes, you must choose one of two paths: do you go through the art studio or the planetarium? But the first time I played, I kept missing the choice and going through the first door I saw. So what’s the game supposed to do with that data? 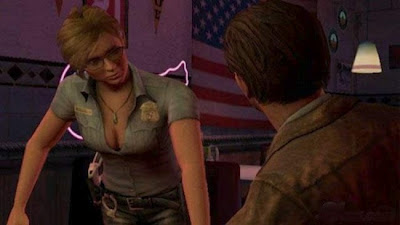 It’s not a scary game. It just isn’t. The only time you’re in any danger is when you’re in the Otherworld. Those sessions are certainly exciting -- Harry can’t fight, only run and evade the doll-like monsters. You’re tossed into a frozen labyrinth, and although the doors and pathways are well-lit, it’s easy to find yourself going in circles. You can hide, or throw down obstacles, or grab a precious signal flare to keep the beasties at bay, but if they overwhelm you, it’s back to the start. I kind of enjoy this part of the game; it gets your pulse racing. But it is just...not...scary. Honestly, the monsters are more of a nuisance, distracting you from the cool set pieces of the Otherworld, which look like a Roland Emmerich movie where M.C. Escher was the production designer. But wouldn’t it have made more sense to have the psychological profiling affect the Otherworld -- actually change the environment and look of the monsters based on what it thinks you fear? It’s a missed opportunity and it cripples the game’s attempt at scariness.

And yet, I love Memories, and it’s because of the story and atmosphere. This game is shrouded in mystery. Harry’s isolation leads not to dread but to a deep sense of melancholy and loss. The people he meets are real people with real flaws, and they only serve to underline that he is cast adrift in his own mind. And the memories of others intrude on his. Harry has a cell phone with which he can take photos, make and receive calls, or check his map. And throughout the game, he finds...echoes. Flickering fragments of someone else’s memory that his phone will pick up and record. He’ll take a picture of a particular spot and hear a woman reciting her marriage vows, or a boy crying for help as his friend drowns. He will also find objects, keepsakes, that you can collect and store. None of this is necessary to the gameplay, but it all gets woven together into a wonderful tapestry of symbolism. In terms of interactive storytelling, Memories is incredible. It’s not about the gameplay, which amounts to a four-hour walking tour. It’s not about the puzzles, which are generally lame. (Oh, no, the door is locked! Where in the immediate vicinity is the key?) It’s about the fragmented narrative. We share Harry’s confusion as nothing around him makes sense. We hunt for answers along with him. 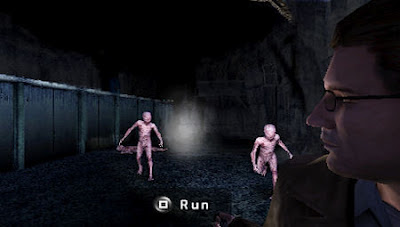 When I first played Memories, I initially thought it was dopey -- just a dumbed-down version of the original concept. But as I kept playing, I was utterly sucked in. It is a powerful game, not for its failed attempt at horror or its flawed gimmicks, but for the care that was given to Harry’s story. The dialogue and voice-acting are quite strong; each character comes to life. You care about them, worry for their safety -- and wonder if they’re even real. It’s a game that requires its players to be smart enough to read between the lines. A lot goes unsaid, just like in Silent Hill 2. But there is an explanation. The ending of Memories is perfect. There’s a big twist, and it’s pulled off so goddamn well. You finally understand what’s been going on, why Harry sees what he sees and does what he does. I won’t spoil it, but let’s just say that I’ve never been so blown away by the simple sight of a character walking into a room. Depending on the choices you’ve made, the game’s ending can be poignant, tragic, heartwarming, bitter, or all of the above. But it’s always powerful, even after multiple play-throughs. And, trust me, this is a game you want to play through more than once. It has a helluva lot to offer.

Shattered Memories is far from perfect, but I love it and it gives me hope. Someone was bold enough to try something completely different with the idea of Silent Hill, to shake off all the clichés of the franchise and go in an entirely different, thoughtful direction. I wouldn’t mind more paradigm shifts like this one! I guess we’ll see what the future holds. 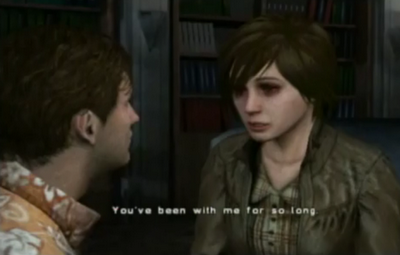