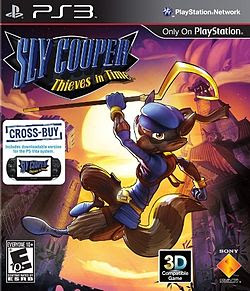 I feel like I’ve been waiting forever for a new Sly Cooper game. To give some historical perspective, this series blew me across the room once. I’d played the demo for Sly 2 and said “meh,” because the demo was put together by retards who hand-picked the least interesting parts of the game to showcase. When I finally tried out the full version, there was sunlight and roses and little angels with trumpets because it was AMAZING. And that was that. But there were only three games! The first, Sly Cooper and the Thievius Raccoonus, is fun but very short and a bit forgettable. It functions as a beta for Sly 2: Band of Thieves, which took the concept and blew it up into a delightful mishmash of stealth mechanics, sandbox environments, and awesomeness. Sly 3: Honor Among Thieves followed along dutifully and was solid but overstuffed, with too many playable characters and vehicles jostling for attention. After that, the developer, Sucker Punch, closed the curtain for the time being. Sucker Punch has yet to make a bad game; even their debut, an obscure N64 platformer called Rocket: Robot On Wheels, is put together well, and they’re now known for another great franchise, InFamous. But what of Sly?

Thieves In Time, the fourth entry in the series, was made by Sanzaru Games, who don’t have much under their belt but did port the original Sly trilogy for the PS3. I was really nervous about this, but it turns out to have been an advantage: they’re well acquainted with the mechanics but are humble enough to not fuck with the formula. This is astounding: apparently Sanzaru began developing Sly 4 WITHOUT PERMISSION, and when they showed off their work, Sony was sufficiently impressed by the quality (or the massive balls on display) to give the green light. Imagine if that story had had an unhappy ending. We wouldn’t be gifted with Thieves In Time, an extremely enjoyable and faithful-to-a-fault fourquel. Apart from a luscious graphical facelift, nothing much has changed. Playing through the game, I realize that I didn’t really need anything to change. 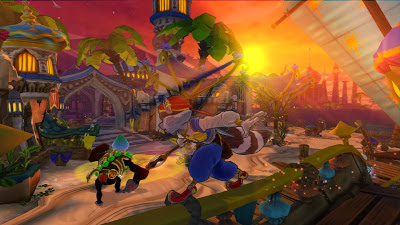 The Sly games take place in a cell-shaded world of talking animals that dances somewhere between high-tech present-day and Noir. Sly Cooper is a suave raccoon who’s also descended from a long line of infamous thieves. Fortunately for the hapless victims of the world, the Cooper family upholds a strict code of honor and only steals from total bastards. The plot of Sly 4 picks up where the last game left off: Sly’s been semi-retired for awhile, faking amnesia in order to be with his sexy girlfrenemy, Inspector Carmelita Fox. Then he discovers that someone appears to be altering history -- Cooper history in particular. So Sly leaps back into action along with his two ever-faithful sidekicks, Bentley the nerdy, wheelchair-bound turtle (who wants to find his missing girlfriend, Penelope), and Murray the musclebound hippo (who wants to punch everything in the world). They travel back in time (Carmelita gets yanked along, of course), and uncover a sinister plot spearheaded by a shady individual called Le Paradox and several other time-displaced evildoers. Along the way, Sly’s ancestors are dragged into the mix as well. Because that wouldn’t mess up history, oh no!

Controlling Sly revolves around stealth sneaking and context-sensitive acrobatics, with the circle button doing most of the work for you. You bound across rooftops, walk on wires, balance on the pointy tips of things, and pick the pockets of derpy guards. Each character plays differently, some better than others (I’ve never found Murray’s beat-em-ups very interesting). You get a chance to play as all the historical Coopers, each with their own skills, and Sly also picks up special costumes that allow him access to hidden areas and (for the first time in the series) provide a reason to revisit levels. The story missions are a nice selection of challenges and minigames. Action platforming, button-matching, arcade-style shooting, timed sprints, vehicle courses, boss battles, FPS shenanigans -- everything gets its moment. Or you can ignore the story and just explore the sprawling open levels. Collect all the clue bottles to recover an extra-special treat, or seek out treasures that you must spirit back to the hideout before the clock runs down. These sidequests (criminally absent from Sly 3) add tons to the playability. 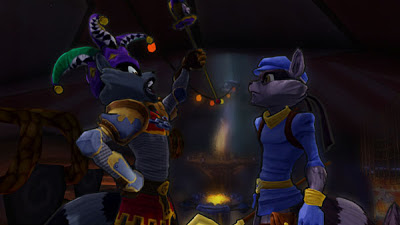 So I obviously like Thieves In Time. Does it redefine the series? Not at all, for better and for worse. Like I said, I didn’t need it to be different, but I also kinda felt like Sanzaru was carefully following a checklist. One thing I noticed was that the game is never very difficult, whereas the original trilogy could ramp up the challenge quite a bit at times. There was also less variety in the missions: I got sick of having to tail the baddie-of-the-moment while they conveniently outlined the details of their evil plan out loud to themselves. Fortunately, most of the villains are funny and interesting. Most but not all. Main antagonist Le Paradox is barely present (the earlier entries had this problem too) and his eventual appearance, as well as the not-really-a-final-boss-fight, are anticlimactic. The levels are fantastic, each one a visually-striking playground of high vantage points, disorienting pathways, and hidden crannies. (The only level that flops is the Ice Age; it seemed like the developers got really excited about the concept and then, too late, realized they had no good material to fill it. Also, the Ice Age villain, a jive-talking bear in a pimp suit, should be stoned to death for racism.) It’s understood that the Sly franchise depends upon a certain formula. Better to recreate the best aspects and be satisfied, though I still feel they could’ve taken things a little farther.

There is one thing they took farther, for which I am incredibly grateful, and that’s the character of Carmelita Fox. Up until now, she was a ball and chain that dragged the series down. See, Carmelita is basically Javert from Les Misérables with furry boobs and a taser gun; she hates all lawbreakers and believes in an entirely black-and-white world. Every scene where she totters impotently after Sly while yelling, “I’m gonna GET you!” is a scene that lessens the game. Ironically, she was worst in the best entry, Sly 2, which presented Carmelita as a shrill, clueless fuckup who, at one point, failed to realize she was dancing with her arch-nemesis, even though his brilliant disguise strategy was to wear a tuxedo and NOT TAKE OFF HIS THIEF MASK. Anyway, yeah, I have issues with Carmelita. To my happy surprise, Thieves In Time makes her into...a person! Holy shit! She’s forced to rethink her own philosophy; after all, she’s been cozy and romantic with Sly for awhile. She knows him now (also in the biblical sense, bow chicka bow wow). And she finally takes the time to see that his criminal acts serve a larger good. So she’s conflicted. She doesn’t know where she’s gonna stand once everything is over. I found myself warming to Carmelita in a way I never had before, so kudos!

On the flip side of character development, I do have a huge, angry nitpick. Without spoiling too much...at one point in the game, a character who we thought was good turns out to be evil. Shocking twist! Yeah, but shocking in a shitty way. I kept waiting for the character in question to turn out to have been brainwashed or something. Nope -- they’ve been secretly evil all along. Not only does this reveal come out of nowhere, it is completely untrue to the character in question. Up until this point, NOTHING about them has implied that they A) are a power-hungry megalomaniac, and B) have been planning to backstab Sly and co. from the get-go. It is a cheap, false twist. And it’s not properly resolved, either: there’s a rushed, obligatory emotional crisis; the revealed villain is beaten to a pulp; and our heroes stroll away, dusting off their palms. “Yeah, good thing we deal with painful betrayals of friendship on a daily basis!” The whole sequence made me facepalm. Maybe the next game will take the hint and repair that whole misguided subplot before it’s too late.

I said “the next game” even though I’m not sure there will be one, because I insist on optimism. Despite erring a little too much on the side of caution, despite befouling one good character, the folks at Sanzaru did such a bang-up job with Sly’s world that I can’t imagine them not being invited to continue. Of course, it depends on the success of Thieves In Time. Will it introduce new players to the franchise? Will it be dismissed as obsolete? Or will they be able to follow the example of Halo and bless the world with an entire second trilogy? Fingers crossed, because Sly Cooper presides over a way cooler, more engaging gameworld than fucking Master Chief. In my teeny little opinion, anyway.