To Squee Or Not to Squee: Pacific Rim 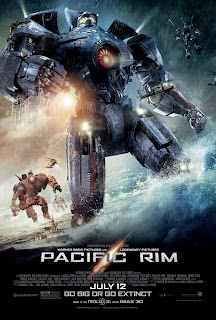 Some directors get away with a great deal because we love them. Their movies rarely fail to entertain, so we allow them to indulge their specific stylistic flourishes even when they become punchlines. Hey, they’ve earned the right to stick an “-esque” at the end of their names, yeah? That’s why I don’t mind Jean-Pierre Jeunet’s windup-toy whimsy, Tarantino’s smug fanboy plagiarism, or whatever the hell psychotropic drug Tarsem Singh is feeding his production designers. And Guillermo del Toro? He could make a PSA about slippery linoleum and I’d still pay to watch it. So when he decides to make a summer blockbuster in which giant monsters called Kaiju (Japanese for “Pikachu”) get into deafening punching matches with equally giant robots called Jaegers (German for “beer”), I’m nervous. What about del Toro’s baroque sensibilities? Where will there be room for gold filigree and organs in vats and goblins with bicycle wheels fused to their armpits and the other stuff he usually incorporates? They’re what make him an awesome director, not his box office numbers!

I’ve seen Pacific Rim and it’s all good. He needed to get this one out of his system and I can dig it. This film is DUMB, but not Transformers dumb. Transformers dumb comes with a side order of vicious cynicism: “We know perfectly well that you’re gonna spend money on this turd and buy Mountain Dew just because Bumblebee’s on the can, so let’s not pretend anyone cares about the actual movie here. Present your anuses for sodomizing now.” Pacific Rim is a seven-year-old boy who drank five things of Crush for lunch and is flailing around on his bedroom floor with all his toys, going “POW!!!! SPLAT!!!! NEEEEEYYYYOOOWWW YOU’RE DEAD!!! I SAVED THE WHOLE WORLD!” Having an enviable degree of fun. The boy grew up to be Guillermo del Toro in this case, and someone gave him enough money to make a movie where characters are named things like “Stacker Pentecost” and talk about dimensional rifts and telepathic linkage with a straight face. Where everything is huge and loud, but in a kinda joyous way, even when the future looks bleak. Believe me, del Toro knows what movie he’s making. Me and my friends couldn’t stop giggling. He knows when to milk a shot or angle for shamelessly cheesy badassery, when to turn up the Dubstep. He knows his characters are total cutouts and that we’ll guess who’s gonna live and who’s gonna die three minutes in. So?

Nothing in Pacific Rim makes much sense. Monsters from a dimensional rift start fucking up our cities, we build huge robots to strike back, they evolve in turn, and it becomes a Freudian contest of who can out-phallic-symbol the other. The film’s also suffering from what I like to call Snow White Syndrome. If you think about it, the original Snow White story features the world’s dumbest princess versus the world’s most incompetent evil enchantress, and the winner is whoever fails the least. Same thing here. Out of all the weapons to fight the Kaiju with, why would we design humanoid robots? Bipedal things fall over easily, hello! And why rely on two pilots who are telepathically linked, so one nasty flashback or killer hangover can ruin everything? On the other hand, why are the bad guy monsters taking forever to assault us, sending one foe at a time, giving us endless opportunity to retaliate? Are they taking tips from the dumbfuck aliens in Independence Day? And why do both the Kaiju and the Jaegers have an arsenal of powers, weapons, and attacks, but only remember to use each one exactly once? When a beastie gives off an EMP that shuts down not only the Jaegers but also the good guys’ HQ, our heroes would be in huge trouble if ANY of the subsequent Kaiju EVER did that again. The stupidity knows no bounds. But...so? 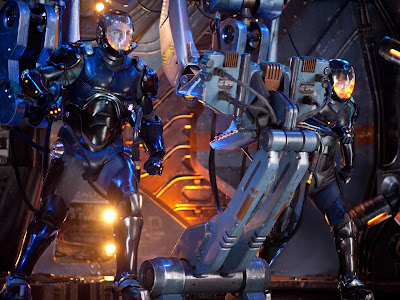 So...this movie is a juicy mound of silly fun. Del Toro had fun making it. Why can’t we have fun watching it? He keeps his playful touches even in the midst of generic action. The movie is bursting with neon colors (the Kaiju look like they’re off to the rave) and a fetishistic level of detail. The actors are fetishized too: Charlie Hunnam (as the haunted hero) squares his all-American jaw from within his sexy robo-armor, Idris Elba (as the hardass yet empathic commander) soaks the screen in daddy-figure charisma, and when Ron Perlman shows up...well, I won’t spoil that one because everyone should have the chance to lose their shit. I do pity poor Rinko Kikuchi, the token woman, stuck with a goo-goo-eyed, virginal Little Sister role who can’t operate without the penis-sporting guardians in her life. Oh, and Charlie Day pretends to be Rick Moranis and fails. But all these folks are the little Playmobil people dwarfed by the towering Robot/Monster Action Figures with Extendable Parts and Real Working Missiles on young Guillermo’s bedroom floor. Deal with it.

My biggest grievance is that one movie can’t contain all del Toro’s ideas. His Hellboy series suffers from the same problem, but it’s really bad in Pacific Rim because of all the time hogged by epic beat-downs and crumbling skyscrapers. It’s like Oblivion in that there’s too much narration at the beginning, but worse because of all the interesting stuff we glimpse in the opening montage that’s never dwelt upon again. Having just re-read the amazing World War Z (screw the movie; the novel is a horror masterpiece), I wanted Pacific Rim to go the same route and paint a global picture. How does humanity react to the Kaiju threat? How does each nation respond? We get glimpses, and the Jaegers are clearly defined by the culture that built each one, but there’s no time to stop for details. What about the whole telepathic-link thing? How was it invented? How does it work? That could be a film all by itself. So could one subplot involving a shady underworld devoted to scavenging dead Kaiju parts (those scenes are when the movie is most del Toro-esque). And the bad guys -- what’s their world like? How do they make/breed the Kaiju? Del Toro must have all this on record somewhere; you can detect the joyful effort he put into world-building. But he needs a different medium to share it with us. He needs a long comic series, or a thick trilogy of novels. One film is not enough; it has to live in the present. And I doubt there will be more films because Pacific Rim kinda flopped. Bless his heart, del Toro isn’t gonna compromise his weirdness enough to appeal to the drooling masses. But he’ll always have us faithful. We get it. Even when it’s stupid and indulgent, we get it. What director could ask for more?

VERDICT: If you go bonkers for del Toro, Pacific Rim is a movie to squee at! 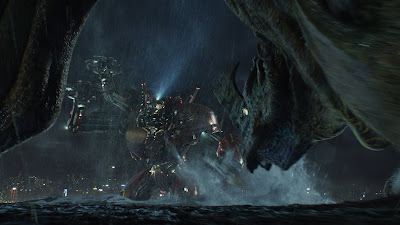