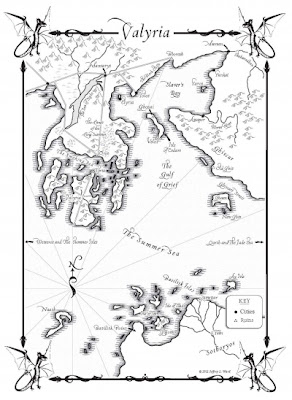 I admire George R.R. Martin, I aspire to be him...but, Christ, I doubt I’d want to literally be him. Fanboy rage, anyone? It’s rather well known that Martin has to go through life fending off the snarling, snapping jaws of his own devoted readers. The dude is about two-thirds of the way through writing an epic, gigantic fantasy series that many consider better than Tolkien (if I’m one of those people, I’d never admit it, cough cough). He’s been put on a pedestal by a whole lot of nerds, and the thing about nerds is that they’re utter bastards to the things they love. And George R.R. Martin is not the kind of guy who whips off a book a year. Oh, no. He has so many ideas, so much he wants to include, that he grapples with his own narrative. He’s created a monster. Two monsters, actually: his titanic series and his impatient, judgmental fanbase. Which brings us to the problematic fourth and fifth books in A Song of Ice and Fire. This continues my last post on the topic.

A Feast for Crows and A Dance with Dragons are awesome. I loved them. That said, they also suck. Boy, do they suck. For the benefit of non-fans, assuming they haven’t fallen asleep by now, I shall explain why. As Martin wrote the fourth book, it got out of hand: too huge, too sprawling, too many POV characters who needed proper care and attention. The only thing he could do, really, was prune the manuscript, saving a bunch of material for the fifth book. To the utter rage and frustration of many, he did this by dividing the narrative by characters rather than chronology. Picture this: you’ve waited forever, for-fucking-ever, to learn what happens next. A Feast for Crows FINALLY appears on bookshelves, you spend your gas money on the hardcover, and as you begin to read it, you make the horrific realization: someone’s missing. Several someones. There is no trace whatsoever of badass exiled princess Daenerys Targaryen, snarky fugitive dwarf Tyrion Lannister, or crippled mystic-in-training Bran Stark. Jon Snow, everyone’s favorite know-nothing Watch commander, gets a mere cameo. Again, for the benefit of non-fans (who I’m sure have fled screaming at this point), I must explain that these characters are PRETTY FUCKING IMPORTANT AND BELOVED. Instead, we get...Brienne of Tarth searching endlessly for Sansa Stark in all the wrong places? Samwell Tarly puking a lot? What is this shit? Why is half the novel cluttered with Ironborn, whom no one likes? Who the fucking hell is “Areo Hotah” and why does he get his own chapters? Did fan-favorite Davos Seaworth just die offscreen with no fanfare? MARTIN, YOU COCCCCKKKKKK!!!

Yep. All this happened a few years ago so I didn’t experience it firsthand, but I’ve heard a great deal about the hate people have for A Feast for Crows. And I agree, it’s the weakest entry so far. Martin’s decision to leave a bunch of the main protagonists out was a ballsy one and won him little love. He opted to focus on things that, in the long run, weren’t as important. Grandiose new subplots were dragged onstage; we got a whole lot of the scheming Greyjoy family as they scrambled to elect a new ruler, and we met the Martells from the southern province of Dorne, who had their own dreams and schemes going, and it was...hard...to...(yawn)...care that much. Feast has less action than the previous three books and more meandering. Honestly, my favorite chapters belong to Cersei Lannister, the icy-cold queen mum of King’s Landing, who, up until that point, had been an evil bitch who we all loved to hate. But Feast got inside her head for the first time, and damn if she didn’t become someone I was perversely rooting for. One of the best things about Martin’s series is the incredible, amazing, and numerous strong female characters. Arya Stark, Daenerys, Brienne, Asha Greyjoy, Ygritte...these are women whom all women can root for, women who defy convention and walk their own path while still embracing womanhood. Watching Cersei battle her political rivals and struggle to keep her house of cards from falling down...well, it was far more gripping than Brienne’s fruitless scavenger hunt, that’s for sure. Yeah, A Feast for Crows doesn’t quite work, but the great thing is, it’s still a delight to read. That’s how skilled Martin is. 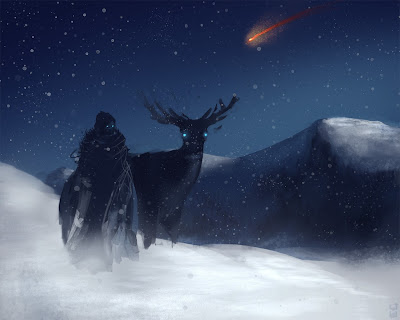 A Dance with Dragons is loads better, though not without its narrative gremlins. The first chunk of the book takes place concurrently with the previous volume, forsaking Westeros (for the most part) to focus on the far North and the lush, bloodsoaked Eastern continent of Essos. Here’s where Martin really broadened his canvas, and also where the series as a whole started feeling top-heavy to me. We get our fix of Dany, Tyrion, and Jon Snow, and their adventures do not in any way disappoint, but the farther they travel from the previously known narrative atlas, the more one wonders if Martin can reign things back in. The story used to be about who would get to rule Westeros and what to do about those undead Others beyond the Wall, and it is still about those things, but it’s also about a zillion other plots and missions and vendettas and mysteries and personal journeys. This is best illustrated during the second half of Dance, when the timeline catches up with that of Feast and Martin jumps around, visiting all his characters and just sort of...checking in. Nudging each subplot further along in a vague kind of way. I know he’s got two more books to go, each clocking in at over a thousand pages, but considering how many plates on sticks he’s now spinning, how’s it all gonna fit? Dance is a wonderful book, I loved every page, and when it ended, I felt a little anxious. Do we really need another claimant to the Iron Throne? Does anyone really care where Rickon’s been all this time? When the hell will Dany stop dragging her feet and sail for Westeros? How long’s it gonna take Arya to become the hardcore ninja assassin she was always meant to be? I know this is confusing to non-fans (who I must have reduced to a fetal position by now), but imagine how it is when you care about all this!

Basically, Martin needs to drop an asteroid on Westeros. I don’t mean that literally (well, it’d be cool, but...). I just mean that he should grab all his scattered, far-reaching plot strands and find a way to knot them tightly together for the big, epic finish we all crave. We already know he’s brutal to his characters (Dance ends with the maybe-death of yet another beloved main protagonist), so I’m guiltily wishing he’d cull away a lot of the peeps we don’t really need and find his way back to a focused narrative with main characters in the single digits. I’m sure we could spend many more books wandering through the glorious vistas of his fantasy world, but if we do that, dude’s gonna croak before he wraps it all up. He’d BETTER have a fucking endgame in mind, and he’d better get there without another bushel of sidequests and distractions. Now do you see why I’d never want to be George R.R. Martin? His series is a fucking frankenstein monster and it’s all his fault. And we, his fans, know it. Hell, I remember reading an entire New Yorker article devoted to the love-hate relationship between Martin and his readers. Now that I’ve read the books too, I get it. The Winds of Winter should be out next year. Should. Should should should. Meanwhile, the forums are getting nastier and Martin’s growing older and, oh yeah, that silly little TV show is catching up...............

Why does all this make me so gleeful?

To be continued! Someday! 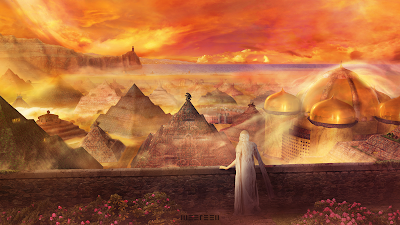