To Squee Or Not to Squee: Abarat 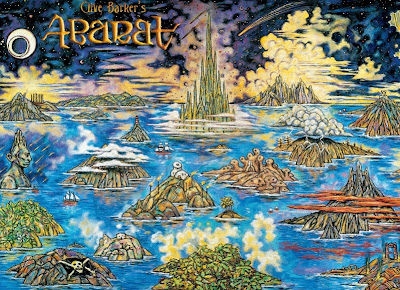 Y’know, it’s almost a relief to hit something on my Cautious Enthusiasm list that I can write about in a negative fashion. I do tend to be excessively forgiving, but sometimes you just gotta crack your knuckles and get a little mean.

Like the last two posts, this addresses the theme of self-indulgence. To recap, we forgive Guillermo del Toro for dipping a tad too deeply into his bag o’ whimsy, and we forgive George R.R. Martin for taking every little goddamn idea that pops into his head and cramming it into his increasingly freewheeling books. These guys do great work, so it’s all good. Which brings us to Clive Barker, whom I both worship and want to kick in the pants. Barker is a very busy man -- he writes books and stories, he produces movies, he paints, he does video games and comics, and he probably carves giant faces into cliffsides, who knows. Perhaps because of this constant project-juggling, his literary work is wildly uneven. Books of Blood was a horror masterpiece while The Great and Secret Show did little for me; Coldheart Canyon was awesome while Mister B. Gone was lame and repetitive; Imajica wowed me while Sacrament baffled me. And so forth. He’s a man of incredible invention who could stand to take some stern fiction-writing workshops. And his Abarat saga...oy vey. 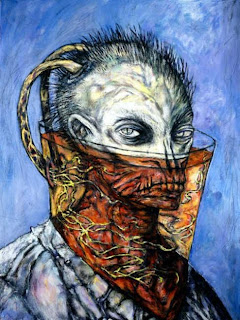 Abarat is a series for young adults. It began in 2002 and three books have been released so far. So there’s one huge-ass problem right there. In all fairness, it takes Barker awhile to complete each entry because they are lavishly illustrated with oil paintings by the author, dozens per book. Pretty cool. The series really has no clue what it’s about, but on the surface it’s about a girl named Candy Quackenbush who resides in Chickentown, MN, without a doubt the most boring town in the nation. Candy hates life, but one day, wandering in the flatlands, she stumbles upon a jetty and lighthouse, gets chased by a monster, and is swept away into the Abarat, a marvelous archipelago of twenty-five islands, each stuck forever at one hour of the day (yes, there’s an extra island; it’s complicated). Candy has many adventures and learns that, naturally, she is incredibly important to the fate of the Abarat and our world as well. Her exploits lead to peril in the form of Christopher Carrion, the evil ruler of the Island of Midnight. And his evil queen mother. And an evil wizard with a Napoleon complex. And an evil billionaire architect. And an evil princess who lives in Candy’s head. And eight evil demigods. And an evil species of beings from deep below the ocean. And an evil species of beings from some other universe. And Candy’s evil, abusive father. And I am not making a single one of these antagonists up. Don’t worry, though, there are just as many loyal sidekicks and hangers-on to Candy’s quest, and about a billion other characters and places that Barker demands we memorize.

I’m sorry, but these books are a mess. I didn’t notice back when I first read them, because I was a kid. But that’s the problem with taking forever to write a series: your target audience becomes jaded adults. Rereading the first two, and then diving into the third for the first time, I was somewhat dismayed by how clumsily Barker creates his world and characters. There is just TOO MUCH going on, and he jumps about from subplot to subplot without spending enough time on any of them. He’s trying to marry a huge, epic world with the terse, fact-paced narrative that most young adult novels are required to have. And he’s failing at it.

He’s especially bad at writing action sequences. Again and again, Candy gets chased by the villain-of-the-moment...and chased and chased and chased...and the whole time, she and her enemy are fucking CHATTING like they’re sitting next to each other at the salon. Everybody talks in the long-winded, expository manner you see in comic books, and as a result, everyone is interchangeable. Candy is a sweet, compelling heroine, but the more time goes by, the more she gets flattened by Barker’s bad dialogue and dragging, ham-fisted narrative. The most recent book, Absolute Midnight, made me wince. So much is going on that characters who used to be somewhat interesting are now relegated to a handful of generic lines, because here comes a whole new gang of folks to be introduced! (Including an abrupt, poorly-defined, utterly forced love interest.) Dialogue scenes go on for multiple chapters, yet an event as momentous as the destruction of an entire island by a titanic sea monster is whipped off in a single paragraph. The book’s endless climax resolves itself with a cliffhanger that made me moan in despair, because it leaves no hope that the story isn’t gonna get even huger and more thinly-spread in the next book, which should be out in 2024 or so. Also, something happens that...well, you know that scene in The Dark Crystal where Jen and Kira fall off a cliff but are saved because Kira has wings and never thought to mention them before? It’s like that. Only worse, because it involves a major character who’s been around since the beginning. If literature professors ruled the world, Barker would be hanged for less. 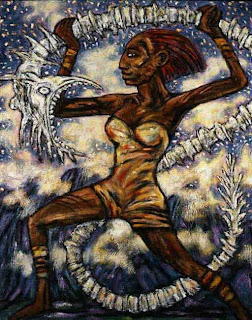 There is one huge redeeming thing about the books, and that’s the illustrations. Barker’s paintings are absolutely wonderful. He paints with no regard for rules or discretion, creating eye-popping images from knife-slash strokes and bright, delicious colors. I’m appalled that picture-less editions of Abarat exist, because it’s like eating a cone with no ice cream. I could look at the art for hours. But even this leads to another issue, which is that Barker clearly puts the art before the story. Some random character will pop up, introduced and then never seen again, and we’ll realize: Barker painted this character, made them up on the spot, then looked for a way to awkwardly insert them into the narrative. His paintings are created from the improvisational depths of his fevered mind, and so their role in the book is often arbitrary. Half the time, I can’t even link an image to the story at all. Also, Clive? I’m not stupid; I own Visions of Heaven and Hell, your 2007 art book, and I know you’re taking older paintings and putting them in Abarat to fill space. That’s a cop-out, Clive. I don’t mind looking at them again, but you should be focusing more on writing something that doesn’t read like a swarm of Post-It notes stuck to a roller coaster.

Yep. Abarat kinda sucks. And I’m really sorry to say that, because I continue to admire Barker and all he’s done for the genres of fantasy and horror. The art alone almost makes the books worth getting, but does it make them worth reading? Because by the time the next volume comes out, I may be A) in my thirties, and B) devoid of any more interest. To paraphrase another role model of mine, Roger Ebert: In a world where anything can happen, does it matter if anything actually does? The marriage of luscious art and shitty writing is so drastic that Barker himself inadvertently put it best, with this image here: 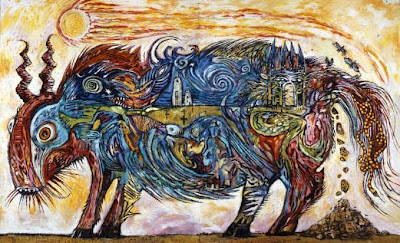 VERDICT: I’ll give the illustrations a squee. But the story should be ripped up for parade confetti. It’d read about the same.
Posted by Dang-Blasted at 5:42 PM