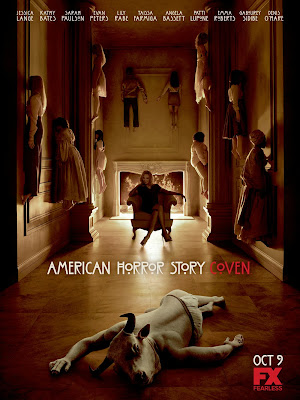 --Before we begin, lemme share a bizarre dream I had way back in February. I dreamed that Season Three of American Horror Story was starting and I was watching it at home with a whole bunch of people. A viewing party! The season began with a very dreamlike scene indeed: Jessica Lange was in a house that was haunted by...milk. Seriously. There was lots of baby stuff around -- a nursery, a crib, tiny clothes -- and milk was spurting and flowing from everywhere, covering the floor. Weird, huh? I can sort of imagine a scene like that in AHS. But then the show stopped, and right there in my living room, a team of actors -- including Lange, Sarah Paulson, Evan Peters, Lily Rabe, Taissa Farmiga, and James Cromwell -- performed a bit of guerilla theatre, including spoken poetry, while dressed in odd costumes. I swear I really had this dream. And, you know? It’s kinda fitting. A strong core group of American Horror Story actors have emerged, and every season, they put on new costumes and entertain us in new ways. And it’s so cool.

--Now then, a preliminary examination of Season Three, which is subtitled Coven. It’s witches! All witchcraft, all the time! Also, voodoo. The season hasn’t begun yet but I may as well prepare by unpacking what we have so far. Can you tell I’m excited? Coven takes place largely at a modern-day school for young witches, but this ain’t no stinkin’ Jill Murphy novel. Something bad is happening to the spell-casters of today and something must be done about it. Complicating the matter is the aforementioned voodoo, whose practitioners are kinda like the rival team, only in this case, the teams can murder each other with magic. Flashbacks to various time periods (Salem being one, obviously) will flesh out the history of witchery in the US. I admit that I’ve never been that interested in witches, but AHS hasn’t let me down and I like that this theme allows for a ton of strong female characters.

--So we’ve got some interesting and trippy ads to look at, as usual. Huh. A lot of floating women, suggestive snakes, and vertical planking. As always, it’s hard to tell how much this imagery has to do with the actual show. But it looks neat. And I love the repeated use of “House of the Rising Sun.” My favorite ad is the one that actually shows the actors, because the sight of that familiar gaggle of faces in new roles thrills me. And is that Kathy Bates? You bet your sweet ass it is! What a damn good catch for the show; I love how they bring in such pedigree, even if the roles aren’t always worthy of the actors.

--Which reminds me, why the hell did James Cromwell score the only Emmy win for AHS: Asylum? WTF? His performance was BAD. Not horrible, but pretty bad. I blame the character he had to play rather than the man himself, but still. Were they just like, Oh, it’s James Cromwell, give him the Emmy by default? Ergh. Jessica Lange and Sarah Paulson should’ve gotten the gold. Awards ceremonies are arbitrary bullshit. But back on topic!

--All the ads pale in comparison to the opening credits sequence, which has been made available for us to drool over. I freaking love it. It’s actually pretty damn scary. Pointy-hooded figures drift through the bleak forest. Pentagrams, animal skulls, and voodoo dolls are utilized. Some sort of skeletal winged creature makes a spine-chilling cameo. Women dance about a blazing fire. The actor’s names are superimposed over fucked-up historical artwork. There’s a goat in there somewhere. So cool! A bit of a departure from the first couple seasons, but very striking and full of mystery. What clues do these images hold? Why does Lily Rabe’s name dissolve like smoke? What the hell appears at 0:24? (Looks kind of like one of Lady Gaga’s outfits...) And how much will it suck if that winged monster doesn’t appear in the actual show? Seriously, these credits have ratcheted up my anticipation.

--One thing that bugs me a little is how they designate main cast vs. recurring cast. It seems awfully arbitrary. Like, why wasn’t Frances Conroy considered a main cast member in Season One when she was clearly one of the most important characters? The cast list in the Coven opening credits is missing a couple names I expected to be there, most notably Angela Bassett and Gabourey Sidibe. We’ve been led to believe they were both cast in major roles. Why leave them out? And I know this is ridiculous, but I can’t help but notice that these two omitted actresses are black, while the nine “main cast members” are all white. Obviously, the showrunners aren’t being consciously racist, but in all three of its seasons, AHS has never had a non-white person on the main cast list, and this was their chance to change that, and they didn’t. Don’t get me wrong, I’m thrilled that all these people are on the show in the first place. But I don’t grasp the rules by which some characters are more “major” than others. I’m sure we can all agree that we’d rather see Bassett’s name in the credits than Emma Roberts’.

--Just a silly qualm. I am so, so ready for Coven. My weekly episode recaps shall commence before long, so get comfy and put on a pointy black hat because here we go once again.
Posted by Dang-Blasted at 2:46 PM