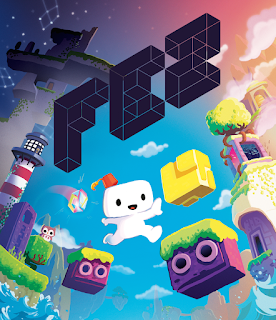 There are four owls. They can be found somewhere in the game. You need to speak to all four in order to unlock the secret of the giant stone owl statue. What? You didn’t have a clue? You saw an owl once, but assumed it was just part of the scenery? Oops. What a silly fool you are. Better get searching. Yes, I know the map is gigantic. Didn’t you realize there was a clue to the owls’ locations in a random room way back near the beginning? Well, it’s not our fault if you’re unobservant! Oh, and the owls only appear at night. Good luck, ya sorry bastard.

Welcome to the unique mix of glory and utter frustration that is Fez. I have such a weird relationship with this game. I recognize it as one of the coolest games I’ve ever played, but at the same time, it pisses me off to no end. The first time I played it, I was so nonplussed that I left it off my games-of-the-year list, which was probably a mistake. I included it in the Myst review series in part so I could bitch about it. But doing so meant replaying it, and, dude, I liked the game so much more the second time around. The great things about it loom larger, while the shitty things about it have...well, not entirely diminished. So brace yourself for a schizophrenic post.

Once again, we have a game that barely seems to relate to the Myst series, until you pay closer attention. It’s heavily pixelated like The Dig, but this time, that’s a style choice, a little slice of retro 8-bit hipsterdom. Its initially flat, boxy aesthetic certainly can’t compare to the sumptuous vistas of the Myst games. But there’s plenty in common. You’re a blank-slate protagonist tossed into a dreamlike open world consisting of several distinctly color-coded environments, and there’s no way to die, no enemies, and lots of cryptic, world-spanning puzzles to solve. Our beloved formula returns! Fez stars a little marshmallow-dude named Gomez who lives in a comfortably flat, two-dimensional plane, or so he thinks. Then the village elder summons Gomez for an epic quest! He is brought into the presence of a giant yellow cube that’s supposed to give him quest instructions, but the cube explodes and Gomez must hunt down all its fragments to save the universe. Since the cube presumably did not intend to explode that day, one wonders what Gomez’s quest was supposed to entail. Doing the cube’s tax returns? 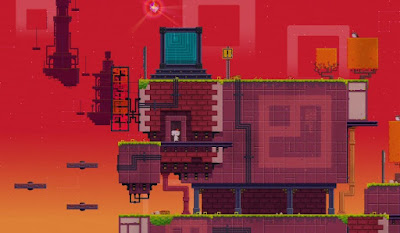 This is where the very cool, unique mechanic of Fez comes into play. Gomez receives the titular accessory, which gives him the ability to perceive and manipulate a third dimension. You see, Gomez’s world is fully 3D, but he (and the player) perceive it from a fixed 2D perspective. Thus, you can fuck with spatial physics by rotating your view ninety degrees. Is a platform too distant to reach? Rotate, and boom, it’s now inches away. Are two patches of climbable moss annoyingly far apart? Rotate, and blam, they connect. Gomez must study the world from all angles as he hunts down the little golden cube pieces, and his hunt takes him in a non-linear fashion through a variety of vibrant zones. I’m not exaggerating when I say Fez is one of the most gorgeous games I’ve ever seen. The retro graphics fool you, until you begin to notice the sheer amount of detail crammed in. Beautiful textures. Ambient light and water. Color gradients that make the artist in me swoon. Each area is a vertical labyrinth and finding the correct path of ascension enables the player to study all these amazing little throwaway details. Fez feels like an actual world with actual history; its crumbling ruins suggest epochs we can only guess at, and each new zone (an island chain, a neon-lit city, a gothic graveyard, and much more) ties into the overall archaeology. This alone is reason to bump up the game’s letter grade.

But if we’re scrutinizing a potential successor to Myst, we can’t just go by looks. What about the puzzles? Here’s where things get weird. On the surface, you only need to collect the golden cube bits, which form 32 larger cubes and can be collected via basic exploration and platform-hopping. New areas introduce mechanics -- bombs, moveable sections, invisible platforms, time challenges -- that keep things from feeling repetitive. However, there are also 32 “anti-cubes,” and getting them is in no way straightforward. The anti-cube puzzles are all over the map, figuratively and geographically. Some are benign enough: move some blocks into the right pattern, use this treasure map to spot a hidden platform, etc. Others ooze past frustrating into the realm of unfair. There is an anti-cube that only appears once per week, in real time. Several require you to translate a made-up alphabet and a numeric system. There are puzzles that demand you visit a certain place when night falls; miss it and you’ll have to wait around for an in-game day. Other puzzles are impossible unless you’ve beaten the game and unlocked stuff. And what makes all this annoying isn’t difficulty so much as lack of obvious clues. 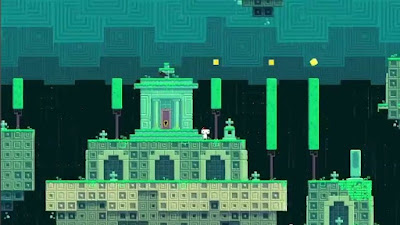 Kindly peruse this cute webcartoon about furries playing Until Dawn. It’s a good litmus test for what type of gamer you are. Me, I’m Rick the lizard. I’m a completionist; I like the feeling of knowing I’ve found everything, or as much as possible. Fez is incredibly daunting to me. Yes, I’m good at solving puzzles, but a lot of the puzzles in Fez aren’t what I’m used to. Translate a fucking alphabet? That is a job for a linguistic anthropologist, not a gamer. Fez accommodates the casual player: you can beat the game’s story without collecting a single anti-cube. But if you’re like me, you’ll feel inadequate. The first time I played Fez, I was left confounded and unsatisfied. When I went back, I was determined to penetrate deeper into the game’s secrets. Having done so, I feel better. Fez does reward your obsession: decrypt its codes and entire new vistas open up. I did what most people will do: I cheated. But is it really “cheating” at this point? Yes, someone online translated that damn alphabet for me, but that’s kind of the world we live in now. Fez is a game that requires a support structure.

I don’t believe you can make a game with such deeply-buried treasures and expect everyone to spend the time and sanity digging them up. One big problem I have with Fez is that playing it gets exhausting. If I find a crucial clue to something on the far side of the map, it’s gonna take ages to transport Item A to Slot B. There’s a warp system, but it doesn’t make re-climbing all those platforms any less tedious. Yes, the map screen tells you which areas still contain items and secrets, but was that one treasure chest near the ruined observatory, or in the crypts, or back in Gomez’s home village, or....? You see the problem. Even the gorgeous details begin to mock you. Is that pattern on the wall important? If the owls can talk, what about the frogs and worms? Did I miss something crucial in this area, and will I be able to remember it for future reference? It’s a completionist’s nightmare: a disorienting game that doesn’t provide the clues needed to point you in the right direction. 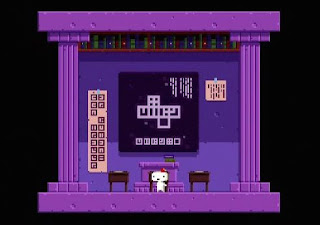 Still, Fez does grow richer the more time you pour into it. I’ll keep chipping away. Got plenty of time to do so, because designer Phil Fish had some sort of ugly meltdown, decided the gaming industry was bullshit, and canceled a planned sequel. Thus we can lump Fez into the same category as Braid: a well-made but highly pretentious indie that pompously deconstructs the very DNA of classic gaming, created by an artsy dude who sneers at us poor, unenlightened plebes for merely wanting to push buttons and collect stars. Funny thing is, a game can be all of the above and still be awesome. I would say that Fez is awesome. But if you’re gonna play it, you need to take deep breaths, align your chakras, and summon up reserves of patience you didn’t know you had. Because maybe this time around, you’ll notice the paintings that pinpoint the locations of the four owls. And you’ll remember to visit those spots during the nighttime. And you’ll already have a guide to morse code open in your browser. And your phone will be ready to scan the QR code in the throne room. But you still haven’t translated the riddles in that one chamber, and you forgot to lower the water level on the islands, and the Black Monolith is still a fucking mystery, and what’s with that creepy skull artifact? And... 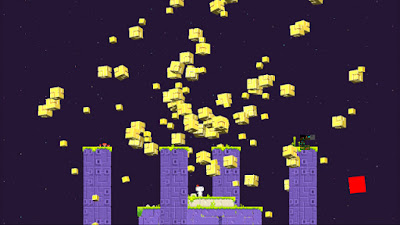