Picture a map of all the games you like. An atlas with land masses, oceans, towns and cities. Ignore that each game exists in its own universe; mash them up. Here’s Raccoon City. There’s Midgar, on another continent...and over there, the ruined vistas from Gears of War. Look up on a clear night and you’ll see Rainbow Road. Now, turn your eyes across the sea. Somewhere out there is the archipelago that make up the Myst series. Myst Island, Riven, Tomanha, Serenia and its stupid hippie mushroom tombs -- they’re all accounted for. But a map has edges. What’s past them? What exists where the video game atlas goes blank?

Once again, we’re diving into the mind of Mateusz Skutnik, Polish artiste of many mediums. You may remember my post about Submachine, an incredible little game series that may be reaching its conclusion soon, although it’s the sort of project that never quite ends, or shouldn’t. Skutnik’s done plenty of other stuff, and I’ve been wanting to discuss my second-favorite game series of his, Daymare Town, which you should totally check out and play. For free. Or buy it, because supporting artists is a good thing to do. Especially when they can create something so weird, eerie, unique, and impossible to forget once it’s over. When they fill in that blank space on the map, banishing the void with ink and whimsy. And bad dreams.

The Submachine games are not known for their bright colors, but they’re freakin’ Katamari Damacy next to Daymare Town, which takes bleakness to a whole new level. It’s a world of scribbles and shadows on an off-white background, like doodles in an old sketchbook, which may well be where it began. Once again, we have the profound sense of isolation that characterizes much of Skutnik’s work. His worlds are lonely...but Daymare Town itself is far from uninhabited. You’re never alone, but you never feel welcome. Daymare Town is composed of narrow, crooked buildings with yawning black entrances. The town’s inhabitants tend to be small, furtive, tangle-haired homunculi, though many of them defy such an easy description. They regard you with suspicion, and while some of them can help you, none of them are your friends. There’s no music here, just the howl of wind. And there’s only one goal: to leave. Find the exit. How hard could it be? 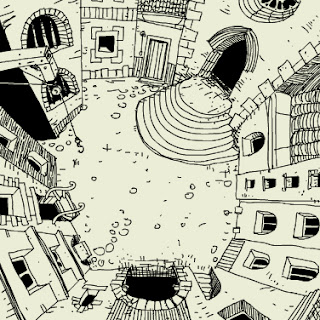 The gameplay of Daymare Town is very familiar. Simple point-and-clicking from screen to screen, as you collect items that you’ll use elsewhere to open new pathways, or solve the very particular problems of the townsfolk -- a thankless job. I would not call the gameplay flawless. As with many adventure games, these fall victim to Skutnik’s particular brand of logic. Just like in Submachine, or the Myst series, this world defies conventional reality. You can step inside a painting, conjure a hot-air balloon from thin air, summon a skeletal giant from the desert sands, you name it. This is all wonderfully fantastical, but it makes a lot of the puzzles deeply illogical, until -- you guessed it -- there’s nothing left but to try rubbing every item on every potential item-using-spot. There’s also a bit of pixel-hunting -- meandering the cursor all over the screen to try and find stuff -- but because the art style is so minimalist, it’s rarely difficult to miss even little things like coins. Still, making it through the Daymare Town games without consulting a walkthrough is...impressive.

I don’t mind. The atmosphere is what matters. Daymare Town is a very creepy series. It’s nothing like a conventional horror game, but it gets under your skin. A lot of it seems inspired by vaguely Scandinavian folklore, gnomes and trolls and the like. Maybe Daymare Town is where bad little boys and girls are sent when they don’t eat their asparagus. The first game plunks you down in the titular town and all you can do is begin to explore, to creep into the slanted, skewed buildings and find what you find. Who are you? How did you get here? These questions may have answers (the protagonist is eventually revealed to be a black-clad chap with haggard features; Roland Deschain, is that you?), but Daymare Town defies all explanations. Once you “escape,” you merely find yourself in Daymare Town 2, yet another labyrinth of streets, mocking you. Sadly, the series got more complicated than it needed to be. Daymare Town 3 is quite ambitious, introducing a tedious mercantile system and sidequests. I normally love sidequests, but in this case, they’re way too hard to grok (poison the guard captain? Why the fuck would it occur to me to do that?), and it’s impossible to do them all anyway because two of them require the same item and there’s only one such item in the whole game. My anal-retentive side screams in anguish at such oversights. 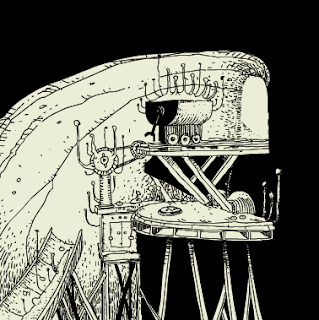 Daymare Town 4 is pretty cool, though. It takes you out of the town and into a wasteland of cliffs and dunes. It’s more fantastical than the previous three, and more detailed, and I love imagining Skutnik hunched over his drawing board (or his tablet; let’s be realistic here), conjuring such unforgettable places and creatures. There are more sidequests, and way more items than you’ll actually need, but while the third game committed the cardinal sin of a limited inventory, the fourth one hands you a gigantic backpack that can hold all the useless junk for you. Of course, sifting through the junk, trying to find the items that actually matter...not so great. I still say these games could benefit from better puzzle logic. But, then, logic has no place in Daymare Town. It’s devoid of context. It just is. If the Submachine was a dumping ground for all things forgotten, Daymare Town is the repository for everything, and everyone, unwanted. And you yourself don’t want to be there, because once you become a citizen, you’re trapped. You’ve lost yourself, just like all those scampering, trollish little wretches that lurk in the alleys and doorways.

Games like this evoke so much, and I wish I had a fraction of Mateusz Skutnik’s talent when it comes to creating worlds. What Daymare Town lacks in coherent gameplay, it makes up for in vision. Yes, it gets frustrating when you’re stuck in a rut and nothing in your inventory seems useful. I can’t always claim that playing these games makes me happy. (Except maybe for Daymare Cat, a spinoff platformer that weaves the austerity into joyous music.) But everything about them entices me. I can’t help being attracted to the blank space on the map, and wanting to help fill it in. That said, I’m glad Daymare Town isn’t real, because such a joyless, freaky, cryptic labyrinth of lost souls should not be wished on my worst enemies. Except maybe for that one guy. Fuck that guy. I’d send him to Daymare Town and let the shadows devour him.

Not you, though. You’re cool. And that’s why I invite you to appreciate the games I love. Wander my map. 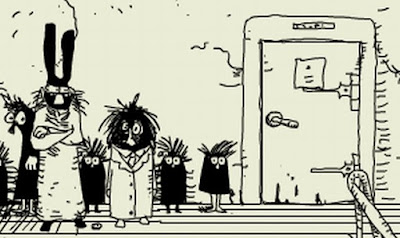