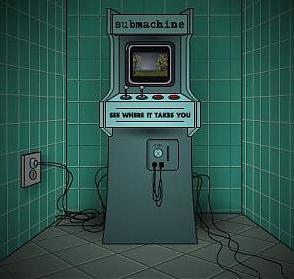 Submachine -- Fallen Through the Cracks

In my Myst IV post, I pointed out a couple in-development games that seem to be following in the footsteps of the Myst series -- by which I mean, completely copying it. Let me stress that this is not a bad thing; I’ve always believed that if a formula works, why toss it aside? Myst V tossed the formula aside and I will always resent it for that. However, you can definitely make a game in the Myst spirit without requiring all those lush pre-rendered 3D landscapes. In the spirit of the franchise, let me introduce you to one of the absolute coolest little Flash game series, which you can play for free on the good old Internet. Follow this link to enter....(dramatic pause)....the Submachine.

What is the Submachine? That’s actually a very good question. The creator of the series, Mateusz Skutnik, is a Polish graphic artist, programmer, and all-around awesome-seeming dude. He has a large library of Flash games to explore, including such series as Daymare Town, Covert Front, and 10 Gnomes. But the Submachine series is by far his most popular creation, and it’s easy to see why. These games are small, quiet, and minimalist, and yet they cast an unbreakable spell over the player. It’s hard to describe how evocative they are. Nope, I can’t tell you exactly what the Submachine is, because Skutnik himself may not know. I’m not sure he intended the series to become as epic as it did; the first game plunks you down in a basement where the only goal is to explore, solve some puzzles, and escape. Nothing out of the ordinary -- but even then, something about the lonesome setting and soft, ominous music makes you think there’s way more than meets the eye. When the second Submachine game came out, this one set in a lighthouse, it became clear: you, the nameless protagonist, were trapped in some kind of abandoned world, and there was way more to discover.

The original Myst began with the unknown, but gradually explained itself as you played the game. The Submachine series is eight games long, with more to come, and it still hasn’t entirely explained itself. Maybe it never will. There are a lot of fan theories; my own theory is that the Submachine is some kind of pocket universe, a place that may be accessible from our own in certain soft spots. As you explore, you find what appears to be the jumbled, fragmented remnants of lost civilizations; it’s as if everything that gets forgotten in our world slips through some cosmic crack into the Submachine, which may itself be limitless. Its indefinite size allows for pretty much anything. Submachine 3: The Loop took a drastic departure from the norm and stranded you in a literally endless grid of rooms where puzzle-solving was your only hope of escape. After that, I think Skutnik pulled his ideas together. I’d say Submachine 4: The Lab is the strongest entry in the series, as you discover an abandoned laboratory and find yourself talking to a mysterious someone over a computer. It turns out that you’re the latest in a long string of explorers who have tried to map out the Submachine -- difficult, since it defies all physics. The head explorer dude is a man named Murtaugh who may or may not be trustworthy. In The Lab, you discover a means of rapid transport around different areas of the Submachine, which feels especially Myst-like. But the great thing about this series is that each entry is very different, with its own visual style and puzzle mechanics. The creativity is boundless.

The Lab is followed by two entries that aren’t as compelling. Submachine 5: The Root sheds a little more history on those who explore the Submachine, and is solid from a storytelling perspective, but lacks the wow factor of its predecessor. Submachine 6: The Edge is, in my opinion, the weakest link, stranding you in a smooth-edged, visually dull sci-fi environment where way too many puzzles involve prodding at green icons on computer screens. Like I said, it’s awesome that Skutnik takes each entry in a different direction, but some of his creative decisions don’t quite pay off. Luckily, he’s back on track. Submachine 7: The Core is really cool and dreamlike, as you wander through the floating garden-fortress of a woman (and former lover of Murtaugh) who may be your true ally, maybe. The most recent game, Submachine 8: The Plan, isn’t content with just one world, but instead brings you several, all overlapping in their own separate dimensions, so you have to remember “where” you are in multiple locations at once. It bends your mind, and it’s great. There are supposedly two more games to go; honestly, I’d be happy if there were ten more games to go. 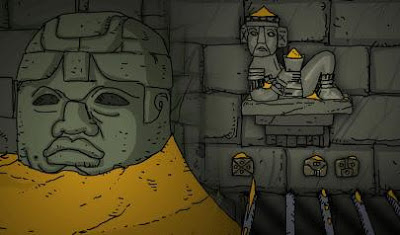 This is a weird thing to say, but stuff like the Submachine series gives me hope for humanity. It’s not just that Skutnik has the brilliant creativity and patience to make these games, it’s that so many people have discovered them and become obsessed fans. There’s a small but devoted culture built around the series, full of people smart and thoughtful enough to really unpack them. It’s so much fun to theorize about what it all means. Skutnik has made a few other Submachine games, not part of the main series but still exploring deeper into the world. He also created Submachine Universe, which is not a game per se, but rather a virtual environment, almost like a library or archive, where he posts various fan theories for anyone to read. Some of these theories are worthy of an MIT thesis, I tell ya. People put so much thought into this humble little game series. There’s just something entrancing about the Submachine. The graphics and colors are very simple, and the music gets under your skin. You feel utterly alone, enclosed, cut off from everything you know. No sun, no fresh air, just endless rooms and jumbled scraps, floating in a void. It’s deeply melancholy, a little scary, and it oozes delightful mystery and wonder. You want to escape someday, yet the thought of remaining lost, of finding more deep, dusty places to explore, is...enticing.

As always, I’m not doing it justice with my overly flowery prose. I seriously urge you to take some time and play the Submachine games. If you’re still bored after playing the second one, I’m sorry; clearly this ain’t your genre. But don’t be surprised if you find yourself clicking on the next link, and the next. Desperate to continue. Wondering why it took you this long to find such an amazing little set of games. Congratulations: you’re trapped like the rest of us. Welcome.

Update 3/14/14
I just got done playing the newly-released Submachine 9: The Temple. I can confidently say that it was awesome and continues the series' gold streak. Indulging in Skutnik's obvious love of mythology and the aesthetics of lost civilizations, the new game has you excavating a ravaged yet gorgeous labyrinth of vaguely Hindu-themed chambers where you'll use "karmic water" to generate machinery out of thin air. As always, it introduces new ideas and puzzle mechanics, but pays tribute to the old (the dimensional-shift gimmick from the last game gets an encore). Story-wise, The Temple is cryptic as ever, redefining the mysteries of the Submachine in a more mystical light and offering unexpected insights into Murtaugh and Elizabeth, the series' unseen male and female lovers/antagonists/god-figures. I found the game to be fairly easy, maybe because I've grown accustomed to Skutnik's style, but I didn't find all the hidden easter eggs, so replays will be in order. As if I needed an excuse. One more game to go, and I'm rooting for a truly epic conclusion that draws upon the entire series for inspiration. We'll know in a couple more years, I guess. In the meantime, still happily lost... 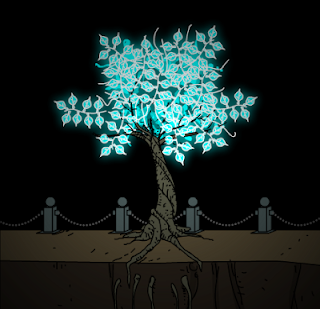