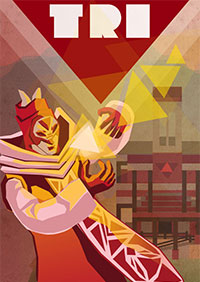 Tri: Of Friendship and Madness -- The Fox Went Out on a Trippy Night

Advance spoiler alert: this blog post does not have a happy ending. So don’t read it if, say, you hated seeing Selma get hanged to death at the end of Dancer in the Dark. OH, SHIT, SORRY. Ignore that last bit! Spoilers! Spoilers!

For some reason, the Myst games are often compared to Portal, often along the lines of, “If you loved X, try Y!” If you loved solving cryptic, vaguely steampunk-themed puzzles inside a magical book, try bouncing around with wormhole technology while an insane A.I. makes catty comments about your weight! If Portal is a puzzle/exploration game set entirely in the realm of sci-fi, and the Myst games exist in a nifty little no man’s land between sci-fi and fantasy, then there must be something on the far end of the seesaw, a Myst-like, Portal-like game that is one hundred percent fantasy. Well, stop digging, because I found one!

Tri: Of Friendship and Madness has a stupid title but is not at all a stupid game. I could recommend it, but there’s this glaring asterisk that I’ll get to later. It’s a game that instantly piqued my interest on Steam. Yes, a lot of the reviews compared it to Portal. With reason: you’re a silent protagonist, apparently female (judging by the timbre of your grunts of exertion), exploring a series of disorienting levels, armed with a device that generates a particular mechanic which you can exploit in various ways. But it’s all magic and mysticism. You arrive at a cliffside temple and encounter a friendly masked priest who gives you the lowdown: there are two playful fox gods, red and blue, who were once carefree best friends. Some undefined malady caused Red to go insane, and Blue ran away in fright. Now the priest hopes you can track down Red and calm his madness so Blue can return and rekindle the foxes’ friendship. Get it? 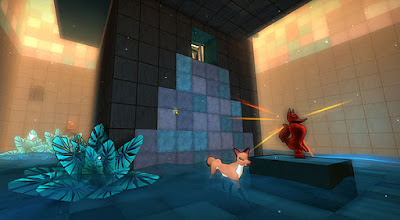 You chase the red fox into a dream-realm where physics is not welcome, and you quickly equip yourself with the Tri, an artifact that enables you to create solid triangles on most available surfaces. This seems simplistic -- it’s like you’re MS Painting shit into the game -- but it fucks with your head in all manner of ways. The triangles serve as makeshift platforms to reach new areas, but then you get a gravity-defying power, allowing you to scuttle like a spider across walls and ceilings, laying down pathways of triangles like an infestation of viral cheddar cheese. The game comes to life at this point, as you must let go of the notion that you’re limited by what’s up and what’s down. It’s important to grasp Tri’s M.C. Escher logic, because each level contains three fox statues that must be recovered to open the way forward. And the levels get progressively more massive. Each is expertly designed, coiling in and around itself, utilizing architectural space in surprising ways. The game’s aesthetic is reminiscent of origami, with bold colors, complex angles, folds and creases and countless hidden nooks. It’s psychedelic and awesome.

Tri is all about patient exploration. The later levels may take hours. The fox statues are tricky enough, but there are also dozens of small totems, the collecting of which unlocks bonus content. Some of these totems are so challenging to find and/or snatch that even a major completionist like me can’t be arsed. There are pools of acid, bottomless drops, areas where your triangles don’t stick, you name it. Many of the puzzles are familiar: dropping crates onto switches and redirecting beams of light gave me flashbacks to The Talos Principle. However, even the unoriginal stuff is made less so by the addition of those crazy triangles. Can’t reach something? Walk straight up the wall! Acid pools got you down? Build a triangle bridge! You’ve got time! Despite the constant presence of the red fox god, who flits tauntingly about, the pace of Tri is leisurely indeed, with scant story elements. And (possible spoiler alert) the whereabouts of the blue fox god are easy to guess, given the paucity of options. There’s no sense of urgency, no feeling that some sort of fantasy-GLaDOS is going to murder you...a nice evocation of the similarly chill Myst series. 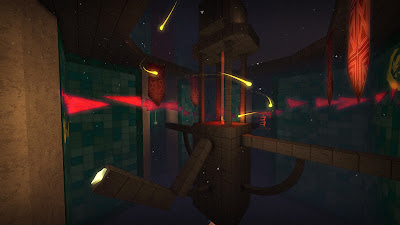 So. All the things I’ve said about Tri have been positive. But I didn’t finish the game. Because Tri has one horrible flaw: its gameplay mechanics kinda suck. I can deal with that TO A POINT. Yes, first-person platforming will always be wonky. You’ll jump, land on a narrow platform, and skid off it to fall fifty feet. Walking on walls is fun, until your invisible foot touches down on the wrong few inches, gravity violently corrects itself, and you fall another fifty feet. Now try doing the same thing while carrying a wobbly crate that seems barely glued to your pinky finger. Prepare to do a lot of falling, climbing, falling, climbing, falling, and climbing. Again, I can live with that if the game is interesting, as Tri is. But from a certain point onward, you are required to use your triangles to redirect light beams. This mechanic is so badly implemented, so frustrating, so tedious, that it ruined me. I spent what felt like hours fiddling with triangles, nudging each vertex here and there, trying to get the beam to point at a tiny target. I created zig-zaggy spiderwebs of light without making any progress. In desperation, I watched a Let’s Play, but the player was just as stuck on those fucking light beams as I was. That was when I forced myself to utter the sentence that kills a game:

This isn’t fun any more.

And I feel terrible. Because Tri really, really tries hard (no pun intended), and it won my heart with its early levels, and I was gonna put it on my games-of-the-year list. I wanted to finish it and I still do. But I am not willing to struggle with its lousy light-bending nightmare any longer. Who the hell test-played Tri and gave that a thumbs-up? It brings everything to a screeching halt. The game smashes into a brick wall and totals itself. Puzzles can take time, but it should be because they challenge the intellect, not because the goal is obvious but the means to get there is next to impossible. All the fun drained from Tri, and I gave up with a couple levels left to go. The end. 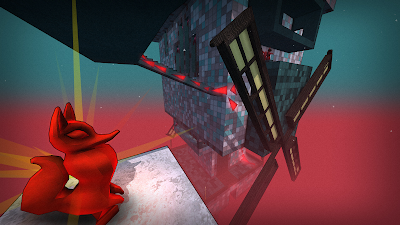 Thus, I can’t recommend this game, unless you are divinely patient. It has plenty going for it. I love its unique fantasy world, which combines different mythologies (mostly Japanese, but I noticed Hindu, Tibetan, and Inuit elements as well). I love how the triangle-building completely overturns and deconstructs traditional level design. I love the quirky music. I love how the protagonist just happens to be a woman. I love foxes. I mean, I really love foxes. But I do not love how Tri sucked me in and then stabbed me in the back with infuriating, poorly realized mechanics. A game that starts out great and turns rotten can be worse than a game that’s crap from start to finish. When I abandoned the horribly-designed Albedo: Eyes from Outer Space after playing for three minutes, I felt sweet relief. But when I gave up on Tri after nearly making it all the way, I felt disappointment and melancholy.

There’s my unhappy ending. The next entry in the Myst review series is probably gonna be The Witness, and, GOD, do I hope I have a better experience with it. I failed to help the cute fox gods become friends again, and it will haunt me for the rest of my life. 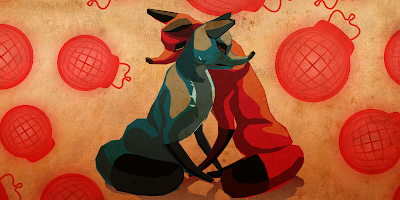