--I see it all now. The first five seasons of AHS were merely an extended pretense to stick a ghost, a witch, and a vampire in a room together and have them fight. Well played.

--I was oddly stunned when I made the very recent discovery that Hotel only has twelve episodes. Why, I’m not sure. Some might call it a warning sign, but maybe they just didn’t have enough story to fill thirteen hours, and didn’t want to stretch. I’m okay with that; hell, if Freak Show had done twelve eps, we wouldn’t have gotten the stupid Alligator Girl subplot. So, because the season finale is next week, “Battle Royale” had to huff and puff all over the place, knocking off characters and tying up loose ends. Was it satisfying? Yes. Was it all a bit muddled? Also yes. But we finally (fucking FINALLY) got some more Sally backstory, and that’s all I was really hoping for.

--Time to thin the ranks! We began with a rehash of Iris and Liz’s gunslinging, which came to a premature halt when Iris realized she was pumping lead into her own sweet baboo. A tool to the end, Donovan shielded The Countess with his body. His dying wish: to be hauled out of the Cortez and spared from eternal ghost-life. Thus, Donovan’s arc ended on a cliché, the deathbed reconciliation with an estranged parent. But the actors sold it. And we got the Kathy Bates Emmy Award moment when Iris communed with her son’s ashes. And then, of course, she smeared Donovan all over herself like a spice rub and ascended to the roof so the breeze could distribute him across the West Coast. Beautiful. Weird. Inappropriate. American Horror Story.

--All this allowed the wounded Countess to slither off into the hotel’s depths, where Sally tended to her. Not out of goodness, of course. This week, the characters all placed bids on who would kill The Countess, and Sally just wanted to ensure a sweet bargaining chip. With a captive audience, Sally revealed her tale of woe: back in 1993, she was in tight with a pair of grunge rockers. During a sexy, drug-soaked night at the Cortez, Sally hit on the great idea of sewing her body to those of her lovers, so they could be together forever. This is your brain on drugs! The rockers both died from overdose (Miss Evers’ burbly cackles were the ickiest part of the scene), and Sally spent five days tethered to their corpses. Her misery and suffering provided enough negative juujuu to summon the Addiction Demon, I guess. Now we know why she sews people into mattresses: like the other ghosts, she’s stuck in a holding pattern. The Demon remains obtuse. I have a new theory that it’s really March in disguise, and Sally’s been his victim this whole time. We’ll see.

--The Lowes went home, all together again! Awwww! Scarlett seemed mostly exasperated by the knowledge that her entire family were vampires and/or serial killers. I seriously wouldn’t be surprised if she’s removing and wearing Grandma’s skin by the end. This is your brain on monstrous parental neglect and copious emotional trauma! Lowe kidnapped a dude to feed to his wife and son, only to find that all the other Lowes had been abducted (by The Countess, I guess?). Back to the Cortez he went, where Sally ordered him to commit the final Ten Commandments killing -- her own goal being to kill John and have him forever. Did he just leave the dude in the trunk of his car or what?

--For Countess-hunting, Iris and Liz brought in the big guns and sprung Ramona from her prison. In the process, we learned that Ramona killed and ate all the nouveaux vampire kids. I guess that’s one way to end a subplot, though I would have preferred something more ballsy. Stricken with measles, Ramona needed a pick-me-up, and who should come strolling into the Cortez but QUEENIE FROM COVEN! Outstanding! I can’t help it -- I love these surprise seasonal crossovers. Sadly, our beloved sassy witch was a bit oblivious to the danger. But we got to see Queenie fight Ramona (probably thinking, “This bitch looks weirdly like an immortal voodoo queen I used to know”) and it looked like she’d win, until March dropped in to add a new rule to the great book of nerdy debate topics: a witch’s powers don’t work on a ghost. March stabbed Queenie and Ramona ate her, which SUCKED (no pun intended). I wish the show wouldn’t bring back old characters just to snuff them, but seeing Queenie was still great.

--All fired up, Ramona strutted into the penthouse suite and found The Countess newly refreshed, thanks to the sacrifice of her last two blonde vampire boys. We were spared another catfight, because Ramona, to her own disgust, found that her hatred for The Countess masked the same old helpless desire. Alas...with her sexual allure, The Countess could have had all the happiness she wanted, but she blew her chances and wasted the best lovers. She asked if she could take little piranha-faced Bartholomew and leave to make a fresh start. Ramona couldn’t quite say no. So they had sex, because why not, and then The Countess packed her bags and skedaddled. She almost, almost got away. But Lowe was waiting in the elevator, and unlike certain front desk clerks, he knows where to aim. Goodbye, Countess. Her startled-looking head became the final trophy of the Ten Commandments Killer, reminding us all that Thou Shalt Not Commit Murder and Thou Certainly Shalt Not Commit Enough Goddamn Murders to Fill A Fleet of Dump Trucks. March denied Sally the right to claim John’s life. I doubt she’ll give up that easily.

--So March got his happy ending? Well, maybe. Someone got a happy ending, but not who you’d expect. March was all aflutter when The Countess’s ghost turned up, massive wads of black silk erupting from her décolletage (one more costume commentary! Ha!). Eternity with his bride! But The Countess herself was wooden, stripped of any remaining happiness or peace. She’s lost all her lovers, leaving only chipped beef on toast with a man she loathes. Then Miss Evers spilled the beans: it was she and not The Countess who betrayed March to the cops way back when. She had hoped that death and afterlife together would show March her lovestruck devotion. March coldly gave her the boot instead. But this moment of heartbreak for Miss Evers became her triumph. Freed from any delusion that March cared for her, she shed her apron and left the room with dignity, her business finished. Off to a proper afterlife where her son is waiting, where endless stained bedsheets cry out for the sponge of a true professional. Miss Evers gets to go, while The Countess is pinned under March’s oily leer. Which she probably deserves.

--I guess Ramona owns the hotel now, but something tells me Iris and Liz will really be in charge. Time to turn the old dump around, clean the corpses from the mattresses, tear out March’s mousetrap-maze of traps and disposal chutes, smother Bartholomew with a pillow, feed some kale to the hipsters to shut them up, and user in a new wave of guests who can be reasonably sure they won’t get impromptu tracheotomies in their sleep! Oh, and hire a new maid who can handle Miss Evers’ legacy. HA! Can’t be done. 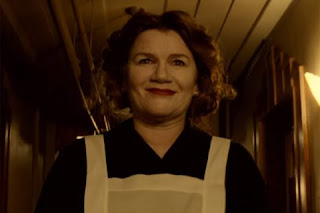