Great news! We got a PS4 this year! Specifically, December of this year. So there will be no 8th-gen titles on my annual games-of-the-year list. Check back at the end of 2016. For now, indie titles still rule my roost and crappy Mac ports remain my great agony. And I seem determined to outdo myself in sheer eccentric variety of taste. Here we go! 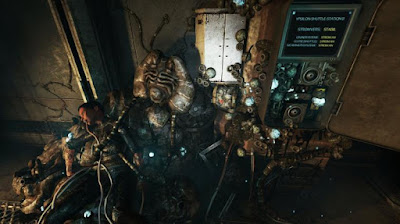 Honorable Mention: SOMA (Multi-Platform)
It’s become a tradition to award a special ribbon to a game I watched someone else play. (If I plan to play it myself someday, it doesn’t count.) I never went near the Amnesia series, because if I’m gonna be creeping through dark spaces with nightmare hellspawn nipping my heels, I want to at least be able to smack the fuckers with plywood or something. SOMA is in the same vein, but pleased me with its mature dive into science fiction and Big Questions. We’re in a dank undersea lab (imagine if David Cronenberg made Bioshock), the world is ending, and the human race, which now numbers in the double digits, is undergoing a quasi-willing symbiosis with a slithery artificial intelligence. To discuss the plot further would be to ruin some elegant twists, but SOMA earns points for the dark intricacy of its storyline and the journey of its characters. Hiding behind the slimy bulkheads and coral-encrusted monsters is the riddle: What makes us human? A fleshy body? A mere clump of neurons? If the world ever does end, we may need an answer, and SOMA did a pretty incredible job. 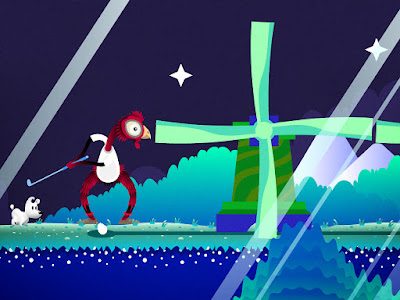 8. Mimpi (PC/Mac/iOS/Android)
These days, any fool can make a 2D platformer. In order to leave more than a momentary impression, it must display a unique charm and sensibility. Mimpi is short but sweet, an appealing little adventure in which a spunky terrier sets out to find his absent owner. We find ourselves guiding the canine hero through his own fantasy world, a trippy collage where a dog’s day-to-day encounters morph into bizarre, whimsical obstacles. The gameplay combines traditional platforming, point-and-click puzzles, and even hidden object sections. It’s a game kids would enjoy, but it doesn’t pander, nor is it especially easy. While it commits one or two cardinal sins (why are we chased by lava? Why are we always, always chased by lava?), Mimpi is both lovable and memorable, as opposed to the seven million uninspired “retro” side-scrollers currently clogging Steam. Woof. 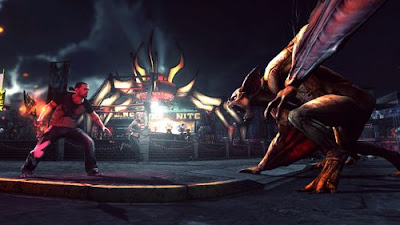 7. InFamous: Festival of Blood (PS3)
The InFamous franchise is my other annual gaming tradition, but it’s their own fault for being so damn fun that even their DLC can stand proud. In this Halloweeny, tongue-in-cheeky tale, Fake New Orleans is in the midst of celebrating Fake Mardi Gras and Cole McGrath receives an unexpected new “superpower” when he’s turned into a vampire. Forget moral choices; the hapless citizenry are Cole’s screaming, flailing juice bar as he battles his fellow vamps all through the night. It’s the gameplay we know and love, filtered through the lens of cheesy horror movies to ridiculous effect. As DLC goes, it’s not the best -- the campaign is horribly short (they bet everything on user-generated missions, damn them) and the final “boss battle” consists of Cole getting dogpiled by unfair waves of enemies. But it’s InFamous. And if Sucker Punch ever makes an InFamous game that I don’t love, I’ll know it’s time to quit gaming and become a monk in the Andes or something. 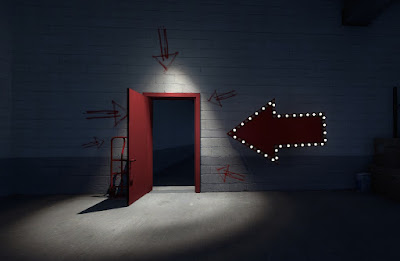 6. The Stanley Parable (PC/Mac)
Despite its solid rep, I was not initially taken with The Stanley Parable. But, then, I’d started out with the most obvious path, the one where Stanley discovers a sinister thought experiment beneath his office building. And that’s all I’m gonna spoil about this game -- everyone should have the chance to delve into its rich, tiramisu-like layers, uncovering one new secret after another. A game in which you play a drab office drone who challenges the status quo, a game in which the wry British narrator is your conscience, your BFF, your devil’s advocate, and your nemesis, all at once -- I never thought crushing existentialism could be so hilarious. The Stanley Parable is almost more of a visual novel than a game, but the more directions you wander, the more ways you find to warp and subvert the narrative, the more you’ll laugh your ass off and then ponder the meaning of life itself. Don’t be a Stanley who hunches over a gray desk from now until death. Be a Stanley who chooses the wrong hallway, pushes the glowing red button, ignores the narrator’s fretful mewling. Be a Stanley who plays games like this one. 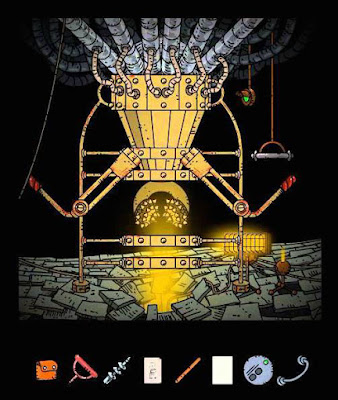 5. Submachine 10: The Exit (Free Online)
Just in time for Christmas, Mateusz Skutnik released the final(?) entry in his amazing Submachine series. What a journey it’s been! And what a note to end on! Since my original blog post, I still couldn’t quite tell you what the Submachine is or how it operates, but the tenth foray into its endless, crumbling expanse is a visual joy, mysterious and creepy and utterly unique. The Exit is fucking MASSIVE compared to its predecessors; not only must you click through a new series of mythic environments, you get to revisit every damn game in the series, which is exactly what I hoped the finale would accomplish. I’m going to miss it: the melancholy colors, the steampunk- and archaeology-inspired realms, the mechanical ka-chunk as you glide from screen to screen. But I’m in no hurry. Hell, I haven’t even finished The Exit yet. I’m not ready to let go of this series. It’s too cool. An absolute treasure and a rallying cry for creativity in gaming. I know there’s more to come...there’s always more. The Submachine never ends. 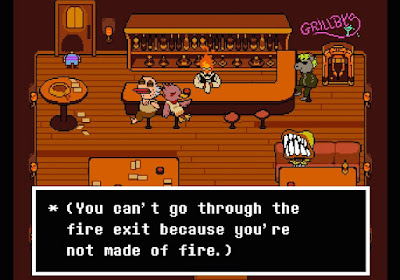 4. Undertale (PC/Mac)
Gamefaqs just did a tournament where voters could choose the best game ever. Ocarina of Time placed second. Undertale won. Which amuses me, because I can just hear the outraged screams of every gamer over the age of thirty. But it just goes to show how Undertale quietly grabbed hold of our zeitgeist this year. It’s another game that seems simple on the surface (basically one man’s love letter to Earthbound), but the more you play, the more you’re astonished. What Undertale does better than any game I’ve ever played is moral choice. The unique and ever-surprising combat system, in which you must bullet-hell your way through your foes’ attacks, allows you to beat the entire game without killing a single being -- and, believe me, every “enemy” you face has a voice, a personality, a soul. Games like InFamous or Dishonored may chastise you for killing, but Undertale will make you feel utterly, wretchedly bad about it -- and each alternate ending, depending on your level of brutality, has unexpected weight and pathos. For all that, the game’s world is vibrant and delightful, full of little details and memorable moments. Is this the best game ever? Probably not. But it stands among the best; just ask its fans, who voted out of love. 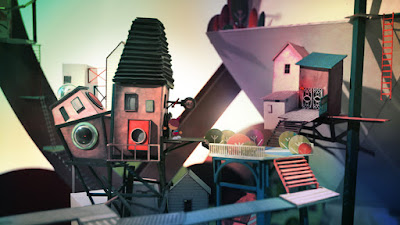 3. Lumino City (PC/Mac/iOS)
My admiration for a game is often proportional to the effort poured into it, hence my contempt for lazy 8-bit copycats farted out by delusional college students. They should do what developer State of Play did: Lumino City, the niftiest puzzle game I’ve encountered in awhile. You see, these guys didn’t program their gameworld into being, they fucking built it with their bare hands, crafting a miniature metropolis from paper, cardboard, and Radio Shack gizmos, then adding animated characters. As a result, Lumino City achieves a very distinct tangibility, a quirky realness that makes its precarious cliffside dwellings, skewed angles, and Rube Goldberg engineering feel more like an actual location than anything rendered on computers. The young heroine must track down her wayward grandfather and, along the way, solve the city’s energy crisis. Lumino City has a statement to make about our passive dependence on obsolete fuel technology, but it’s presented with such clever puzzles and artistic flair that it might actually win people over. Teach this in schools! It deserves more than just critical praise; it deserves social relevancy. 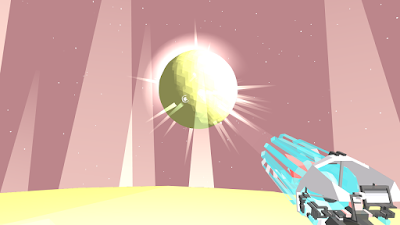 2. MirrorMoon EP (PC/Mac)
My runner-up is a hipster game with a hipster title, for hipsters who sneer at any game that’s not hipster enough. Well, hell, if I shunned pretentious games, these lists would be way shorter. MirrorMoon EP is an MMOG, sort of, in which you glide through the cosmos and visit procedurally generated planets, sans any kind of real goal. With origami graphics and a scant color palette, it casts a hypnotic spell. And it’s anchored by a slick idea: each planet has a moon, and the moon mirrors its planet (get it?) like an interactive mini-map. You wield a device with which you can move the moon, rotate it, or cause solar eclipses, affecting the very ground beneath your feet. Although the gameplay is repetitive (warp to a planet, visit its landmarks, lather, rinse, repeat), it’s the kind of repetition that can eat up an entire afternoon, because playing is meditative. It’s a mellow, sleepy, yet addictive experience, a game you can pick up over and over. New starmaps are routinely added, and when you visit a brand-new planet, you can name it. I guess this particular hipster experiment succeeded; I love MirrorMoon EP for its possibilities. When No Man’s Sky comes out, I can say I played this type of game way before it was cool. 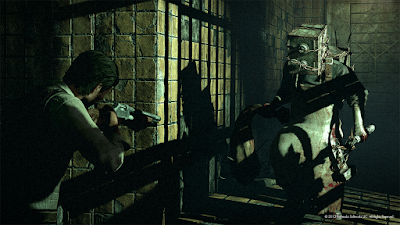 1. The Evil Within (Multi-Platform)
Fuck, I’m even more embarrassed by my top pick. All year, I waited patiently for a game more enjoyable than The Evil Within. Nada. So here it is. Yes, parts of it made me fling the controller, and its philosophy on the horror genre (include ALL the cliches!) was kind of pitiable. There are the slowly-advancing undead hordes, and the offal-smeared linoleum, and there’s the bulky fellow with a polyhedron for a head. This game tried way, way too hard...but somehow, for me, it still succeeded. I had so much fun with it. As Detective Sebastian Castellanos bulldozed his way through crypts, caverns, hospitals, and an earthquake-stricken Raccoon City knockoff, chasing a plot that a drunken chimp might have kabanged out on a rusty typewriter, I measured the game by how often I had a big grin on my face. Pretty damn often. I witnessed the entire history of horror gaming in one delirious package, and if it felt incomplete, guess what: the DLC is excellent, filling in much of the backstory and providing all the weapons-free, stealth-based tension the main game lacked. There is nothing perfect or refined about The Evil Within, but its sheer earnestness, coupled with the cathartic pleasure of sending an explosive crossbow bolt into a two-headed, acid-spewing mutant’s uvula, kept me playing in an orgasmic haze. It wasn’t a scary game, but it was awwwwwesome. If I won your respect with the rest of this list only to lose it with my favorite game of 2015, so sorry. Boo hoo. World’s tiniest violin. I gotta be me: the doofus who never knows what game is going to steal his affections next. See you in a year.
Posted by Dang-Blasted at 7:52 PM