2015 was quite the year for music! Adele thundered back. Taylor Swift pretended to care about her fans. “Hotline Bling” got stuck in my head. And not even the whole song; just the eponymous couplet. Ugh. If we zoom in on my personal musical odyssey of the past twelve months, we find it skirts the edge of mainstream and sometimes skids off into the great blue yonder. Take a look. 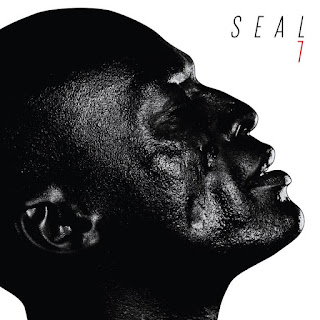 9. Seal, 7
This past year saw an interesting mini-trend: venerable musicians of a certain age releasing mid-life breakup albums. But is 7 really a breakup album? It’s clear Seal used songwriting as therapy following the derailment of his fairytale marriage to Heidi Klum (which, I gotta say, oozed cloyingly into his last couple albums). Luckily, Seal’s heart and soul -- and voice -- transcend us mortals, and the overall tone of 7 is cathartic rather than mopey. He draws upon his entire career and takes inspiration from his early, club-friendly work, blending it with modern pop and R&B savor. This does make 7 a wee bit too disco-flavored here and there, but most of the album is a home run, quivering with complex emotions. We may not know if he’s singing about his breakup with Klum or not (though it’s pretty obvious that “The Big Love Has Died” is autobiographical) but what matters is that he’s singing from deep recesses, pouring himself out and finding peace. 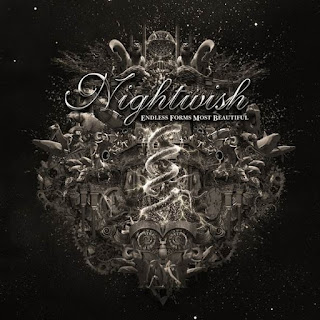 8. Nightwish, Endless Forms Most Beautiful
Here was my most hotly anticipated album of 2015. The fact that it let me down doesn’t make it unworthy or lacking in quality. It’s just...Nightwish’s last album, Imaginaerum, set the bar outrageously high. Armed with a new female vocalist, Floor Jansen, and with bagpiper Troy Donockley joining the group full-time, my favorite epic metal act has proceeded to......play it utterly safe. Oh, believe me, Endless Forms is almost desperately high-concept, with Richard Dawkins guest-lecturing and quite the gamut of song topics. (Darwin! Thoreau! Fantasy gypsies! This lady!) It’d suffer less if it didn’t have to follow the triumph of Imaginaerum, and that’s why it’s only at number eight. But, ya know? It rocks my world anyway. Jansen is a great pick for vocals; not only can she blast the roof off, she’s more versatile than her predecessors and always looks like she can’t believe how awesome her job is. If this album was a test run for “Nightwish ver. 3.0,” I can’t wait for the full product launch! 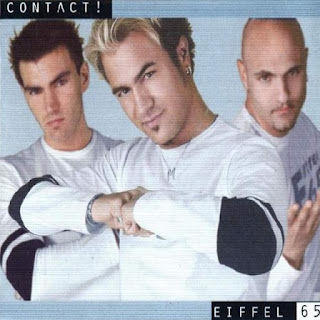 7. Eiffel 65, Contact!
No, you’re not hallucinating. It’s that Eiffel 65. The Italian guys who did “Blue (Da Ba Dee)” and drove us all insane back in the late 90s. Confession: I always liked their sound, and their 2001 sophomore album, which barely registered in the US, is a happy endorphin rush if you’re shamefully into this particular style of Eurodance. I’m not going to make any arguments in favor of Eiffel 65, but for me, Contact! provides a parade of electronic, sugar-coated anthems to which I can dance when no one’s looking. If you grooved to Europop back in middle school, well, this is more of the same. More quirky beats, more sideways English, more blissfully stupid lyrics (“I live my life like a vampire sucking music”), and way, way more nostalgia. Remember: contemporary pop music will always be called crap by hipsters, no matter what year it is. So check your cynicism and join me in bouncing around to Eiffel 65. If only to get “Hotline Bling” out of your head. Fucking Drake... 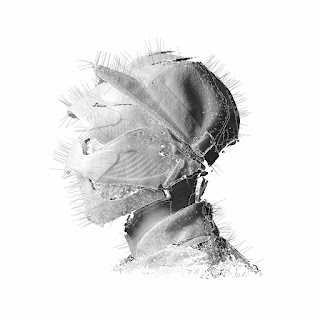 6. Woodkid, The Golden Age
The Golden Age was my big discovery of 2015, and is also the single weirdest album I’ve listened to in a long time. What to say? Woodkid. Real name: Yoann Lemoine. French videographer and music video director, rocker of a gnarly beard, who decided to compose an album somewhere between allegory and memoir, in the musical genre of...uh...Jesus, to call it “Alternative” seems like an act of cowardice. It’s grand and cerebral, an ambitious clash of orchestrations -- strings, tribal drums, furious horns -- barely tethered by Lemoine’s plaintive, heavily-accented warbling. Vocals may not be his strong suit, but composition definitely is, and even if it’s impossible to figure out what The Golden Age is trying to say (loss of childhood innocence? Romance is bullshit? Romance is everything? Beards are cool?), this is not an album that leaves your mind in a hurry. Haunting, portentous, and emotionally titanic, it makes me wonder if Woodkid has more up his sleeve, and if we should be bracing ourselves for his next symphonic atom bomb. 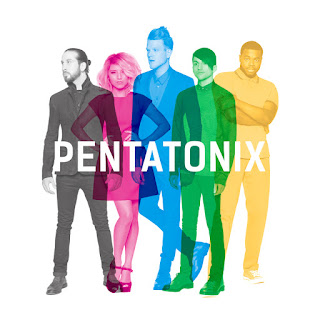 5. Pentatonix, Pentatonix
I love Pentatonix. You love Pentatonix. But are they more than a YouTube novelty? Yes, they’ve helped lead the new wave of talented young e-celebrities, but they cover more songs than they write. No more! Their first full-length album contains mostly original material, and is so gosh-darned bright and joyful that it’d melt the heart of any Scrooge. Oh, but it’s in no way juvenile; this a capella quintet has allowed its distinct sound to mature and evolve. Avi Kaplan, Scott Hoying, Kevin Olusola, Kirstie Maldonado, and Mitch Grassi are a single, well-oiled unit that eschews any one style. Yeah, the album is mostly pop-flavored (and, if I’m honest, leans a little too heavily on Hoying’s boy-band whine), but it also taps into R&B, soul, gospel, 50s doo-wop -- hell, it even ends on a beautiful lullaby. Don’t call these kids imitators just because they do a lot of covers (especially if their covers are as gorgeous as this one). There’s no one quite like Pentatonix and they love their songcraft. They’re ready to join the big leagues. 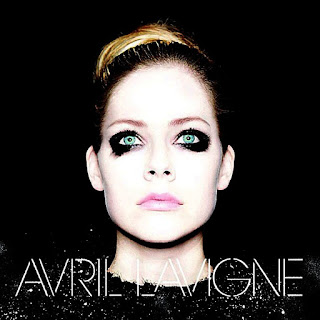 4. Avril Lavigne, Avril Lavigne
The weirdly ageless Avril Lavigne has no lack of haters, and it’s fascinating to me how she dons and then sheds one persona after another. Is she trying to find the real Avril, or is she just desperate to suckle at the latest trends? With her fifth release, it’s like she gave a rebel yell and decided to no longer give a shit, and the result is the most balls-out fun album she’s ever done. It starts with a bang and never really comes down from that high; it’s all giddy momentum, even if it’s all over the place. She plays up her girlishness but also gives us the knowing wink of a mature woman. From the Peter Pan defiance of songs like “Here’s to Never Growing Up,” to the smoky melancholy of “Give You What You Like” and the sweet vulnerability of “Falling Fast,” to whatever the almighty fuck “Hello Kitty” is supposed to be, Avril is dancing out of her twenties and into some sort of strange, snarky goddess-state. I’m down with that, because I loved the shit out of this album. Even the Chad Kroeger cameo. 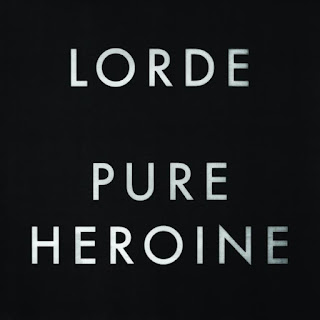 3. Lorde, Pure Heroine
Okay, okay, but we all know who’s hip, right? I may be late to Lorde’s party, but once I actually decided to see what besides “Royals” she has to offer, I was quite entranced. It’s not just how she molds pop elements into something wholly her own. It’s not just her lyrics, with their superior vocabulary, deconstruction of teen angst, and bodily preoccupation (drinking game: knock it back every time Lorde mentions teeth). It’s the voice. That throaty, parched drawl, the way she rolls the lyrics around to achieve maximum flavor before letting each syllable glide off her lower lip. Lorde has the voice of one much older and wiser, but that’s a wonderful thing, because imagine the evocative songbook she has yet to write! Her poetic teenage ramblings may be the prologue, but they’re never going to become dated, either. They’ll keep speaking to music lovers young and old -- anyone who craves a different kind of buzz. 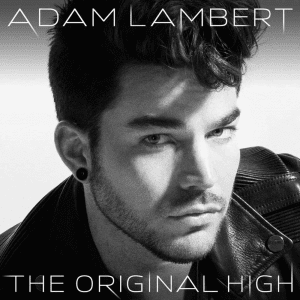 2. Adam Lambert, The Original High
While we weren’t looking, Adam Lambert wove himself a sequined cocoon and emerged as something unexpected: no longer just a glam, fabulous party boy, but a fashionably gaunt, brooding outlaw of spectacular pop glory. Or so his third album would imply. I knew it’d be great, but the minute I first heard “Ghost Town,” its bluesy acoustic strum giving way to eerie synth echoes, I understood: The Original High marks the end of the Adam Lambert I knew. Oh, is it glorious. He hasn’t lost touch with his flashy side, but he’s found a richer and more adult sound overall, helped by his recent symbiosis with Queen. Pretty much every track on this album is amazing in one way or another. Lambert’s rockstar howl has never sounded more sincere, and his evocation of pop music’s glory days has never been more relevant. He’s making real music without any agenda beyond blowing our minds. This was the album I enjoyed most in 2015. So why isn’t it number one...? 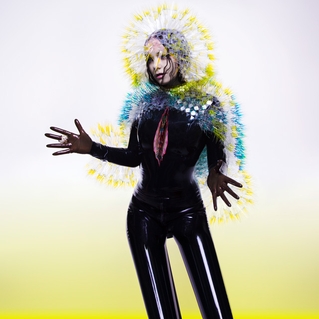 1. Björk, Vulnicura
Because there’s more to music than pleasure. If it evokes raw emotions from the listener, it will have better staying power. I can’t believe what Björk just recorded. This is the mid-life breakup album to end them all. It’s raw, it’s hurtful, it will make you feel like shit, then patch things up and soothe your ache. Björk has always been powerful, but her last couple albums were complacent -- slick and gimmicky with no new emotions to unpack. Then came her breakup with artist Matthew Barney, which fuels the chronology of Vulnicura, beginning with unease and tentative optimism, then spiraling into shock, despair, and rock-bottom surrender. The album’s keystone, “Black Lake,” is ten minutes of beautiful, beautiful misery, as igneous drums and endless, keening strings frame Björk’s rising tirade of righteous bitterness. Make it through the abyss and you can let your muscles relax as the album’s second half chronicles the process of closing wounds and carrying on, one step at a time. Björk is fifty years old, her musical career has spanned universes, but it took bare heartbreak to ignite a flame and produce some of her very best work. I did not “enjoy” Vulnicura, but it touched me to the very core like few albums have ever done. It deserves far more praise than I can give it here.
Posted by Dang-Blasted at 8:35 PM