Man...when I was a kid, I read books like some people inhale and exhale. And not just Goosebumps and junk; I tackled Upton Sinclair’s The Jungle at age fourteen, like a boss. These days, I still read lots of books, but never quite as many as I’d like. Being an adult with a job and multiple interests and published short stories and all. Sigh.

But here are the most enjoyable books I did read in 2015. I’ve realized that these best-of lists are not based on number of entries, but on whether a book (game, album, etc.) took me to that certain special zone of happiness. In the case of books, the big question is, did I want to read them again someday? I could have lengthened this list with Stephen King’s The Stand, which I liked a lot, but I can’t quite say it captured me like the following seven titles did. And seven is a highly appropriate number, as you’ll see... 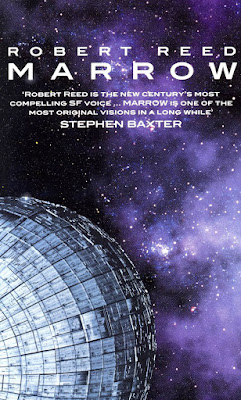 7. Marrow by Robert Reed
Sci-fi dominates this list. And none of the sci-fi I read this year was quite as wonderfully mind-exploding as Marrow. I tip my hat to authors who exceed the farthest reaches of what might be possible. Marrow begins with our discovery of a space vessel, bigger than Jupiter and immeasurably ancient, drifting through the cosmos. Its builders are long-gone, its destination unknown. On the principle of “Why the hell not?” we commandeer the ship and sell passage to whatever alien species want to hop aboard for the cruise to end all cruises. By the time the main narrative kicks in, the humans aboard the worldship are so advanced as to be essentially immortal. An entire functioning planet is discovered at the ship’s core. There is a sinister conspiracy that lasts millennia, an adventure that stretches across generations. What Reed does best is dream up a future where the human lifespan is so long that time itself barely has any meaning. Where “history” no longer exists because everyone has lived it. Thinking outside the box? THERE IS NO BOX. And novels like Marrow show us how limitless the imagination may find itself. 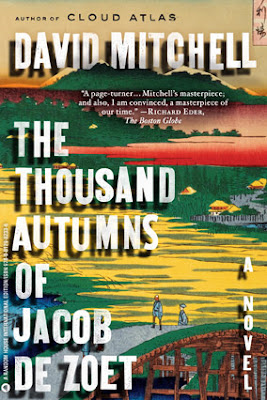 6. The Thousand Autumns of Jacob de Zoet by David Mitchell
I’ve been on a David Mitchell kick that will continue into 2016. While The Bone Clocks was awesome, it felt mired within his personal comfort zone. I hope he writes more stuff like The Thousand Autumns, which eschews his usual genre-hopping style in favor of thrilling, grimy historical fiction. Jacob de Zoet is a morally upright clerk plopped down in the snake’s den of a Dutch East India Company outpost clinging to the edge of Nagasaki like an engorged tick. De Zoet soon finds that nice guys finish last, that only the biggest bastards walk away with their fortunes made and their flesh intact, and that when you’re trying to be faithful to a girl back home, it is a spectacularly bad idea to fall in love with a scarred Japanese midwife who is herself coveted by an insidious shogun. The book would be fine enough if it were merely Jacob’s tale, but it keeps shifting perspective when you least expect it, giving us many vibrant points of view as its cast of dreamers and schemers stagger toward a conclusion where nobody may be left in one piece. Who says history is boring? In Mitchell’s hands, it’s an ill-mannered and playful-minded tour de force. 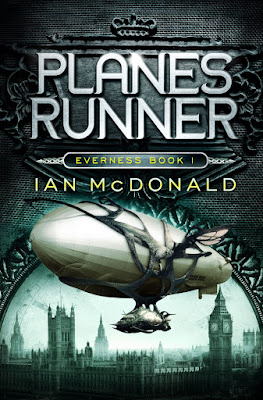 5. Planesrunner by Ian McDonald
Ian McDonald is quite possibly my favorite author ever, but not every author can pull off the transition to the seductive YA market. McDonald can; his criminally obscure YA trilogy is creative, thrilling, whip-smart, and never panders. Our hero isn’t the Chosen One for once; he’s Everett Singh, a London teen who comes to possess an app that acts like a GPS for an infinite number of parallel universes. McDonald’s knack for the baroque comes into play when bad guys chase Everett into an alt-verse powered by electricity instead of oil. It’s all the airships we could wish for, but it also demonstrates the sheer fun of imagining sideways Earths. The narrative is crammed with hip little details (Everett wins a spot on an airship’s crew via his mad Indian cooking skills), the stakes are high, the characters are delightful...and, hey, for once a YA hero isn’t white! Progress! I can’t wait to read the two sequels. In a perfect world, this would be the next Hunger Games. Maybe it can have a belated success? Anyone? 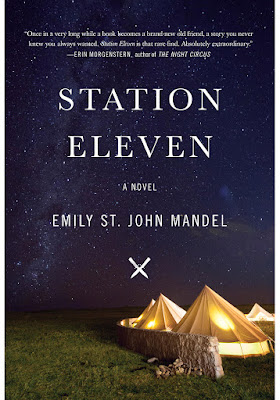 4. Station Eleven by Emily St. John Mandel
Bookworms will know this one. It got great reviews. Here’s another. Short, lovely, and profound, it rises high above its premise. Apocalypse tales are very vogue right now, but St. John Mandel’s global disaster (a flu pandemic) is so much more. Hopping around in time, she examines the hyperlinked lives of those before, during, and after the terrible event -- a venerable actor who dies onstage, an old-school theatrical troupe roaming the ruins of America, a community of travelers destined never to leave the airport, and others. Her chronology is spiritual rather than temporal, showing how, in the midst of massive upheaval, small events touch people, planting seeds which are carried for years, maybe lifetimes, until they find a place to take root. There is so much light in this particular apocalypse; despite its dark moments, the underlying tone is deeply optimistic. Base survival is not enough, this story argues. In order to exist, we as a species need beauty. We need joy. Rejoice, for we will always, always conjure it. I agree. 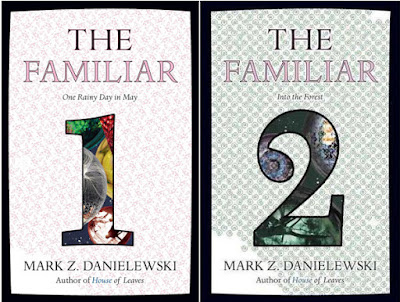 3. The Familiar (vol. 1 and 2) by Mark Z. Danielewski
Danielewski is not for the faint of heart. The House of Leaves scribe hasn’t become the cultiest of modern authors by following rules, and now he’s booted the rulebook all the way to Pluto. 2015 brought the first two volumes of his...let’s just call it a “project”...which I’m not even gonna try to describe. I mean, the plot is all well and good -- eccentric young girl rescues kitten; kitten is more than it seems -- but simmering beneath is something massive, strange, confusing, and glorious. Let’s just say that The Familiar contains nine POV characters, that each volume stretches past 800 pages, that Danielewski morphs and molds the printed word like a mad trickster god, daunting us with an Escher-maze of divergent fonts, color tags, nested parentheses, dialects, untranslated Cantonese, HTML, and a trio of metaphysical entities who drift through the narrative like sentient annotations. Also, the finished project will consist of twenty-seven fucking volumes. The audacity terrifies me...and yet, under all his tricks and gimmicks, Danielewski is a red-blooded writer whose breathless, intensely modern prose keeps you in its grip. I’m hooked. I’m onboard. I’ll be there when The Familiar finishes up in the late 2020s or thereabouts. Let’s watch fiction be redefined. 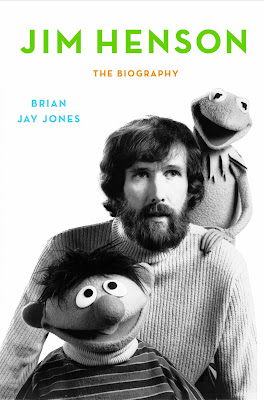 2. Jim Henson: The Biography by Brian Jay Jones
I love the Muppets, but my knowledge of their bearded creator was always superficial. After reading this biography, I’ve learned oodles about Jim Henson, yet he remains an enigma...as, perhaps, he should be. Providing a blow-by-blow account of Henson’s career, the book overcomes a slow start (did we really need his grandparents’ backstories?) and rockets into high gear once Henson and his googly-eyed, fuzzy-faced characters conquer television. What a fascinating man of contradictions he was: naive but always ahead of his time; a hippie who disdained worldly possessions and a Gatsby-style hedonist; a devoted father who became weirdly, almost cruelly detached from his wife. He not only rescued the dying art of puppetry, but dragged it, flailing like Kermit, into the modern age. He accomplished more in his lifetime than ten ordinary men, but it wasn’t enough, and the headlong pace of the book leads to the gut-punch of Henson’s abrupt, pitiable death at age 53. The sheer unfairness of his end had me biting back angry tears, but his legacy remains intact, and you won’t find a better retelling. An epitaph for one of the greatest visionaries ever to love life. 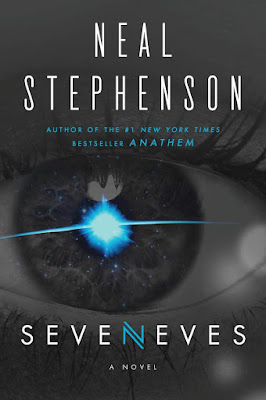 1. Seveneves by Neal Stephenson
Last year, Reamde entertained the shit out of me. This year, Seveneves brought me to rapture. Neal Stephenson’s dive into nuts-n-bolts science fiction is everything I could have hoped for and more. It’s the end of the world again: the moon explodes, giving humanity scant time to prepare before trillions of falling fragments turn Earth into a lifeless lump of magma. The only option is to modify the ISS into a long-term habitat -- a zero-gravity archipelago that will house whoever remains of us. Stephenson cleverly imagines how near-future technology might allow for our relocation into orbit, and focuses in on the women who will bear us up from extinction (hint: read the title carefully). As if that weren’t enough, the final third of the book is a leap forward into the far, far future, to see how we evolved, and how we reclaimed our ruined planet. This (literal) world-building offers one speculative fascination after another. It’s an amazing book, heavily technical but never dull, rife with surprises. I demand a sequel. Neal Stephenson has proven that he can do anything, as far as I’m concerned. And he’s just one of the talented authors who push fictional boundaries further and further. Long may they weave ideas.
Posted by Dang-Blasted at 10:17 AM