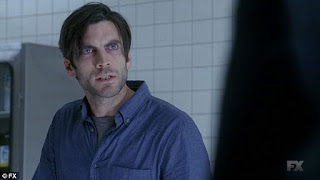 --So sayeth Sally, as well as most of us out there in TV Land. I’m thankful to this ep for wasting no time. We pick up where we left off: Wren the vampire girl, road pizza’d before Lowe’s bleary eyes. Lowe staggers into the Hotel Cortez, demanding ANSWERS, DAMMIT. Doing his Dark Knight Rises impression: WHURR’S TH’ KILLURRR?! Sally and Liz Taylor sigh, because they’ve been through this bullshit before. Sally takes Lowe to good old Room 64 and points him toward a secret chamber behind the armoire. Ten bell jars, seven of which contain grisly trophies of flesh and bone. As Lowe’s memories come flooding back, we get the classic montage-o-revelation. A round of applause for John Lowe, Ten Commandants Killer and clueless drip extraordinaire.

--I can be mean. The ep felt weak to me, because A) I have no problem with a flashback-filled episode focusing on a single character, but two in a row makes me fidgety, and B) I never thought the TCK subplot was super amazing. Maybe if the killer’s identity had remained a mystery. But many of us guessed it was Lowe early on, and everyone else must have realized before this week. Still, it was handled okay. Over Wren’s cold corpse in the morgue, Lowe poured out his sins, or perceived lack thereof, to his faithful buddy, Detective Hahn. The calm Morgan Freeman to his jittery Brad Pitt. See, Lowe’s a longtime patron of the Cortez. The staff all know him, even if he doesn’t always know them. Back in 2010, down and needing a martini, Lowe entered the Cortez and sealed his fate. Oddly enough, it was Donovan who brought Lowe into the presence of James March, smelling potential in him. Why Donovan? Does he have a hidden motive, or were the showrunners trying to atone for their criminal underuse of Matt Bomer’s cheekbones?

--March lit up like a jack-o-lantern when he perceived Lowe’s inky-black aura. He saw a man who could finally take up his mantle. March kickstarted the Ten Commandment killings, but only got two under his belt before his death. But Lowe? An officer of the law, filled with rage at all the little injustices he sees every day. Innocents who die at the flip of a cosmic coin. Vile human scum who float away scot-free on a cloud of red tape and compromise. If Lowe had his way, the scum would not get a token slap on the wrist, but Punishment with a capital P. March wormed this out of Lowe, and sealed the deal with a vile deed of his own: The Countess didn’t just abduct Holden because he was cute and platinum-blonde. March asked her to, in order to shove Lowe all the way over the brink. Five years passed, during which time March and Lowe talked and talked and talked, and drank and drank and drank...

--Countess costume commentary: Weird, I thought she owned the hotel. Judging by the outfit she wore during one scene, she is also employed as its bellhop.

--By 2015, Lowe had been well-marinated in a cocktail of booze, grief, fury, and self-righteousness, stirred constantly by March’s toffee-like voice. Can I just say again how much fun Evan Peters is having? Everybody wants to be the one cheerfully evil, irredeemable character. But not everybody can pull it off. Lowe also had Sally, who attached herself to him with sex and need. She could take his rage inside herself and leave him at peace, for a bit. A drug, sucking him in again and again. The lost souls of the Hotel Cortez turned Lowe into the perfect weapon. A collaboration, twisted and artful. In time, Lowe committed his first kill: the movie critic, worshipper of false idols, who was also a pedophile, just in case we felt any qualms with his getting an Oscar up the poop chute. Horrified by how much he relished killing, Lowe tried suicide, but March saved him. And we got an interesting tidbit: March and Sally have some sort of deal going, and if Sally doesn’t feed victims to that demon with the pointy strap-on, it will devour her instead. More, please?

--So that’s the big origin story. Lowe began carrying out his baroque murders. Sally assigned Wren to protect Lowe outside the hotel. And due to his shattered mental state, Lowe usually doesn’t remember what he’s doing, what he has become. No more! After hearing all this awfulness, Hahn still tried to be the good buddy and console Lowe. Alas for Hahn. Previously, when Alex came to him for comfort, he responded, and maybe they never had sex, but Hahn definitely got close. That was enough for Lowe. Thou Shalt Not Covet Thy Neighbor’s Wife. Lowe stabbed Hahn and took his penis (sufficiently mangled to slip past the censors) as trophy number eight. Rather chillingly, Lowe now seems happy. Or, at the very least, at peace with himself. The good man inside has died; the Ten Commandments Killer rules.

--Which is interesting, because we’re left without an everyman. A normal, sane character who can be our surrogate. Maybe that’s a good thing, because the audience stand-ins of the past (Kit from Asylum, Zoe from Coven, Bette and Dot from Freak Show) tend to get badly sidelined, unable to compete with the monsters, weirdos, and Angela Bassetts. Now Lowe is a willing monster himself. It’s gonna be interesting when I re-watch Hotel down the road, because I can study the first half of the season with new eyes, with the knowledge that all the hotel folk already know John Lowe as a kindred spirit, and are merely humoring his memory lapse. It was nicely executed, even if the twist surprised nobody.

--Thou Shalt Not Murder. Thou Shalt Have No Other Gods Before Me. Two more Commandments to go, and I’m interested to see what Lowe cooks up. Will he end the spree with his own death, in case we somehow missed all the allusions to Se7en? If so, let me get this out of the way now: