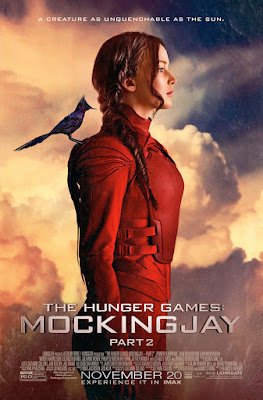 What follows is my final review of the Hunger Games franchise. If you need a refresher, why not revisit my posts on The Hunger Games, Catching Fire, and Mockingjay, pt. 1.

Thus another titanic film franchise draws, panting, to a close. And what a close. Four films might not seem as momentous as six films, or eight films. But those other guys seem determined to chug onward with their Silmarillions and their Fantastic Beasts, while I must believe that we really have seen the end of Katniss Everdeen and the war-ravaged dystopian playground of Panem. I’ve been waiting eagerly for this finale for two years, since the first half of Mockingjay had little to offer beyond an extra movie ticket lightening our wallets. All it could really do was lay down groundwork for the future-deciding war to come. Now that we’ve suffered through that gray, soupy cash grab, here’s Part Deux to explode our brains with tragedy, victory, special effects, and closure. About damn time!

Okay, where were we? Panem has gone to war. We have the decadent, clueless Capitol, under the thumb of the increasingly frail President Snow (Donald Sutherland). And we have the ragtag grassroots Districts, led by the not-exactly-benevolent President Coin (Julianne Moore). And we have Katniss (Jennifer Lawrence), who has been a powerful symbol of rebellion but is in danger of losing her relevance once the professional fighting begins. She’s not ready to lay down her bow, because Snow went and did something personal: he turned Peeta (Josh Hutcherson), the man Katniss sort of loves, into a brainwashed assassin who can’t look at Katniss without seeing slavering monster fangs and a big red sign saying, “MURDER ME NOW.” Katniss wants to see Snow’s defeat with her own eyes. She wants to cause it with her own hands. But first, there’s some loose ends to tie up. Sadly, the first half-hour of the film is basically Mockingjay, pt. 1.5, with even more somber war-room conversations and even more bombed-out concrete! Yay! 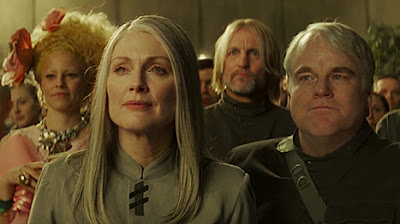 If you can sit through the extended prologue, you will be rewarded. Because Part Deux comes to life once Katniss hits the Capitol streets. She’s assigned to a military team that’s supposed to be shooting low-risk propaganda (ha ha, yeah right), and sees an opportunity to get close enough to Snow’s mansion to put an arrow in his crusty old eye socket. Her teammates include her saber-rattling secondary guy, Gale (Liam Hemsworth), brave merman Finnick (Sam Claflin), subtly subversive Commander Boggs (Mahershala Ali), and guerilla filmmaker Cressida (Natalie Dormer), plus a handful of soldiers and key grips and such. Also, Peeta, who is struggling to sift through the drug-induced sludge his mind has become. (This would have been more effective if Hutcherson didn’t seem like a puppydog even when he’s supposed to be an angry mutt.) Could Coin have stuck all these volatile folk together in the hopes they’d be killed? It won’t be the last dirty trick Coin pulls. As Katniss and co. scrambled through the rubble, as supporting characters croaked left and right from vicious booby traps, I breathed a sigh of relief. The story and environment got interesting again! I love how they showed us the gaudy, sparkly decadence of the Capitol all torn to hell; it made a great contrast.

Yes, the film builds awesome momentum with few missteps. Even the quiet scenes are generally effective; we need time to come down from our adrenaline rush, mourn the latest deaths, and discuss the stakes. In a kind of reverse Bechdel Test, Peeta and Gale are given a moment to talk honestly to each other about their feelings for Katniss. I’m glad they weren’t just whiny rivals, even if neither one really clicked as a solid character. Action-wise, the big show-stopper is a trip through the sewers and an attack by lizard-creatures. This sequence worked so well because it took the time to build quiet, dreadful suspense before exploding into ghastly action; it was like a deleted scene from Alien that suddenly turned into a deleted scene from Aliens. It’s one example of how brutal Part Deux can get. Yes, the violence is bloodless; we haven’t gotten any less PG-13 since the Tributes vaguely waved knives and spears at each other in the first film. But, man...you can’t slap a rating on grimness. One death involving black tar and razor wire is straight out of Silent Hill. The final action scene is not victorious, but achieves a downward spiral of sheer horror, and they did something from the book that I was sure they’d leave out. But they went there. The children and the silver parachutes. I’m kind of awed. 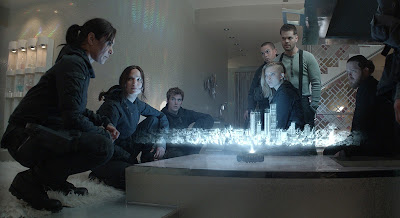 The thing you have to understand about the Hunger Games series is that it becomes a parade of terrible events, death, and war crimes, in which Katniss is reduced to a PTSD-ridden shell and must somehow start anew from the ashes. Jennifer Lawrence has made this franchise her own, and thanks to her face, her eyes, she’ll remain in our memories for a long time to come. The story doesn’t come down to Katniss and Peeta, or Katniss and Gale. It’s Katniss, Snow, and Coin. Sutherland plays Snow as a man who’s realized he’s going to lose, but wants to cause as much anguish as possible, simply out of toxic bitterness. Moore plays Coin with calm, snakey artifice. The scenes following the rebels’ victory are crucial, and the film nails them. What Katniss realizes about good and evil. Snow’s final speech to her. The council of the surviving Hunger Games victors, in which Katniss does entirely the wrong thing for entirely the right reason. And then a scene that I’ve been waiting for since the beginning. It’s where Katniss fires her final arrow -- the last one that matters, anyway. This scene is a keystone. In a sense, the entire franchise leads up to it. It was perfect. The timing, the use of silence and music, the reactions of each character. Perfect. It’s so good that the last few scenes barely register. But they’re still important in their own way. I think the ending does a good job of showing that some wounds never heal, but that it’s possible to live with pain, and live well.

So that’s Mockingjay, and that’s Katniss’s journey done. I think that, in the end, Catching Fire was the best film. I initially thought it was weaker than The Hunger Games, but I’ve changed my mind. Yes, the kid-on-kid violence was more powerful, but the sequel balanced all its themes with real flair. I will say, however, that some scenes in Mockingjay, pt. 2 rose above all the other films. If the finale had a flaw, it was mismanagement of its bloated cast. This is partly the book’s fault, but the movie had to abridge the book (though not as badly as I was expecting). Thus, everyone got shuffled around and some were shuffled out the door. Blink and you’ll miss Elizabeth Banks, Stanley Tucci, Jeffrey Wright, and Gwendoline Christie. Thank God, though, that they made extra room for Jena Malone, whose psychotic Johanna is the only person onscreen who can cut through all the bullshit better than Katniss. I wish we’d gotten a better depiction of Katniss’s sister, Prim; Willow Shields was okay but not great, and Prim’s overall symbolic significance was definitely lacking. Still, pretty much everyone (beyond the two love interests) did a very good job, and the film acknowledged them when it could. Elizabeth Banks’ Effie and Phillip Seymour Hoffman’s Plutarch may have been scarce, but the final close-up of each one was spot-on. Woody Harrelson’s Haymitch got some great closing material. Sutherland’s take on Snow was nothing like I’d always pictured from the books, but he turned out to be just right; I prefer a smiling, smooth-voiced villain to a slavering creep. 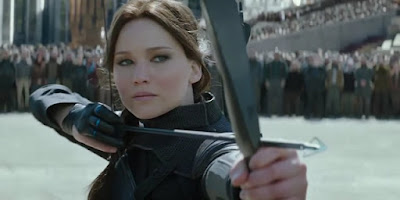 All well and good, but it’s hard to call these films an ensemble when so much is on the shoulders of Jennifer Lawrence. She was amazing from start to finish. The books are Katniss’s inner monologue, and Lawrence is able to convey it with a simple gesture, a flick of her eyes. She’s the main reason I’ll return to the Hunger Games movies in the future. They took a strange, compelling, bleak trilogy and turned it into mature and artful blockbusters. They didn’t pander. Yeah, we could talk about how the story slams the cynical fetishizing of a young woman for marketing purposes, while the films’ marketing does exactly that. (That sexy, skintight red outfit Katniss wears on the posters? Completely absent from the film.) We could sigh at the movies for not pushing their topical themes even farther. Making people suffer for televised entertainment? The media mangling the facts? The upper class willfully ignoring those who labor to provide their stuff? Terrified refugees being shat on because of their origin? At least the movies show these issues. They’re trying to handle a very dark story in a way that still entertains. We can provide our own commentary. Mockingjay, pt. 2 is a solid and powerful finish to an exceptionally well-done franchise, and I don’t think it will become any less relevant. Because, as the far-future nightmare of Panem demonstrates, we’ll always live under the threat of repeating our mistakes. I hope we’ll keep that in mind as we move ever forward.

I hope the Katniss Everdeens of history are ready and waiting. 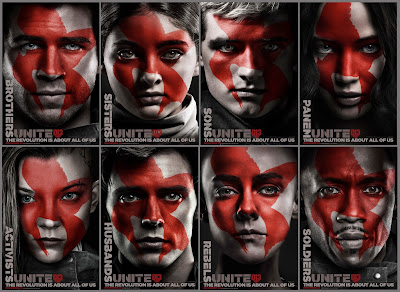