You know what really makes the Hunger Games films stand out from the pack of glossy big-screen YA spectacles? The suffering on everyone’s faces. The way the characters have to fight to keep their grief and rage from boiling to the surface. It elevates the material and makes these lovelorn sci-fi capers feel like high art next to the emotions conveyed by Twilight (“Romance is nice and my head is full of yarn”) and Harry Potter (“Golly gosh gee whiz, look at all the STUFF!”). Hell, that new Divergent thing (basically a Hunger Games knockoff with less poverty and more gun porn) looks okay, but the heroine appears to be stuck in permanent “adorable badass” mode. By contrast, the face of Katniss Everdeen is a wounded mask that repeatedly cracks wide open as she experiences more terror and pathos than any teen deserves. That is the selling point.

So the first Hunger Games movie was damn good (read my review here), and I was a tad concerned about the sequel because A) the second part of a trilogy is always tricky, B) the book has some problems, and C) wherefore art thou, Gary Ross? I’ve seen it, and my capsule review is: awesome sequel, great acting, doesn’t solve the book’s problems. But I guess that’s acceptable. Director Francis Lawrence lacks pedigree, but he does a fine job of making what is essentially a nuanced action flick with dramatic elements. I totally boogied to Ross’s stripped-down interpretation of the dystopian nation of Panem, but in retrospect, it might have been artsier than necessary. Lawrence’s sequel is more conventional and show-offy with little to no shaky-cam, which makes it both highly entertaining and a tiny bit less compelling. In no way does it dip below the quality line. But it does dip. 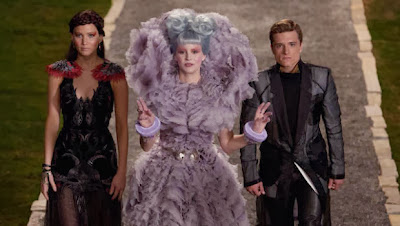 Catching Fire continues the adventures of the haunted Katniss (Jennifer Lawrence) whose victory in the televised bloodsport known as the Hunger Games was short-lived. Now she and fellow victor/fake boyfriend Peeta (Josh Hutcherson) are being paraded around Panem, the latest Justin and Miley to distract the oppressed masses from how godawful their lives are. Problem: Katniss and Peeta fucked with the game’s rules in order to win, and are now seen as icons of social rebellion. The placidly evil President Snow (Donald Sutherland) demands that Katniss toe the line and keep up the plastic smiles and smooches. Peeta really loves Katniss and is well aware that she does not love him back. Katniss’s childhood pal Gale (Liam Hemsworth) also loves Katniss but wants her to become a revolutionary figurehead. Katniss herself has no idea what she wants. But she has to decide soon, because the next Hunger Games are coming up, and because it’s the 75th anniversary of all this bullshit, Snow is planning to toss former victors back into the Arena to kill or be killed. And that very specifically includes our heroine.

That’s one of the book’s problems, actually: it removes the shock factor of children being forced to fight and murder each other. The sheer cruelty of the scenario is what lent the first book/film its edge. Catching Fire copies the structure, only now, Katniss and Peeta are up against a bunch of experienced adults, so there’s nothing to be appalled by. To be fair, the theme is now one of rebellion, and one point that’s effectively hammered home is how the players are all victims: they committed unspeakable acts against their will, they won the right to live in safety, and now it’s been stripped away and they’re all gonna die after all. This also benefits Katniss by giving her a ring of allies in the Arena. It’s fun to watch them work together, but it’s hard to feel like Katniss or Peeta are in much danger, despite an onslaught of computer-generated perils (the toxic fog is the only thing that succeeds in seeming lethal). As with the first film, the Games part isn’t quite as interesting as the pre-Games part. But the pre-Games part is one bleak, brutal image after another, and quite effective. 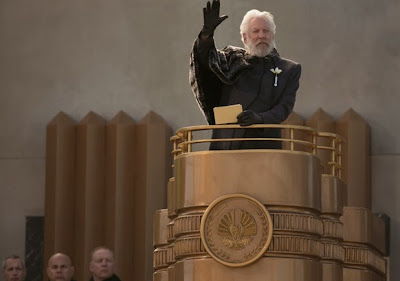 It’s all carried by the acting, and once again, Jennifer Lawrence rises far above the task. It’s painful to watch her attempting to smile and act like everything’s fine when the exact opposite is true. This time around, she has to be fraught and tearful more often, and it could become irritating in the hands of a lesser actress, but Lawrence’s raw emoting is never fake -- and the reward is the glint of joy in her eyes whenever she draws back her iconic bow. As the film progresses, she becomes more steely and resigned, and it’s actually kind of funny whenever Peeta or Gale try to make goo-goo eyes at her and she brushes them off because who the hell has time for that shit? While she slays the part, we get to watch the other actors chew on their own roles. Sutherland is insidious as Snow, Woody Harrelson remains an embittered blast as Haymitch, Stanley Tucci achieves new heights of camp as Caesar Flickerman, and Elizabeth Banks uncovers surprising depths to Effie Trinket (some of the most effective material involves Effie’s slow meltdown as she realizes what kind of evil she’s bought into). Standouts among the newcomers include Sam Claflin, way better than I expected as the dashing Finnick; Phillip Seymour Hoffman, all creepy ambiguity as gamemaker Plutarch Heavensbee; Jena Malone’s Johanna, pissed off in the best of ways; and Lynn Cohen, wordless and radiant as old Mags.

It’s not all awards-worthy, however. We still have the big problem that neither Peeta nor Gale are particularly interesting; the former retains his boy-next-door blandness while the latter can’t seem to win more than a few minutes of screen time. I do look forward to seeing Hutcherson tackle the final chapter, Mockingjay, when (spoiler alert) Peeta is largely stripped of his cuddliness, but he and Hemsworth had better smarten up if they want any remaining hope of being taken seriously as love rivals. Also, while I really like Lenny Kravitz’s depiction of Cinna, he seemed to phone it in this time around -- disappointing, given Cinna’s more poignant role here. Katniss’s enemies in the Arena remain undefined, destined to look scary and then die with hardly a shrug. And, most annoyingly, this movie has a Nasty Albino Orc Dude. Remember my review of the first Hobbit film, when I complained about the generic and two-dimensional Nasty Albino Orc Dude who was just there to ratchet up the action? Catching Fire gives us a brutal Capitol thug (Patrick St. Esprit) who wreaks havoc in District 12 for a few minutes before the plot hurries onward. Yeah, he was in the book, but the movie makes him so over-the-top vicious and evil that it clashes with the more plausible performances of everyone else. Sadism is more effective when cloaked in decency; that’s why President Snow works as a villain while Nasty Pale-Skinned Human Dude hurts the movie.

I spoke of the plot a moment ago, and that’d be my last issue. It’s a very long movie that still has to rush through various events. It does so effectively enough, but it leaves you frazzled, and story details become a tad murky here and there. Especially at the end. I’m not gonna spoil any specifics, but the original novel had a lame ending, and my hopes that the film would improve upon it were dashed. After a bunch of foreshadowing, the climax is rushed and confusing, the fates of a couple major characters occur offscreen, and Katniss ceases to be an active mover and shaker in events. A film should not end with the protagonist having a bunch of stuff explained to her. But it does. “Hey, Katniss, all these things happened while you were unconscious! TO BE CONTINUED.” This flaw is the book’s fault, but the movie could have expanded and shown us more of what all happened. These movies have been moving above and beyond Katniss’s POV. So why make the same mistake the book did and cap off with a lame cliffhanger?

The destination is frustrating but the journey was worthwhile. Catching Fire may not be as good as The Hunger Games, may trade in the horror of social injustice for cooler special effects, but it remains far superior than its YA franchise peers. And Jennifer Lawrence remains a powerhouse of defiance, vulnerability, and wounded stoicism. She makes the film, and the film makes me satisfied. At least until the two-part Mockingjay brings it all to a close. Spoiler alert: way more bad shit happens and way more people are miserable. Isn’t it exciting? 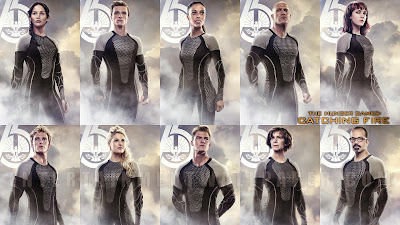