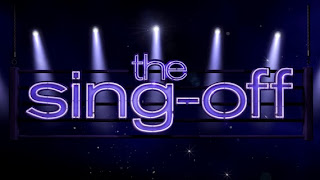 I generally find reality TV to be just about the worst thing ever. It’s vapid, it glorifies the worst aspects of humanity, it gives a lot of attention to species of people who do not deserve one picosecond of the fame and money they’re getting by mewling on camera. Reality competitions aren’t much better, because of the whole Simon Cowell/Gordon Ramsey effect where the bigger a dick you are, the more ratings you get. But. I am willing to concede that a reality competition can be good if lightning strikes the right chemicals and triggers the right alchemy. Case in point: I love The Sing-Off.

Don’t get me wrong, it’s cheesy as hell. All those neon lights, those matching costumes, that ridiculous milking of suspense and toying with the audience’s emotions. What makes The Sing-Off stand out is...well, I have to call it joy. The judges are joyous. The performers are joyous. The audience shares in the excitement of performing. And because it focuses on a capella groups, it’s not about showmanship so much as it is about the simple power of the human voice -- its nuances, the ways in which it can be a musical instrument of its own. That is so much more impressive and interesting than “Who’s the next generic pop star?” Now that The Sing-Off has been dusted off for a fourth season, I guess I should blog some about it.

I found out about this show by chance. See, my native stomping ground is near Dartmouth College and its male a capella group, The Dartmouth Aires, were competing in Season Three. Thanks to a weird sense of geographical loyalty, my mother and our friends and I followed most of the season breathlessly. It helped me get through having appendicitis. We were quite pleased that the Aires came in second place (didn’t hurt that they were so darned cute, charming and talented), and the grand prize winners, five-member electro/techno/space-age/pop group Pentatonix, are one of my favorite things on the internet right now. Seriously. Go watch every Pentatonix video on YouTube and tell me they aren’t fucking angels sent from heaven to make the word cooler. After that, it looked like the show’d been unofficially canceled, but now it’s back (there was some random movie that might have helped) with ten groups competing. Let’s break it down! 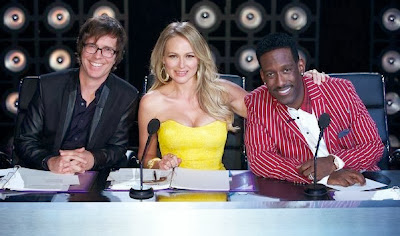 The show is hosted by Nick Lachey, a guy with quite a bit of baggage, but his goofy charm works pretty well in a competition where everyone seems to somehow get along and be rooting for each other. The judges are just so......nice. Shawn Stockman of Boyz II Men always has heartfelt words of praise, but can turn serious at a moment’s notice. Ben Folds is a total hipster but you gotta love him, especially when he’s the brunt of a ton of good-natured jokes. The new judge this season is Jewel, replacing sweetie-pie Sara Bareilles, who replaced dopey-ass Nicole Scherzinger. Jewel’s a good pick; though she sometimes tries too hard to be witty, I like her snark and she definitely knows the technical ups and downs of vocal performance. These three critique the ten groups and eliminate one each episode, as you’d expect, but, man, it just looks like so much fun is being had in the process. Even the losers tend to smile and cheer on their way out the door.

Okay, quick run-down of the groups and my personal feelings toward them.

The Princeton Footnotes
I’m putting these lads first because they were first to be eliminated...and, yeah, they kinda deserved it. A rather whitebread collegiate squad from Princeton, NJ, they were obviously going for the whole “lovable bros” thing perfected by the Dartmouth Aires last season. But the Aires had serious pipes whereas the Footnotes’ sound seemed generic to me. They didn’t stand out and came across as a tad smarmy, so I don’t miss them. 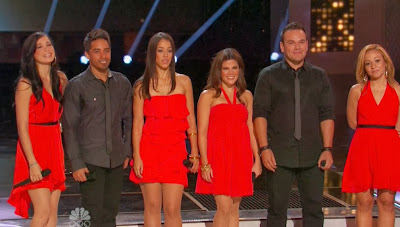 Calle Sol
Well, that was heartbreaking. Puerto Rico’s Calle Sol (four women, two men) mixed steamy Latin music with steamy Latin dancing, and they absolutely killed at it. I was rooting for them because A) they’re great to watch perform, and B) they have a sympathetic working-class persona. However, as the judges pointed out, it’s risky to be associated with only one flavor of music. The dancing hurt the singing and they were eliminated second. God...DAMMIT, I wanted them in longer. Sigh.

VoicePlay
Five dudes from Universal Studios in Orlando who later added one female vocalist. They’re alright. They sound a lot like Pentatonix (kooky and space-agey), which isn’t a bad thing, though I doubt the show will award top prize to the same genre twice in a row. The lady singer, Honey LaRochelle, has a breathy coo with a lot of personality. VoicePlay was in the bottom two during the first episode; bodes ill.

Home Free
Okay, I hate it when an act is billed as the “first-ever” something, because it never is. In this case, Home Free is the “first-ever country vocal band.” Bullshit. This is like Urban Method, the undeserving third-place winners from last season, who smugly acted like including a rapper in an a capella group was groundbreaking. Home Free have charm and an incredible bass singer, but I don’t give much of a shit about country music, so I’m biased against them.

Element
All-girl group from NYC. Ehhhh...this may sound sexist, but girl groups don’t always do it for me. They’re talented, to be sure, but they also come across as plasticky and craving attention. Victims, perhaps, of the stereotypes our society imposes upon aspiring young women. Well, one of them has lots of piercings and a Pepe le Pew hairdo, so maybe there’s hope. Still not really rooting for them. 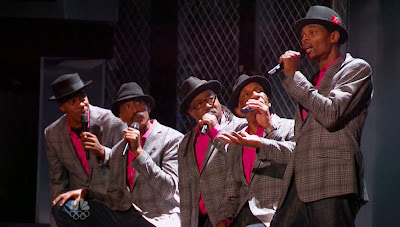 Street Corner Renaissance
I’m gonna embrace yet another stereotype and say that few things are classier than middle-aged black men who can croon. This is the oldest group on the show; they’ve been doo-wopping in Los Angeles forever, and as you can imagine, they are amazing. In a brilliant move, their premiere performance was a soulful cover of “What Makes You Beautiful” by One Direction. Yeah, you show those douchebag kids how it’s done! I’m a tad conflicted: you have to love these guys, but I worry they may win the show simply out of respect. Doesn’t seem quite fair. But I could be way off.

AcoUstiKats
Another all-male college group (University of Kentucky, in this case), but they are a much better surrogate for the Dartmouth Aires. They’re fun, breezy, very talented, and they jump all around the stage. In fact, their gyrations during the premiere bordered in inappropriate. Still, they succeeded where the Footnotes failed and overcame being in the bottom two during the second ep. Awful band name, though.

Ten
As the same implies, there’s ten of them. They’re all professional backup singers, based in Dallas, who decided to join forces and give The Sing-Off a shot. As a result, I don’t really like them. They’re good, but I’m always gonna root for the underdog, and a band of polished pros do not win my sympathy. They’ve already made it while some of these other groups are working their asses off to make it. And they too have an overly glossy veneer. Thumbs down for now.

The Filharmonic
These boys are freaking adorable. And I mean that in an utterly non-condescending way. Filipino-American lads from LA, they’ve embraced 90s boy band chic, only you can tell how much they love doing this and how thrilled they are to be here, so it’s utterly impossible not to root for them. As the token heartthrobs, they have a good shot at this, and I’d be more than happy with a Filharmonic victory. Although... 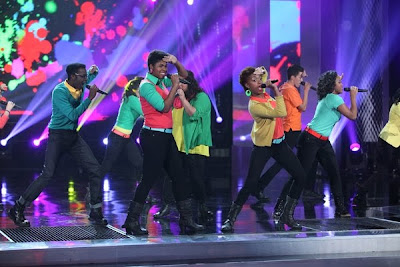 Vocal Rush
...this final group is the one I’m rooting for the most. The youngest of the batch, they’re highschoolers from Oakland and their toil and soul really shine through. Believe me, they’re professional-quality singers, but the fact that they’re still so raw, and come from a non-glamorous background, makes me think they deserve victory above all others. I like their spunk, their dance moves, their unabashed grins. I have my invisible little Vocal Rush pennant to wave while I watch the season. Go go go!

That’s the breakdown after two episodes. It’d be kinda redundant to do multiple posts on The Sing-Off, but I’ll definitely do one more after the season ends and I can sum up my feelings on the winners and overall performances. This should be a nice tidbit while I’m waiting for American Horror Story to come back. And everyone else should watch it too! Because that joy is real.
Posted by Dang-Blasted at 5:18 PM