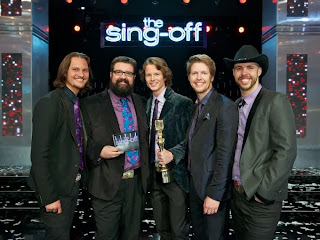 Aww. I feel a twinge of melancholy now that The Sing-Off is over. Well, okay, it’s Christmas and I can’t feel that sad. But seven episodes over less than three weeks seems like a tease. NBC could’ve spread them out more. Eh, well, each ep was still a blast. In a finale that surprised no one, country boys Home Free took home the grand prize, the soulful singers of Ten came in second, and high-school pack Vocal Rush took third. Based on the overall performance of the groups this season, this was the outcome I was predicting, even if my heart was rooting for it to be different. It’s a tribute to this show that I was never pissed off; even the groups I didn’t care for, I didn’t mind hearing sing. They all deserved kudos. I felt the love.

The finale took place amidst an assault of fake snow, giant novelty presents, and Christmas cheer that never quite became tacky. I mean, only someone like Shawn Stockman can mix crushed velvet with a violent paisley shirt and still look hip. It felt less like a stand-off between the top three groups and more like an overall celebration of everyone. All the eliminated contenders returned to help ring in the holidays, everyone was clapping and hugging and getting misty-eyed, and I fell right into the thick of it. The judges performed alongside the groups (Jewel and Home Free’s honey-smooth rendition of “Have Yourself a Merry Little Christmas” was the standout), 98 Degrees showed up so Nick Lachey could embarrass his fellow band members, Pat Benatar demonstrated that being a rock goddess is a lifelong privilege, and Pentatonix reminded us all how awesome they are in every way. Also, Lachey gave the other judges shirtless photos of himself. What a selfless guy. As for the top groups, let’s break it down. 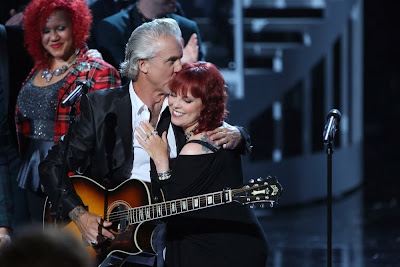 Home Free did win me over this season. Although their country vibe made me Grinch out early on, I could not withstand the onslaught of grassroots charm and genuinely skillful crooning. If they’d just been cowboys, that would have been one thing, but they never felt trapped in a rut. Plus, they had a chubby goofball with an epic beard. Everything is made better by a chubby goofball with an epic beard. Now, I do feel like they were the frontrunners from day one; the judges never had anything negative to say about them, and if I were a conspiracy nut, I might accuse the show’s advertising and format of subtly favoring Home Free the whole time. But that’s probably straitjacket-worthy talk, so I’ll just say that they owned it, I warmed to them hugely, and congrats.

(Hopefuls take note: no group with more than six members has ever won The Sing-Off, and this is the second season in a row where a quintet took top prize. Seems the judges prefer the strengths of individual voices over the “wall of sound” approach.)

Ten never did it for me. I found them...pushy? Maybe that’s the wrong word, but they were kinda in your face about the competition. Soul music is not really my cup of tea, though I recognize its power and emotion. Ten’s “gimmick” was that they’d never performed together before The Sing-Off. They did become a very tight-knit group, but are they in this as a group, or to boost their individual careers? They already exist in the music industry, which makes them seem a tad more cutthroat. No underdogs here. Again, I certainly didn’t hate them as people or performers, but I wish other groups had been rewarded for their promise and Ten hadn’t made it this far.

Vocal Rush remained my number one pick throughout, and a testament to believing in yourself, cheesy as that sounds. They wore their hearts on their sleeves at all times; it was heartwarming and made for some savage performances. They wanted to win so bad, and that want was right out there in the open. And I found them wonderfully diverse: they had the Whitney Houston type, the big girl with big pipes, the dude who could rap (not a fan, but points for variety), and the humble beatboxing girl who turned out to have a lovely, vulnerable lead vocal. And more. I knew they probably couldn’t beat Home Free or Ten, but it was still a victory -- until now, no high school group had made it past the first couple episodes, let alone cracked the top three. So you can take your condescension and shove it. 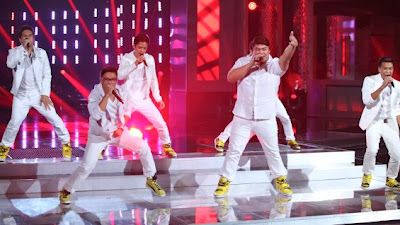 As for The Other Groups, well, they all stood out in their own way. I was happy that The Filharmonic got fourth place; what they lacked in adaptability they made up for in exuberance and dreaminess. It was surprising to see Street Corner Renaissance dropped from the show so quickly; I thought their venerable status would carry them through. The cynics cry, “They never had a chance because they weren’t young and sexy enough!” but I prefer to think they were just too classy for TV. So there. My biggest lump-in-the-throat is reserved for Calle Sol. Yeah, I know why they didn’t last: you just can’t walk into a singing competition and go, “Our thing is that we dance!” Still. In terms of background and motivation, Calle Sol really won me over. I’m getting a sense of what the judges must feel, the hardship of assessing the groups on a technical level while your heart is telling you to give them more of a chance. The fact that they feel so bad about the eliminations is part of what makes The Sing-Off work so well. It’s about supporting aspiring performers instead of shooting them down. Bottom line, all the groups did great. Some didn’t connect with me, but then, music is sooooooooo subjective. Everyone can find something to groove to.

If I may use a pun that Nick Lachey would approve of...guys, The Sing-Off just hits all the right notes with me. If I root for the underdog, well, this show is the underdog of reality talent competitions, and its offbeat delights can’t be matched. It shows us the real performers, not just the masks they hide behind. Their voices, unmuddied by instruments or programming, tell us the story of where they’ve been and where they’re going. They hold each other up, they support each of the judges’ decisions, and they laugh and have fun. This show is hilarious a lot of the time, and really sad at other times, and has its share of wow moments. Moments like the judges’ delighted WTF faces when Tim Foust of Home Free somehow hit a low F-sharp during “Ring of Fire.” Or Filharmonic’s Joe Caigoy crying sweet man tears after a performance, just because. Or the running gag about Ben Folds’ borderline-creepy crush on Lachey; I dunno where the hell that came from, but I’m so glad they ran with it.

Now, the show couldn’t quite escape from the overly staged nature of reality TV. When one of the AcoUstiKats guys proposed to his girlfriend onstage, it was very cute, but also an obvious stunt (no WAY were the judges sending the group home that night). I got annoyed by the groups’ fake surprise at being mentored by the judges: “We were just innocently rehearsing when Jewel walked in! Minds blown!” Yeah, and there just happened to be multiple cameras present to catch this “spontaneous” moment. And then there were the Ultimate Sing-Offs, a new feature this season in which the bottom two groups of each ep performed the same song simultaneously, trying to avoid elimination. This gave us some of the season’s strongest performances (Vocal Rush’s take on Destiny’s Child’s “Survivor” blew the roof off), and I liked that it was more about the groups working together than trying to drown each other out, but come on...the group with the weakest solo performance of the night went home each time, regardless of how they did in the Ultimate Sing-Off. Was anyone really fooled? It’s not the job of he judges to change their minds at the last minute. That would be, I dunno, too human and not television enough. You have to build up the faux tension. Nature of the beast. 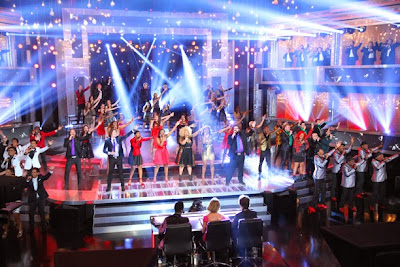 None of which makes me enjoy The Sing-Off any less. NBC, for the love of the pantheon, KEEP THIS SHOW GOING. It is one of the best things to appear on TV in the Fall/Winter season. It makes me tingle with delight. True music will never die, so let’s keep it in the public eye! Hey, can someone put that last sentence to song? Can I write a theme song for The Sing-Off that Pentatonix can perform over the opening titles? Can I? Hmm, maybe I should just find four to fifteen like-minded people and start working on harmonies...
Posted by Dang-Blasted at 5:55 PM