Another year, another parcel of games vying for my time. In 2013, of course, the 8th-gen consoles were rolled out, and I responded as I always do: by rolling my eyes and thinking that I’ll probably snag a PS4 in another couple years or so. I’m an adult with a job and other interests; how am I supposed to keep up? Once again, a lot of my favorite games of the year have been out for awhile, and I’m just now getting to them. And there were some upsets (Fez turned out to be way less cool than I thought, maybe because its puzzles are designed to make you feel stupid. On the other hand, my favorite game of the year came out of nowhere). Here, in my personal order of awesomeness, are... 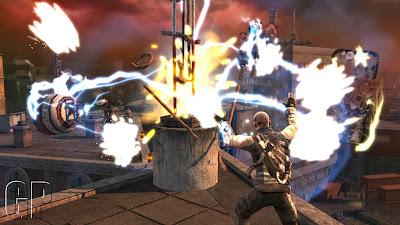 Honorable Mention: InFamous (PS3)
This isn’t on the main list because I’m playing it right now and won’t finish it before the new year. Seems wrong to reward an incomplete experience. However, it belongs here because of the excited tingle I get at the thought of tear-assing around the cityscape as electro-avenger and parkour enthusiast Cole McGrath, flinging cars around and zapping the scrotums off hapless gangbangers while the cringing populace showers me with accolades. InFamous shares DNA with one of my favorite series, Sly Cooper (who will be appearing later), but redefines your typical superhero scenario into an engagingly gritty moral-choice-a-thon with a kooky, convoluted plot and the ability to treat Fake New York City as your personal jungle gym. What’s not to love? This game is just all-around solid. In fact, I’m gonna go play it as soon as I finish writing this paragraph. There are just too many non-electrocuted evildoers out there. 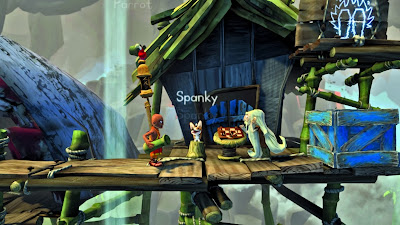 7. The Cave (Multi-Platform)
First up is a game that squeezed onto this list by pure tenacity, its personality making up for major gameplay gremlins. In The Cave, you play as a trio of oddballs (chosen from a pool of seven) who enter the titular cavern to seek their heart’s desire and grapple with darkly comedic dilemmas that range from “Do we murder our parents with rat poison?” to “Do I cause nuclear war for profit?” It’s a point-and-clicker with pretty easy puzzles (find Object A for Slot B), and the characters control like they’re covered in bacon grease. As a funny game, it can’t compare to something like Portal or Monkey Island, but I grooved to its vibe anyway. It has a juicy streak of cynicism, sending up all those games that take the themes of Good vs. Evil way too seriously (hello again, InFamous!). The seven protagonists have nice wordless personalities and the art design of the cave is stellar. Bottom line: I played through this damn game five times to get every possible ending for every character. I can’t do that and then leave it off the list. 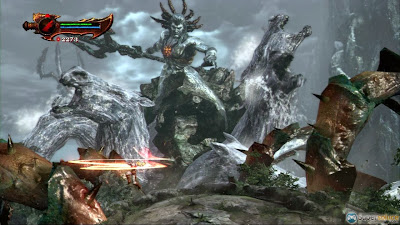 6. God of War III (PS3)
7th-gen was when games became a lot more like movies. Technical upgrades, processing power, and HDTV allowed for an emphasis on dynamic, cinematic gaming experiences. The downside is that games became less challenging and less interactive. Which sucks. But even a lesser God of War game is gonna show quality. Good old Kratos, mythology’s pissed-offiest antihero, is murdering his way through the Greek pantheon and it’s pretty ridiculous, but you can’t help but gasp when the camera pulls out to reveal a creature the size of Delaware. Which you are expected to somehow kill. This series stands out for its fluid combat, intricate puzzles, truly epic and creative setpieces, and for its seamless mesh of gaming and storytelling. Even if the story is dumb. Kratos isn’t gonna win any awards for charisma, but he persists in being one badass Spartan and quite the expert at destruction porn. I love this whole franchise in a guilty kind of way and the third entry didn’t disappoint. 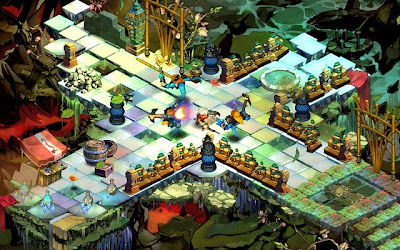 5. Bastion (Multi-Platform)
Speaking of storytelling, Bastion builds a vibrant, unique fantasy world with the kind of ease I envy. And then it blasts its world to smithereens and sends its hammer-wielding young hero on a quest to pick up the pieces and construct a base of operations from which humanity can begin anew...or not. Damn, is this game cool as a cucumber. Hardcore isometric combat with a wide variety of interesting weapons? Check. Beautiful baroque graphics? Check. A deep sense of mystery, sadness, and wonder? Triple check. As is often the case, I play games (especially indie games) long after everyone else has heaped awards on them, so you should already know how good Bastion is. Maybe this’ll remind you to replay it, or campaign for a sequel. Because its makers seem to have made a deal with the devil to pull off such a quality product. Its only huge flaw is that it’s too freaking short. 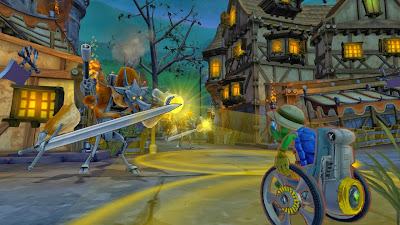 4. Sly Cooper: Thieves in Time (PS3)
It takes a lot to get me to pay full price for a newly-released game. Because gas money. But I cannot overemphasize how excited I was for a new Sly Cooper adventure, and to my delight, it pretty much met my expectations. Why? Because it was made by mod-centric fanboys who faithfully recreated all the suave, stealthy, cell-shaded fun, then gave it a luminous graphical upgrade. Prowling around rooftops, picking pockets, stealing priceless treasures -- it never ceases to be enjoyable. And this one had time travel! Some might complain that Thieves in Time didn’t add anything to the formula, to which I reply: picture your favorite type of cake, then ask yourself if it gets boring after multiple nommings. Exactly. I really hope the franchise continues; it would make me ever so happy. Long may the raccoon scheme! 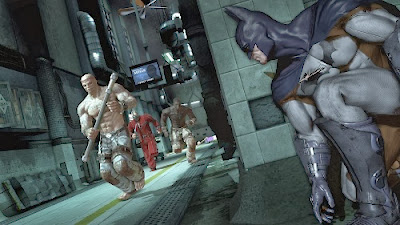 3. Batman: Arkham Asylum (Multi-Platform)
It’s fun to be Sly Cooper. It really is. But it is way, way more fun to be Batman. And this is the game that proved it. Yeah, another entry that everyone already knows is awesome. So? Tell me it’s not orgasmic to open your giant cape, glide bootheel-first into the surprised face of a hapless thug, then batarang his buddies into oblivion. Arkham Asylum perfectly marries the colorful, campy Batman of old with the darker, grittier modern version: one minute you’re haunted by your dead parents, next minute Harley Quinn is mincing around in a sexy nurse outfit and the Riddler is smarming it up in your earpiece. Great environments, great controls, great bat-toys, great villains...shitty boss battles, but you can’t have everything. Also, diehard Batman connoisseurs know that Mark Hamill is the best Joker. Not the funniest or scariest or best individual performance, just the overall best Joker. Hard to imagine a more perfect host for a near-perfect game. Arkham has since evolved into City and Origins versions, but the gaming glory began here. 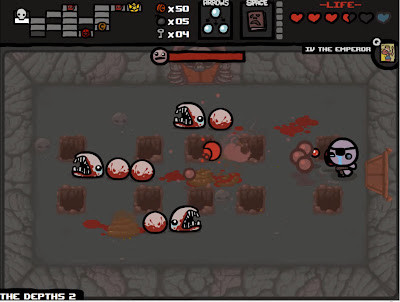 2. The Binding of Isaac (PC & Mac)
I feel like I have to apologize for enjoying this game so much. It’s a game in which you play a naked child whose psychotic mother wants to sacrifice him to God, and who uses his own tears as a weapon as he battles aborted fetuses and giant tumors. It has gore, scatology, numerous allusions to child abuse...and let’s not even get into the religious symbolism, which seems calculated to give Ned Flanders a massive coronary. Despite all this, The Binding of Isaac is buckets of shameful fun and utterly addictive. No save points here; each playthrough is a go-for-broke sprint to the end boss(es), a challenge to always top yourself. Everything is randomly generated: the right combination of augments and power-ups will turn you into a blazing juggernaut of destruction, but even then, fate can still nail you in the sweetmeats. So you try again...and again. And you love it. Especially with the Wrath of the Lamb expansion, which more than doubles the content. As for the themes, I believe this game is so offensive that it settles safely into the cozy world of satire. At least, I hope so, because otherwise I just plugged countless hours into the game that will trigger the Apocalypse. 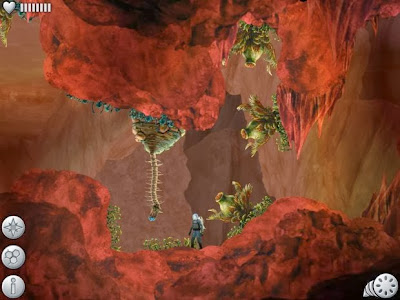 1. Waking Mars (PC & Mac)
As I said at the start, my favorite game of the year was a total surprise. I wasn’t amazed by Waking Mars for its graphics, controls, or atmosphere, but because it is a game that is utterly about the joy of discovery. It stars a cool-as-ice cosmonaut exploring a cave system below the surface of Mars. He is astounded to stumble upon an entire alien ecosystem, composed of lifeforms that are neither plants nor animals, but that coexist in very complex ways. As the game progresses, you learn to harness the Martian life by strategically collecting and planting seeds, creating cavernous gardens where each species plays an important role. There are no monsters or bad guys. There’s a token disaster at the beginning, but even then, the hero never seems to be in much danger. More like, he’s immersed in zen-like awe at being the first human to not only discover, but directly interact with aliens. And these aliens are so unique and creative that I want to give the developers a hug. Not only is the game fun and challenging to play, it taps into all the reasons I play games in the first place. A really good game can cause wonder as well as entertainment, and Waking Mars is entirely about such wonder. The teenage dipshits can play Modern Warfare all they want; just give me more indie games like this one.

Happy New Year. I’m already getting addicted to FTL, so it looks like the Best Games of 2014 list may be underway pretty quick. Raise your glass to the endless potential of gaming. And pray 2014 brings the richly deserved death of motion controls! Ahh, we can only hope.
Posted by Dang-Blasted at 8:51 AM