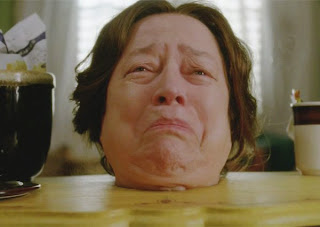 --Aww, Fiona ditched the headscarf already? She looked great in it! I prefer the scarf over trying to fool us into thinking Jessica Lange’s obvious real hair is a wig. But I guess it’s tasteless to rhapsodize over cancer patient chic, so let’s move on to other heads. Severed heads, bullets in heads, heads relieved of their eyeballs. No minotaur head, sadly, but I’m still holding out hope.

--It’s about time they stuck Lange and Bassett together again; we need our fix of incredible bitchy diva face-offs! This episode was a tad ungainly but went in directions I never guessed, and seemed to begin the process of uniting Team Witchcraft and Team Voodoo. Okay by me, mainly because I want to see more of Fiona and Laveau trying and failing to get along. And I would like to see a little more depth from Laveau’s character, which may well be forthcoming. That just leaves LaLaurie, who, as a disembodied head, was largely relegated to comic relief, except at the end, which I’ll get to. I admit, it’s always perversely funny to watch LaLaurie react to black culture. In this case, Queenie took charge of the decapitated Grande Dame and forced her to watch Roots. LOL. Kathy Bates is having way too much fun.

--Since this was Hank’s swansong, we got a lot of backstory on him and the peeps he works for: a sacred society of witch hunters, hiding behind a company called Delphi Trust, who have been battling witchdom since before Salem and oh my fucking Christ really? This is one subplot too many. I get it, I get it: evil male authority figures are evil and womanhood must win out. But the witch hunters just don’t do anything for me, and I’m dismayed that it seems like they’ll be the baddies from now on. Also, it was them who threw the acid at Cordelia, and that mystery could have had a better solution, IMHO. Anyway, in a childhood flashback, we learned Hank has always thought a little too hard about the ramifications of murdering women (fancy that!) and struggles to connect with his father, the hunters’ leader. Now Hank is torn three ways. His dad is telling him to smarten up, Laveau is telling him to snuff those witches or else, and his heart is telling him he still loves Cordelia. Boo hoo hoo. Never cared about Hank’s feelings and still don’t, though his final scene took my breath away. But, again, I’ll get to that.

--FANTASTIC episode for Myrtle, though she kinda vanished after the first half. I love how Myrtle is one of the good guys, yet capable of doing just as much horrible shit as Fiona. Case in point: she invited over the other council members, Pembroke and Quentin, fed them a luscious dinner of lobster and melon, then poisoned the shit out of them, SCOOPED OUT THEIR EYEBALLS, CHOPPED UP THEIR BODIES, AND PUT THE STOLEN PEEPERS INTO THE EYE SOCKETS OF CORDELIA. JESUS HAVISHAM CHRIST. Why does such a grisly sequence have me laughing and cheering, and why is Myrtle’s double murder about the most noble thing I can imagine right now? GAH, I love this show and I love Frances Conroy. So Cordelia’s sporting nice new two-toned eyes, but has lost her power of second sight. Which means she never knew what Hank really was. Which is too bad, because I almost wanted it to be Cordelia who dealt with Hank in the end. But, yet again, I’LL GET TO THAT.

--Token thirty seconds spent on the FrankenKyle subplot: Fiona discovers Kyle. Kyle kills Fiona’s new attack dog for no fucking reason. Fiona decides Kyle makes a better “attack dog” and fixes up his brain a bit. Oy. It’s like they’re laughing at my desire for Evan Peters to get better material. But at least he can talk again.

--I guess we now know more about Joan Ramsey than we ever wanted to. For some weird reason, Joan’s resurgence from the dead was never mentioned once. Wouldn’t that affect her, knowing she went where Jesus went? Anyway, Luke’s in a coma and Joan initially refused to let the young witches see him, but relented when Nan read Luke’s mind and conveyed his thoughts to his mother. So Joan changed her mind and decided Nan was awesome. But then she UN-changed her mind when Luke revealed, through Nan, that Joan murdered her cheatin’ husband with a car full of bees, which is an awesome way to murder someone, by the way. After chasing Nan away, Joan did what apparently comes naturally to her and smothered Luke with a pillow. Ouch. When you get down to it, Luke was a really tragic character. Sorry, Nan...if it makes you feel better, I’m rooting for you to be Supreme.

--Okay, so, I thought Myrtle’s little dinner party-turned-enucleation was gonna be the best scene of the ep, but I hadn’t counted on Hank’s desperate final gambit. Trapped between the witch hunters, Laveau, and his love for Cordelia, Hank did the one thing he thought would fix all his problems: he went after Team Voodoo. Holy shit. His bloody massacre in Laveau’s hair salon was intercut with LaLaurie watching 1960s Civil Rights footage and beginning, unwillingly, to weep. Only someone like Kathy Bates can sell such a character arc. And, yeah, I get the symbolism of a white dude murdering a bunch of black people at the same time. Thanks for being as heavy-handed as usual, Ryan Murphy. But it was just about the perfect cap-off for poor cowardly Hank. As he was about to kill Laveau, a wounded Queenie stuck a gun in her mouth and blew Hank’s brains out -- and, one assumes, her own. RIP, Queenie...you may have been angry and misguided, but you died a hero’s death, probably for the right cause. Laveau isn’t gonna forget that.

--Despite the exasperating witch hunter business, “Head” was an awesome note to end on before the winter hiatus, and I’m glad they didn’t stoop to a cheap cliffhanger. But you can bet we’re craving more, because we ended with Laveau turning up at Miss R’s, ready to discuss an alliance with Fiona. I love that Laveau now has no choice; she knows Delphi Trust will be gunning for her specifically and she has to choose the lesser evil. Brilliant. One more act, four more episodes, to go. How does it all turn out?

--Footnote: I suppose it’s possible Queenie isn’t dead, due to the nature of her powers, but since that seemed to be the perfect heroic/redemptive final act for her, her return would be lame as fuck. Sometimes, even on this show, people need to stay deceased. I know, right?
Posted by Dang-Blasted at 12:07 PM