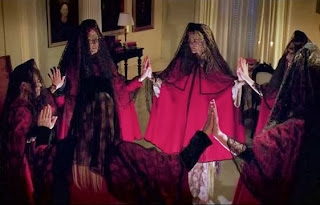 --First of all, nothing that happened this week is quite as exciting as the news that Lance Reddick will be playing Papa Legba in the final episodes of Coven. I adore Lance Reddick and I’m happy that this season is kinda making up for its careless treatment of the male gender as a whole. I mean, it amuses me that the tables have turned and us dudes are getting objectified, but the concept wears thin after enough time has passed. Yay for FILFs who ooze charisma! Oh, yeah, and a bunch of stuff happened. Not quite enough stuff. After the week off, we’re getting a little two-part parcel before...sigh...the much longer winter hiatus. So all the explosive shit will hit the fan next week. But this ep was still alright.

--Fiona finally hit rock-bottom, only to pull herself back up again. And it felt a little rushed. The “Fiona-must-die” subplot built to a head after A) Queenie officially announced her conversion to Team Voodoo, and B) Misty and Myrtle turned up on the doorstep of Miss R’s after Hank (they didn’t show his face, but I’m assuming it was Hank) attempted to fill Misty and her swamp spa with bullets. Cordelia rallied the ranks and they performed the titular rite, which was an anticlimax. It was supposed to determine the new Supreme, but the problem is, the old Supreme needs to die. And...doesn’t the rite not work without the current Supreme’s participation? I was very confused about that. And I expected the Sacred Taking to involve more than red robes and pricking of fingers, especially after all the cool magical stuff we’ve seen already. Anyway, Myrtle believes that Misty is the next Supreme, which means she isn’t, because it’s too early in the season. Also, way to marginalize Zoe once again, screenwriters.

--The cancer is ravaging Fiona very quickly, but not quickly enough for Cordelia’s taste, so she sent Madison and Myrtle to torment Fiona and urge her to kill herself with sleeping pills. Bereft of the comfort of her cuddly Axeman, scared to die alone and humiliated, Fiona got dolled up and took the pills. But then Spalding turned up. Well, Spalding’s ghost, full of ugly truths and insidious words and brandishing a dose of ipecac. And Fiona changed her mind. Like I said, this all seemed a bit rushed, checking off the obligatory beats for her character to hit. Still, righteous badass Fiona is better than weak, tremulous Fiona. And she proves that cancer-stricken women can and do look amazing in headscarves. And even Cordelia admits that the coven kinda needs Fiona’s brand of bitchiness right now. Because outside threats abound!

--Threat #1: Hank. Oh, yeah, and I totally forgot Patti LuPone was in this freakin’ show! Joan Ramsey’s back, all pissed off and religious, and because none of the characters are allowed to not be fucked up in some way, we learned she’s also a sadist who likes tying her son up and giving him bleach enemas. But in a pious kind of way. Seriously? They already did the “horrible psychosexual mom” subplot! At least it gave Nan stuff to do. Angry because she fancies herself Supreme and the other girls won’t take her seriously (“You guys suck balls!”), Nan ran to rescue Luke from his mommy, who I’m pretty sure threatened to kill her son, which is KINDA SIGNIFICANT. But then Hank fired from the shadows, Joan was killed, and Luke took a nonlethal hit to the head. I’m kinda hoping Luke will be, like, utterly covered in wounds by the season’s end. Happily, Misty was on hand to revive Joan (seriously, why would anyone want her back?) and Cordelia found a silver bullet that clued her in to the fact that witch hunters are on the prowl. Though she doesn’t seem to realize Hank is one of them. That’ll be solid grounds for divorce, methinks.

--Threat #2: Team Voodoo, as usual. Queenie is cheerfully running Laveau’s sordid errands and cutting hearts out of hobos and such, but she does still feel kinda sorry for LaLaurie. How touching. In a fucked up way, it was satisfying to see LaLaurie revert to her old, arrogant, racist ways. I mean, she’s got nothing to lose at this point. Or so we thought. But Laveau responded to LaLaurie’s insults by chopping her hand off, and then building from there. The episode ended with LaLaurie’s severed, still-living head in a cardboard box, a twist that would have worked better if Entertainment Weekly hadn’t spoiled it on the cover of their magazine. Dipshits. I’m still happy, because this supports my theory that Bastien the minotaur will be back. I liked him. As monsters go.

--Oh, and Kyle still exists. And Madison is all sad because he said he loves Zoe. That is quickly becoming the derpiest subplot of them all, and it annoys me how badly they’re squandering Evan Peters. For two seasons now. Eh, at least he’ll appear as Quicksilver in the next X-Men movie...which means he’ll get three lines before all the other mutants shove him offscreen. Get this dude better roles! And get him a bunch of Blues Clues episodes; that shit was the best learning tool ever.
Posted by Dang-Blasted at 4:26 PM