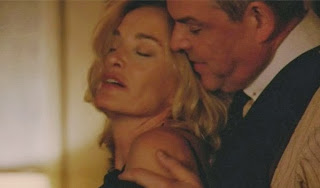 --This was an interesting episode: quieter and talkier than previous eps, it built on where the characters have been, and where they’re going. The title being the big clue. Madison and Kyle were dead. Spalding is dead. Fiona is going to be dead. Madame LaLaurie wishes she were dead. The Axeman is somewhere between life and death. And all are seeking something, some answer to the all-powerful je ne sais quoi of the great beyond. We as a species are obsessed with mortality, and previous seasons of AHS have touched quite heavily upon that -- first by depicting an ordinary house as a kind of one-way roach motel for the soul, then by depicting Death Herself as a living entity, a manifestation of what we wish, and fear, death could be. And now? Now we’re getting jaded. Death is oblivion. Death is a lack of all senses and thoughts. It’s the scariest thing you could imagine. But is it also somehow comforting?

--Not to Madison. Her evocative opening monologue set the scene as she drifted about Miss R’s like a spectre, trying everything she could think of -- drugs, booze, food, self-injury -- to feel. Just to feel SOMETHING. But it’s like she’s experiencing the world through a down mattress, and she hates herself for taking it all for granted back before her death. Meanwhile, we saw how truly pitiable FrankenKyle has become. In the opening flashback, we got another look at the happy, sassy, vibrant young man he should have been. Dammit, he was gonna be an engineer and bitch-slap all future Hurricane Katrinas! And now he’s a golem, his flesh borrowed from others, frustrated by Zoe’s stupid pity but unable to express his torment. Weirdly enough, these two zombified souls found comfort in one another; Zoe was upset to see Madison and Kyle doing the nasty, but afterwards, both seemed...warmer. Able to smile. And, hot damn, Zoe joined them for a three-way. Sex heals, especially if you’re an ex-corpse or your ladyparts are fatal to men.

--I’m down with sex healing, all right. Fight the forces of prudence and repression! It also seems to be working on Fiona, who allowed herself to be drawn into the seductions of the Axeman despite A) her hair coming out from chemo, and B) that dead guy in the bathtub of the apartment the Axeman claimed was his. She knew, on some level, that she was bedding a monster, but she wanted the danger. The affirmation that she’s going to take death on her own terms. The Axeman revealed to Fiona that he’s watched her, and loved/craved her, his entire life -- which makes him the man Spalding could never be, huh? Fiona initially hated the idea that a man, living or dead, had been witnessing her descent into old age. She almost shaved her head and gave into the sickness. But she returned to the Axeman in the end -- and, y’know, I honestly don’t believe he means her any harm. Both have always been driven by their passion, their need to pluck life like a ripe fruit, damn the consequences. Talk about rooting for evil.

--Speaking of Spalding....he dead. Like, so dead. Like, OMG dead. Cordelia, who’s transmogrified into a somewhat hilarious super-bitch, learned the truth about Madison’s death and passed it onto Zoe, claiming that Fiona needed to be killed before she could wipe out all her potential successors. (Again: not quite buying Zoe as ruthless badass. Eh.) Zoe then found Spalding’s tongue, awesomely kept fresh and undecayed by Myrtle’s decades-old truth-telling spell, and used a spell of her own to attach the organ right back where it belonged. So Myrtle vicariously got her way after all, as poor Spalding was forced to spit out the name of Madison’s real killer. And then Zoe stabbed Spalding in the heart. And this death, I suspect, is actually gonna be permanent. Farewell, you twisted, lovelorn, pitiable pervert. Look where devotion got you.

--And look where honesty and an open mind got LaLaurie! Her bond with Queenie seemed to strengthen even more, but what she didn’t know was that she unwillingly sealed her own fate by pointing out that Queenie’s skin color can’t be ignored even by those who’d be her equal. Queenie went to see Marie Laveau (I’ve been predicting this’d happen for ages), and Laveau laid on the syrupy words of praise better than Fiona ever could. So Queenie gave into her worst instincts and turned LaLaurie over to Team Voodoo. Discussion question: are we sorry for LaLaurie or not? She revealed what was possibly her worst deed ever: killing the newborn baby of a slave who was hitting the sack with LaLaurie’s husband. Was any of this the fault of the slave? Of course not, which is why LaLaurie’s reaction was even more appalling. Yet now...now she seems capable of change. But Laveau, the other monster in the room, is beginning a regimen of torture and horror upon her enemy...with Queenie’s help. Is Queenie gonna crack? Is she gonna get another shot at minotaur sex? (My current theory: Bastien is still alive, albeit bodiless, and Hank is going to become the new minotaur body.) And how much blood will LaLaurie have to spill before it’s all over?

--Another discussion topic: the final shot, which showed Laveau smearing her face with LaLaurie’s blood, just as LaLaurie did in an attempt to stay youthful. Was this just a symbolic act of revenge, or had LaLaurie been onto something? Could it be that Laveau stole the secret to eternal youth from LaLaurie? And consequently, does that mean LaLaurie, without realizing it, is a witch? That would explain the immortality and Bastien’s conversion to an actual minotaur. Hot damn again!

--Death is all around our characters, and it seems as if those who reject it are suffering more than those who embrace it. What’s better, using sex as therapy or keeping yourself alive for over a century because you harbor such an ugly grudge? I thought so.

--PS: Hank has a whole lot of guns. And he seems ready to use them. Can’t wait for the scene where Zoe catches bullets with her teeth and Queenie empties an entire clip into her own face to save the day. Death is also funny!
Posted by Dang-Blasted at 2:15 PM