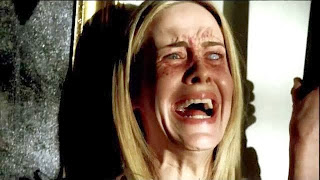 --Gather round, kiddies, and I’ll tell you a tale. A long time ago, in the dawning of the jazz age, New Orleans was terrorized by a very bad man. He killed a lot of people, killed them with an axe. He wrote mocking letters to the media, calling himself the Axeman, toying with the populace. He loved jazz, and insisted that everyone else love it too, or pay the price. After awhile, he disappeared, never to be caught. That much is known. But what the history books can’t possibly say is what really happened to the Axeman. You see, there was one house in New Orleans full of very special women. Women with a very special power. And they’d had enough. So one night, they set a clever little trap for the Axeman. He went into that house, axe in hand, and he never came back out.

--If we didn’t know already, AHS is all about the awesome hired talent. Please welcome Danny Huston, scary FILF extraordinaire, with his gravely, drawling, creepy/sexy voice. Hard to imagine a better Axeman, and hard not to be pleased that this further dive into sordid Nawlins history won’t just be a One-Shot Subplot. Hell, LaLaurie didn’t even appear this week; it was all about the Axeman, whose angry spirit has been sealed up in Miss R’s ever since those 1919 witches (oy, another not-terribly-talented Meryl Streep daughter?) lured him in with classical music and stabbed him about a zillion times in the everything. When Zoe, Nan, and Queenie used an old Ouija Board to try and figure out what happened to Madison, they inadvertently contacted the Axeman. And he’s mad. Mad, mad, mad. But sexy.

--Not sure how I feel about Zoe right now. I’m glad she has more to do, but her character development is a bit hard to swallow. Going from scared innocent to hardass leader figure? Taissa Farmiga’s good but she’s not selling it for me, not at the moment. Still, she’s getting good lines (“Witch up!”) and beating up other characters, so it ain’t all bad. Against the advice of the other gals, Zoe pretended to strike a deal with the Axeman’s spirit, which led her to Spalding’s doll-filled attic of creepy paraphelia, and Madison’s ripe corpse. Interrogated by the witches, Spalding continued to protect Fiona by presenting himself as a scuzzy, murdering pervert. At least Zoe’s smart enough to not buy his act, which makes me wonder how soon she’ll figure out Fiona killed Madison. Maybe soon.

--So Cordelia’s a bit more interesting now. Her blindness has given her Second Sight, which has led to all kinds of revelations about Hank’s infidelity, though his murder(s) continue to elude her. Speaking of which, the show thankfully didn’t dick around when explaining why the hell Hank killed Alexandra Breckenridge two eps ago. In a big ol’ twist, it turns out Hank is a PROFESSIONAL WITCH HUNTER working for Marie Laveau, and his entire marriage to Cordelia was part of a long con to insert him into witch society. As Cordelia attempts to track down other witches, she’s been unknowingly helping Hank murder them -- Alexandra, for instance, was a pyrokinetic who turned down a slot at Miss R’s and sealed her own fate. Now Laveau, reaching new plateaus of fury, has ordered Hank to commit full-blown witch genocide. Only Hank kinda sorta really loves Cordelia, so OOPS. The only downside to that sequence was that Josh Hamilton looked like he was doing middle-school theatre next to Angela Bassett, who chewed the scenery in great, greedy gulps, leaving a gaping hole where she will display her inevitable Emmy award. I had no idea human lips could curl into such shapes. Wild applause!

--Welcome to Misty Day’s Health Spa for the Undead Soul! Recently burned at the stake? Just chill under a relaxing heap of herb-infused swamp mud, and you’ll be right as rain! Still dunno what Misty’s up to, but sadly for her fangirlishness, FrankenKyle blundered back into the storyline and had a naked flip-out (is Evan Peters, like, contractually obliged to show his ass or something?), smashing Misty’s beloved stereo and silencing Stevie Nicks. (Don’t worry, Misty, you’ll likely get the real thing soon.) Since Misty’s generally a nice person, she still went with Zoe to help resurrect Madison. Pretty sure it was Zoe who did most of the resurrecting; also pretty sure it was her and not Misty who brought Kyle back in the first place. More Supreme power! So Madison’s back, and I realize that I honestly kinda missed her. But Misty wants nothing to do with Miss R’s. Says there’s something rotten about the place. Gee, ya think? Every central location on AHS -- the Murder House, Briarcliff Asylum, and now Miss Robichaux’s -- is tainted by generations of dirty deeds that seep from the woodwork.

--Like, for instance, the Axeman, who terrorized poor Cordelia for a bit before Zoe used yet another witchy power to find the right spell to stop him. (Subliminal comic relief: one of the old books on the shelf appeared to be a reference guide to gynecology.) The terrible downside, though, was that the Axeman was freed from the house and is now apparently back to being all flesh and blood. He needs a woman, and the PERFECT match for him is Fiona, who’s submitted herself to chemo treatments for Cordelia’s sake, but kinda blew the whole mother/daughter bond when Cordelia had a vision of Myrtle’s death. Fiona’s weaknesses are eating away at her, and the episode ended with her and the Axeman flirting in a bar. Weirdly enough, I feel like this might be good for them both. Seeing as how the witches have more and more enemies, I hope Fiona’s upcoming dose of awesome sex gets her ready for the battle to come. And that her paramour only uses two of his axes (the musical one and the one in his pants) on her.
Posted by Dang-Blasted at 10:19 AM