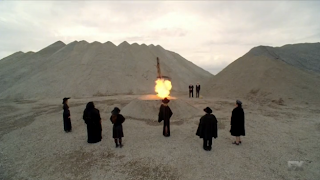 --Sorry for the delay; I was moving. Took a couple days to switch the internet on. But look what was waiting for me! A new episode of a crazy-ass show that keeps getting crazy-assier. Crazier-ass? Not sure. Anyway. This ep, despite its zombie kill-a-thon, was all about That Scene, which I’ll get to at the end. Because That Scene can’t be topped.

--I’ll cover the zombies first, because they were lame. At least, lame compared to That Scene and the other stuff that happened. There’s only so many ways you can stage a zombie attack. Lots of running and yelling “SHIT!”, lots of people saving other people’s asses. The usual. There were some good moments; I loved Queenie’s attempt to stop the zombie by wounding herself, and Zoe’s blood-spattered chainsaw spree could not not be amazing and wonderful. I figured Luke would die, but luckily for him, some random extras showed up to get devoured instead. The main thing was LaLaurie’s guilt at the sight of her zombified daughters, and the steadily-growing bond between her and Queenie, which is awfully touching...

--...even though LaLaurie lost some of her newly won sympathy during the opening flashback, which revealed that the former Grande Dame of Nawlins didn’t limit her cage-torture sessions to hapless black slaves. Nope, she did unspeakable things to her own children too -- although, to be fair, they were semi-seriously talking about matricide. The point is, LaLaurie was more of a monster than can be imagined, and her climb from the depths of damnation is slow, painful, and lined with barbed wire. But maybe not impossible.

--Zoe stepped up this week, unburdened by the absent FrankenKyle. And, rather significantly, she discovered that she has a whooooole lot more power than mere ladyparts of death. She somehow undid the zombie spell, ending the Halloween havoc and giving Marie Laveau a rude awakening. So is Zoe gonna be the next Supreme? She seems too obvious a choice, but you never know.

--Meanwhile, Cordelia lay in the hospital from Silent Hill, horribly scarred and blinded by acid. Fiona wandered the gloomy, nightmarish halls, tripping on stolen meds and awash in guilt. This led to That Scene, but it also led to a nasty confrontation with Hank, who seems legitimately devoted to Cordelia, so maybe the whole fucking-some-random-chick-and-then-murdering-her thing has some ulterior explanation that we can’t guess at. Interestingly, when Hank took Cordelia’s hand, she awoke and appeared to have a vision of his crime. So has being blinded opened her inner eye? Has her true witchy power been revealed? Is she about to actually become relevant? Hope so. The other thing that happened during this time was that Fiona saw the black-clad figure who flung the acid. Who could it be?

--Yep. Once again, I’m weirdly good at making predictions. The Council turned up again, full of bluster and accusations, demanding Fiona’s resignation as Supreme. Fiona was cool as a cucumber. Because she knew who the real evildoer in the room was. Myrtle Snow, ladies and gentlemen: a tormented, insecure, alienated woman so desperate for revenge that she’d, I dunno, fling acid in the face of her enemy’s daughter? Yep. Called it. However, it was a little unclear as to how guilty Myrtle was. Flashbacks seemed to confirm Fiona’s accusation and Myrtle folded under pressure, but Fiona sealed the deal with a little dirty trick, getting Queenie to use her powers so Myrtle would sport a damning acid burn of her own. The result? Myrtle Snow was burned at the stake for crimes against witchery. Great execution scene: elegant, disturbing, ironic, pitiable, highly fashionable, all of the above. It wasn’t That Scene, but it was close. Now the guilty Queenie has been charmed by Fiona and all is calm.......for now. At least until Madison’s corpse gets too stinky for Spalding to Febreze away.

--Now. That Scene. This ep played with the themes of bad mothers, as demonstrated by LaLaurie and Fiona. During her trippy stroll through the hospital, Fiona encountered a weeping young woman whose baby daughter had been stillborn. Cutting through the woman’s horror and self-loathing, Fiona placed the dead infant in her arms and told her to speak to her lifeless child. To say words of love and devotion, the words Fiona herself never said, or never meant. And then Fiona brought the baby back to life, sacrificing a little more of her power, her lifeforce, so a young mother could have a chance. The scene almost brought me to tears. Jessica Lange’s acting was so good that it utterly eclipsed anything else that might or did happen. See, Fiona is not evil. She is cruel, desperate, confused, guilty, angry...not evil. Maybe that’s what’s going to matter in the end. Man, how can the season top itself now?

--I’m sure it will. After all, there’s soooo much more craziness to come. As demonstrated in the closing scene. Who should come drifting in to visit the site of Myrtle’s fiery death? Misty Day, of course. And Misty proceeded to resurrect Myrtle. Yep. I’d say that Team Witchcraft and Team Voodoo are about to face a new threat. Team Outcast? Team Swampgirl? Team Stevie Nicks? Take your pick, but it’s gonna be awesome. Mainly because Frances Conroy (Frances Conroy Frances Conroy) is still around. We need to know if Myrtle was really guilty, and, more importantly, how she’s gonna get back at Fiona.

--I also want to know more about the albinos in black suits who do the Council’s busywork. Spin-off?
Posted by Dang-Blasted at 12:05 PM