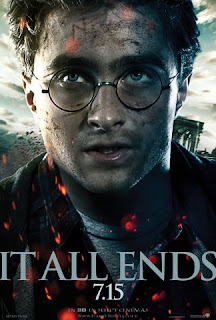 Well, that’s it. Just saw Harry Potter and the Deathly Hallows, Part 2. No more movies, no more books, franchise over. Very surreal, isn’t it? I barely remember seeing Sorcerer’s Stone on bookstore shelves and thinking that it looked kind of goofy, back before it was Harry Fucking Potter, The Most Popular Thing Ever Made By Man. For the record, I liked the books and the movies just fine, thank you, but you won’t be seeing me write fucked-up Snape-on-Harry-on-Dobby slash any time soon. Shoot me if I do.

Rather than review the final film, I’m just gonna list the stuff I liked best and the stuff I didn’t like so much. Overall, I’d give it an A-. Damn good ending; not as good as Part One. Here we go....SPOILER WARNING!

Terrific action! Part One hogged all the plot and character building, while Part Two was basically one long, epic, balls-to-the-wall climax. Stuff exploded, shit got wrecked, the wizards went to war, and everything came down to a smackdown between Harry and Voldemort that was (to me) vastly improved from the book, in which Harry lectures Voldemort for like eight pages while everyone watches awkwardly. I prefer just seeing them alone together, desperately trying to be the One Who Lives while other battles rage elsewhere. Better stakes, no preaching. Wooo!

Neville kicked ASS and they were smart enough to give him some great moments. Overall, I was glad to see how many familiar faces made it through seven films, especially among the kids. Glad they dumped the foolhardy idea of replacing them all partway through. Heh, Matthew Lewis (Neville) got BIG, didn’t he? And Bonnie Wright (Ginny) is so lovely. I hope she keeps acting.

Know who else kicks ass? Dame Maggie Motherfucking Smith. Prof. McGonagall was GREAT in this, laid down the magical law in such satisfying ways, and got to utter the one really funny line in the movie. You’ll know when it comes.

Really nifty set pieces! The vaults of Gringotts Bank, the apocalyptic inferno in the Room of Requirement, the dreamy afterlife of King’s Cross, a notsalgic return to the Chamber of Secrets, the rubble and the ruin -- all were vivid. Hogwarts has evolved and changed shape throughout the series and now seemed surrounded by great chasms and peaks, as though the earth itself sought to reject the evil that had taken root within. Loved it. Not sure why it was snowing in June, though.

Great new actors joining the party, even at this late date. Ciaran Hinds was quite effective as Aberforth Dumbledore, and Kelly MacDonald was equal parts creepy and tragic as the ghost of Helena Ravenclaw. All the cast regulars, of course, fit their roles effortlessly by this point. Good to see Gary Oldman pop up! And Cho Chang, yay! She got screwed over in the fifth movie, so thank goodness they didn’t overlook her here. And Luna Lovegood....so awesome. No words.

And then...Snape. Poor, poor Snape. I would say that his final scenes were handled just about perfectly. Stunning. The whole time, I’ve been bemused by Alan Rickman’s handling of the role; rather than run with Snape’s nastiness, he’s made the man cold and remote. Now we see that it’s a desperate shell around a heart and soul in great pain. As J.K. Rowling surely intended. Alan Rickman is a great actor and Severus Snape is a great character with a great story arc. Dare you to disagreee.

Lastly, I liked the epilogue. It was nicely done. They didn’t encase the young actors in makeup, they just let them play adults, and it turned out just fine. I REALLY loved that the final scene and end credits use the classic John Williams music from the very first Potter film. So, so appropriate. I will warn that if you hated the epilogue in the book, you’ll hate it in the movie. But if you liked it, fear not. They ended this franchise with dignity and respect.

The slam-bang action was a double-edged Sword of Gryffindor. It was thrilling, yes, but a tad exhausting. A truly good film needs build-up and pacing; this had a few quiet moments, but mostly didn’t pause for breath. I pity the person who watches it without having seen Deathly Hallows, Part 1. It does not let you catch your bearings.

Not enough Hagrid, not enough Weasleys, not enough Slughorn, not enough Bellatrix, not enough Lupin/Tonks. Also, they brought back Prof. Trelawny (Emma Thompson) so she could appear for three seconds, not doing anything. I wanted to see her drop crystal balls on werewolves like in the book, dammit! Fuck!

WHY DIDN’T WORMTAIL DIE? WHY? I was confused when he failed to croak at the appointed time in Part One, but I figured they were gonna hand him a death scene with more impact later on. In this film? Nathing. He doesn’t even appear. What the fuck. I know these movies often overlook or drop subplots, but to leave out the very tragic and ironic death of a very important recurring character? They showed fucking Lavender Brown die but they couldn’t spare a moment for the demise of Wormtail? Bad choice, editing room guys. Baaaaaad choice.

Not a big fan of the gratuitious Daniel Radcliffe/Rupert Grint shirtless moment. Maybe it was the film’s color palette, but both of them appeared to be carved out of feta cheese. Ick. Shouldn’t Ron be swarthy? I blame Twilight for this.

Dumbledore’s backstory was mishandled here. Now, I dunno how much I like all the “Is Dumbledore Evil?” stuff in the book, but the movies should have either made more of it or left it out completely. Instead, we get a confusing scene where Aberforth mentions their sister Ariana and how Dumbledore was a big old bastard, but it goes nowhere. And then, when Harry meets Dumbledore in the Beyond, does he confront him at all about the whole “you-were-fattening-me-up-for-the-slaughter-this-whole-time” thing? Nope. All we’re left with is a big old uncertainty hanging over Dumbledore and his motives, which the book at least has the decency to wrap up.

I was really looking forward to “Not my daughter, you bitch!” Then it happened, and it wasn’t as cool as I thought it was gonna be. Nothing against Julie Waters (Mrs. Weasley). It seemed like the filmmakers knew everyone was waiting for that line, so they underlined it too much and it sounded too scripted. It was fan-baiting. Call it “Snakes On a Plane Syndrome.” But I will admit that Bellatrix died in a cool way.

“But, Lupin...what about your son?” Wait, says half the audience, Lupin has a son? EPIC FAIL, MOVIE. 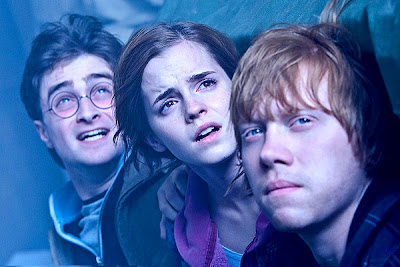 To end things on a positive note, this movie’s strengths outnumbered its weaknesses and I had a blast. I’ve had a blast, to some extent, with the entire movie series, and I may post some more stuff about the Harry Potter films later. For now, we say goodbye to these amazing actors and the beautiful spaces created for them to perform in. Bye, Harry. 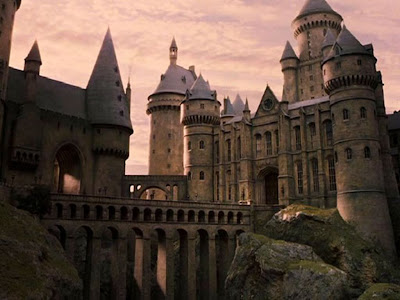