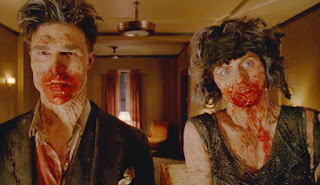 --Marcy! NOOOOO! Damn you, Rudolph Valentino! Damn you and your silent-movie vampire virus!

--I just demonstrated how utterly bonkers this show is when taken out of context. Or even in context. What a weirdly awesome episode this was. It can be risky to ignore most of your subplots, or it can really pay off. “Flicker” gave most of the cast the week off in order to unveil the backstory of The Countess, and it’s just as glamorous, gruesome, tragic, and sexy as one could expect. It began when Drake’s renovation crew discovered a barrier of solid metal...and behind it, an entire section of hallway, moldering and forgotten. But not unoccupied. A pair of decrepit vampires lurched from the shadows and fed upon the work crew. The Countess, for once, had no explanation. But, Iris noted, she looked afraid. Maybe she smelled something she recognized. A trace of cologne, an echo from far in the past...

--A creature like The Countess can only hail from a time when beauty and pleasure ruled the landscape. She has worn many guises, but it’s inevitable that the 1920s birthed her. Tinseltown. The flickers: those soundless, treasure-box films that changed America forever, blazing on screens, turning men and women into gods, before sound came along and snuffed the careers of the shrill-voiced and foreign-accented. Elizabeth, as she was once known, began her career as a cleavage-baring extra, but had the amazing fortune to catch the eye of film titan Rudolph Valentino...played by Finn Wittrock. My guess is that this dual casting is a nod to the monster movies of old, when vampires and mummies pined for long-dead lovers and set their sights on modern-day doppelgangers. Elizabeth was claimed by Valentino and his sultry wife, Natacha Rambova (Alexandra Daddario), and apart from the amazing sex, she found love. Real love.

--Valentino died. Elizabeth got the news during the inauguration of the Hotel Cortez, and prepared to fling herself out a window before a lusty James March saved her. Broken and jaded, she married March and descended into his twisted world. What did she care, as long as she had pretty things to distract her from the wound in her heart. Turned out Valentino not only lived, but held life eternal. I really dig this particular origin of vampirism: the “blood virus” was unearthed deep in the Carpathians by German director F.W. Murnau, as he filmed Nosferatu, which most agree is the first and greatest of classic vampire films. Nosferatu is not about charming, sophisticated blood-sippers. It is about a primal, bestial vampire who doesn’t even try to pass as a human being. Murnau embraced the virus, sharing in the savagery but ushering it into society. He saw the coming of the sound pictures, the death of silent Hollywood, and he sought to preserve something of the old ways. Murnau vampified Valentino, Valentino vampified Natacha, and both of them vampified Elizabeth, planning to spirit her away to a life of eternal bliss. And so they would have...if March hadn’t been listening in.

--Elizabeth never got her Hollywood ending. She lost her great lovers twice in a row. She inherited the Cortez and became The Countess, aloof and loveless, drowning in earthly pleasures. In the present day, The Countess visited March for a cool, cordial private dinner. She wanted to tell him she’s marrying Drake. March had something to tell her, too: he’s the root of all her misery. He nabbed Valentino and Natacha and bricked them up in that hallway to rot, unable to die. What will The Countess do, now that she knows the truth? It’s not like March can die twice...but maybe she can strike at him in other ways.

--“How would someone even know their anus needs bleaching? I couldn’t pick my butthole out of a lineup.” Oscar winner Kathy Bates, ladies and gentlemen.

--So, yeah, it turned out that the creaky old vampires in the hidden hallway were, you guessed it, Valentino and Natacha. And, to my sorrow, their third victim of the day was Marcy the realtor. Alas. She survived the Murder House only to gurgle her last on the tacky carpet of the Cortez. I shed a tear. Snark has lost one of its champions. After Marcy, the vamps devoured some Aussie strippers, because any nutritionist can tell you that Aussie strippers are high in antioxidants. Just as The Countess was learning what really became of Valentino and Natacha, they were striding from the hotel, young and healed, ready to enter a new age. Can Hollywood handle such a comeback? Can they be put in charge of that new brood of vampire kids?

--Besides giving us quality backstory, this ep made me care about Lowe’s odyssey again! Seemingly contrite, Lowe checked himself into a hospital for psychiatric help, but he had an ulterior motive: he’d discovered that the suspect in the Ten Commandment killings was being held there. Lowe busted into the suspect’s cell and found....a spooky girl named Wren (Jessica Belkin), one of The Countess’s little blonde vamps. Lowe listened, stunned, as Wren revealed she’d been helping the Ten Commandments killer. His semi-willing accomplice the whole time. Lowe’s this close to catching the killer, but he won’t like what he finds. Because I watched Wren closely, and I saw how she looked at Lowe and reacted to his words. And I knew. Lowe busted them both out of the hospital and promised he’d end the Ten Commandments killer for good. “You’re going to kill him?” Wren asked. Then: “I really like you. I’m sorry to see it end. Goodbye, John.” And then she flung herself in front of a truck. Her last words are the key. John Lowe is the Ten Commandments killer. Two men in one body. Wren knew it, and now, so do we. And that’s why I really can’t wait for the next episode. Stupid Thanksgiving, forcing us to take a week off!
Posted by Dang-Blasted at 1:58 PM