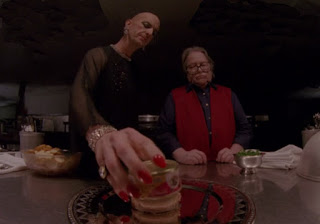 --This episode could get American Horror Story canceled. Oh, I don’t believe for a second that it will. But it could. An army of indignant moms could start a letter-writing campaign, because how DARE this show depict something as tasteless as an elementary school massacre! Children can’t be exposed to this! If my child watches a show not intended for children, it is not MY fault, it is the SHOW’S fault. My child needs to be protected from EVERYTHING! No vaccines! No trick-or-treating! If I see my neighbor’s kids outside without an adult, I’m calling the police! This will definitely ensure my child becomes a proper adult as opposed to a paranoid, entitled shithead like me! My parents failed! I will not fail!

--I just summed up a lot of what’s wrong with America right now. So did this ep. The Countess’s brand of vampirism became a conduit for razor-edged social commentary. And the school massacre scene blew me away, because it was so unexpected, so offensive, and because it felt so important somehow. In addition to that take on modern fear culture, we also saw self-entitlement, contempt for the elderly (in the US, “elderly” now refers to anyone over thirty-five), sexual repression, the well-meaning idiocy of parents...hell, they even got in a brief dig at cultural appropriation. (“You’ve got that dot on your forehead.” “I’m Hindu.”) For these reasons, this is my favorite episode of Hotel thus far. Which may be a problem, as it all felt more interesting than ghosts, vampires, or dildo-demons.

--Both members of our Vampire Mommy Brigade experienced the unpleasant effects of changing. Alex was forced to guzzle bags of blood at the hospital, and also to endure having a fisheye camera clamped to her ear, because it’s artsy! Seeing the impending doom of Max the Measles Kid, she used her blood to save him...and convert him. He promptly killed and ate his parents, but that was only the beginning of young Max’s adventures! Meanwhile, Iris got a big wake-up call. All her life, people have shat on her. As she suffered through new-vampire tremors, did her own son care for her? Nope! Donovan dragged Iris to Ramona’s McMansion and offered her up like a Christmas goose. A pawn in their petty little scheme to topple The Countess. Back at the hotel, a miserable Iris found comfort, and a blood cocktail, in Liz Taylor, who...

--Well. This ep ensured Liz Taylor as one of my favorite characters this season. Denis O’Hare seems born to play the role. I always assumed Liz was a ghost with a lurid backstory. No and no. In his old life, he was a thoroughly wretched little man, stuck in a utilitarian marriage, happy only when he checked into hotel rooms and indulged in his private fantasies of wearing fur and silk, of being glamorous. Beautiful. Perfect. The Countess smelled his unhappiness, and did something that proves she’s not all rotten: she liberated him. She showed him how glorious he could be, and his reaction, his shyness and joy and relief, warmed the room. The Countess also murdered Liz Taylor’s homophobic coworkers. And he’s been reading Voltaire and delivering sassy barbs ever since. For such an act of twisted kindness, The Countess wins karma points.

--Nobody cares about John Lowe. Boo hoo, he’s having a meltdown and he got fired from the force. At this point, he’d better be the Ten Commandments killer, otherwise he’s useless. Not surprisingly, he fell into bed with Sally. It’s funny that they’ve given Sarah Paulson her best AHS character since Asylum, and are kinda wasting her. Every minute she’s onscreen, with her parched voice and eternally tear-filled eyes, I’m riveted. So how about giving her more than one freakin’ scene per ep?

--Alex, who could have been the pointless filler character her husband has become, hijacked the episode when she vampified young Max. And that led into the amazing, horrible chaos I couldn’t help but admire. At school, Max began slaughtering adults and infecting kids. Lockdown ensued. The media descended. Worried parents clumped behind the police lines. When the bloodied, shaken students were led to safety, they had their story straight: it was a guy in black with a mask on who did the killing. An archetypal Bad Man whose existence will be accepted without question. “How could this happen?” the public will wail. People will demand more gun laws, even though guns weren’t involved. They will waste their time on armchair outrage and superficial, useless “solutions” while ignoring the deeper problems, like an army of vampire kids lurking in LA. But take away the bloodsucking and this bullshit logic could just as easily be applied to Sandy Hook. Sorry if that upsets you. But it’s true. Our fear, our belief that we need to be afraid rather than prepared, is our greatest enemy.

--Iris had to deal with perhaps the scariest creatures ever to appear on American Horror Story: HIPSTERS. Two smug, whiny twentysomethings (Jessica Lu and Darren Criss) checked into the Cortez because Halloween sucks, #StrollerVermin. If the twelve-and-unders have been raised to fear life, the next-oldest generation is worse, because they believe they deserve a medal just for existing. Their theme song is “First World Problems” by Weird Al, only they’d hate that, because Weird Al is a pitiable relic who’s only funny to six-year-olds, #HighFive. They will never get within fifty feet of a celebrity, but demand a discount just for name-dropping. The fact that they despise anyone older or younger than them reveals their social toxicity. Non-shitty Millennials such as myself apologize for the hipsters. We really do. Anyway, this pair of vape-heads heaped all their disdain upon Iris...and, with Liz Taylor’s help, she fought back. Cat food passed off as paté? How about some old-fashioned stabbing? Yes, Iris murdered the hipsters, but it wasn’t played for laughs. It was a tearful, furious catharsis for a woman scorned by everyone around her. “I MATTER!” Iris howled, on behalf of all the mothers who gave their children love only to become a cruel Tumblr meme, #DinosaurMom. And her new boldness spells trouble for Donovan and Ramona’s plan. Good. Fuck those two.

--For some reason, when The Countess and Tristan simultaneously craned their necks forward to scrutinize Iris, I lost my shit and giggled for a couple minutes. Why was that so funny? Maybe I needed it on account of this episode being very, very unfunny. Reminding us that real horror involves misguided values and ingrained dread. The kids who are taught to stay away from school windows. The fifteen-year-old who steals his dad’s car, kills three people with it, and thinks he’s the victim. The parents who attack a teacher for giving their child bad grades, while their child is online, bullying a chubby girl into committing suicide. This episode made me angry. I hope I’m not the only one.
Posted by Dang-Blasted at 4:52 PM