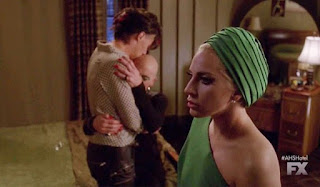 --There were four naked guys in this episode. We are truly living inside Ryan Murphy’s sex fantasies, people. To be fair, the ep served up a heaping helping of Nordic boobs and legs as well, plus The Countess’s pert, leather-clad booty. I believe sex is good for the soul, but the Hotel Cortez negates that effect. The only people who had good sex this week were bound for a tragic fate. And let’s not even get into childbirth!

--Actually, let’s. The “thing” in Room 33 was fleetingly mentioned ages ago, but now we’ve got the whole scoop. Room 33’s occupant is Bartholomew, the eternally crib-bound vampire son of The Countess. And how did little Barty-Boo come into the world? Heh. In 1926, The Countess needed to expel her rapidly-gestating bundle of joy, so where did she go? The fucking Murder House. Great to see that awful edifice again! The good Doctor Charles Montgomery (remember him?) was all too happy to abort The Countess’s baby, and utterly fascinated when said baby ate his nurse. Barty-Boo’s been in Room 33 ever since, never aging, ever hungry. Which may explain The Countess’s need to abduct actual children. Her one flesh-and-blood progeny will always be...a THING. It’s almost tragic.

--How low can Lowe go? Pretty low. He found the swimming pool coffins, requiring Alex and Liz Taylor to execute a swift cover-up. Their timing was excellent, because The Countess jetted off to Paris with Will Drake, Iris blew the whistle, and Donovan and Ramona slithered in to commit some righteous infanticide. No vampire kids were to be found, but that didn’t stop Ramona from visiting Room 33. Killing Bartholomew Countess (I’m gonna pretend his last name is “Countess” because it’s funny) would have been the ultimate act of vengeance...only Barty-Boo’s a trouper, and he escaped both Ramona’s blade and the room. Meanwhile, the yellow-bellied Donovan moped around the penthouse suite and encountered, of all people, the blonde Swedish babes from the premiere. Dead, of course. He explained to them that it’s easy for a ghost to become trapped in a behavioral loop (this was hilariously demonstrated by last week’s dead hipster stomping around, squalling for kale) and they need to find a “purpose.” Like that one waterlogged lady ghost on the fifth floor. Yeah, remember her? Me neither.

--Anyway, the Swedes tried some violent murder and didn’t enjoy it, so Alex recruited them to break Lowe’s widdle bwain and drive him out of the hotel. The sight of Lowe running around the lobby, butt-naked and covered in ghost blood, really made me think they’re taking a satirical approach to his mental ruination. “This is MY meltdown! I’m havin’ it!” And it stung, being kicked off the crime scene when the Ten Commandments killer struck yet again (Thou Shalt Not Take the Lord’s Name In Vain!). Hounded at every turn by various spooks, Lowe finally fled the Cortez, little realizing that Bartholomew had stowed away in his suitcase. Yeah...Lowe’s attempt to patch things up with Scarlett backfired (no pun intended) when he spotted Barty-Boo and emptied several rounds into the kitchen floor. Jesus, I feel so fucking sorry for Scarlett right now. She’s got a mom who’s flat-out ditched her, and a dad who still loves her but is a whackjob. She’s become the saddest tale Hotel has to tell.

--Or has she? In a very abrupt twist, we learned that Liz Taylor has fallen head-over-Pradas in love...with Tristan. Do I buy this? I believe in Liz’s love, but I can’t quite swallow that somebody as vain and superficial as Tristan would come to love Liz. Still, let’s learn us a lesson and not judge a book by its cover. Tristan had already figured out that his days with The Countess were numbered. Liz was hoping for one act of selflessness from The Countess. Just one. And Liz has become such a full-bodied character that I really felt for him, especially since it was obvious how this story would end. Liz should have paid attention to Ramona’s warning -- Ramona, who’s witnessed The Countess’s lethal jealousy firsthand. Instead, Liz and Tristan appealed to The Countess for mercy. For her blessing. Oh, she gave it, all right. She blessedly slit Tristan’s throat and told a weeping Liz, “He’s yours. Bury him.” I saw it coming, but it wasn’t any easier. Maybe Tristan will become a ghost; that’d be an okay consolation prize, right?

--Countess costume commentary: Brussels sprout hat. That is all.

--I have some extra space, so let’s finally talk about this season’s opening credits. The fact that I haven’t mentioned them yet shows they don’t do much for me. I mean, they’re fine, but the past couple years gave us artistically striking openers, and now they’ve fallen back on a lot of standard fare. Blood! Babes! Bad interior decorating! I do like the recurring theme of peering through a peephole, and I like how the actors’ names are spelled in mournful orange neon. But cramming the Ten Commandments in there makes things far too busy. And they need to stop adding crap to the theme music; it’s spookiest in its original, minimalist state. Eh.

--Overall, a brisk and gripping ep that covered good ground and made room for everybody on the main cast...except Sarah Paulson. FUCK. It’s like they’re openly mocking me at this point. But I have to give them credit for actually making little Bartholomew Countess scary. Less is more! The vampiric infant was freakier when we never quite glimpsed him. Until the end. And what a good final scene! Alex, who has turned into quite the calculating schemer, rescued Bartholomew from the Lowe residence and returned him to a very flustered Countess. Now Alex has something major to hold over her mistress’s head, which will add even more dynamics to the hotel’s power struggle. And at the very end, we finally got a brief look at Bartholomew’s face, and it was HORRIFYING. That is the kind of scary payoff this show needs more of!

--There’s less of a three-act structure this season, but since we’re just about at the halfway point, I trust Hotel can maintain some narrative momentum. Many questions remain to answer. And many mattresses remain to sweatily hump upon.
Posted by Dang-Blasted at 6:50 PM