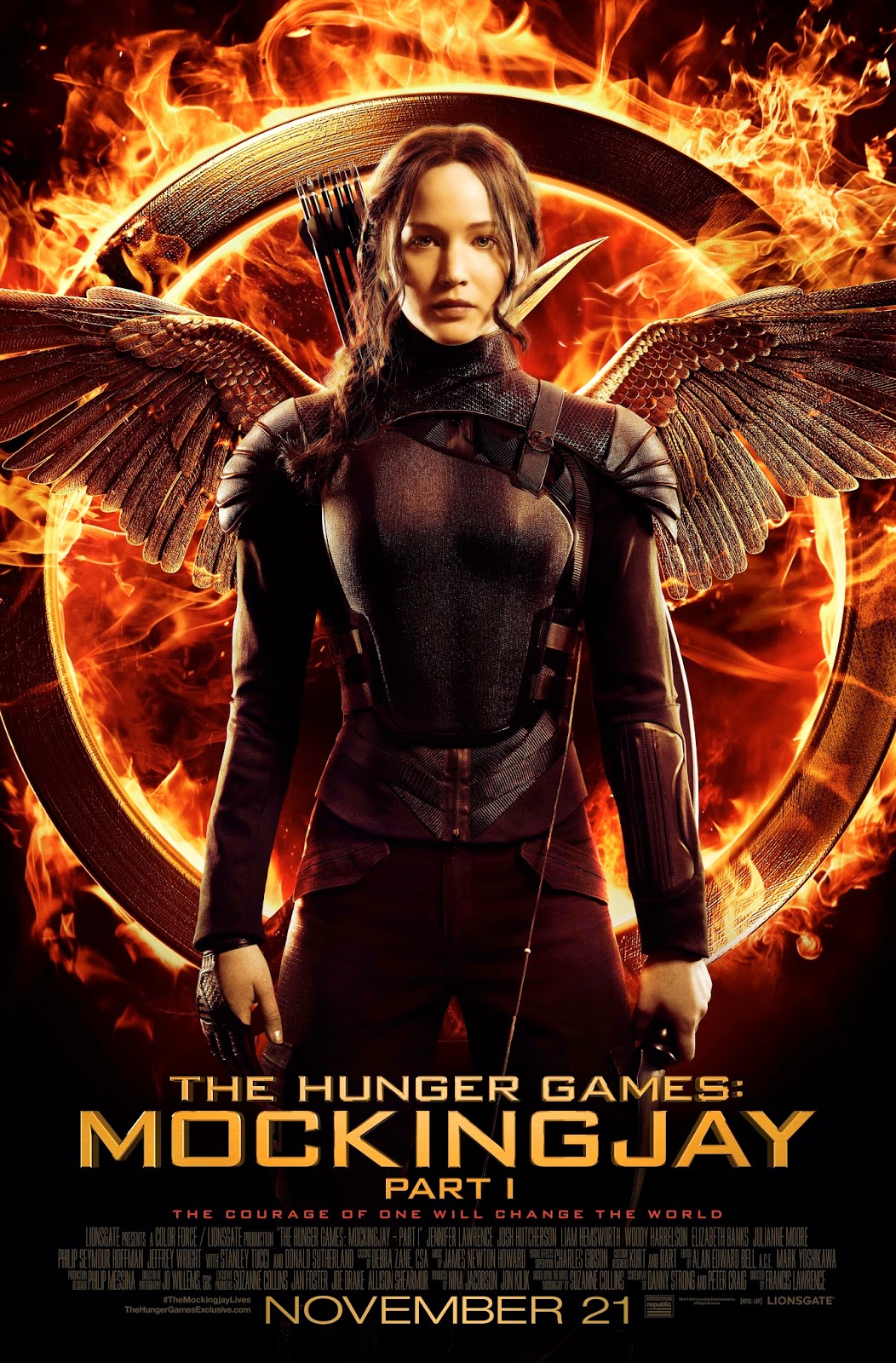 Hollywood. Stop playing with your action figures and park your ass for a second. We need to talk about the “Two-Part Finale” thing. I'm starting to believe that the jig is up. I mean, I get why Harry Potter and the Deathly Hallows did it – the book had major pacing problems and by splitting it into two films, they made each half distinctive and arguably more compelling. But you couldn't leave it alone. Twilight did it, Divergent is gonna do it, I'll be surprised if The Maze Runner limits itself to a trilogy...hell, even those Marvel boys fell victim. “It's to make the adaptation better!” you bleat. No. It's to make more money. A better adaptation is just a perk. You're lucky that the Hunger Games franchise is a cut above most of the others (catch up with my earlier reviews here and here), because, really, what did “Part One” of Mockingjay accomplish?

That sounded mean. Is Mockingjay, pt. 1 a bad film? Not at all. Is it the weakest in the series? Yes. I can say that with relative confidence even though we don't get Part Two for another year. You see, of the original novels, Mockingjay is the least liked. It's long and extremely bleak; it has no actual Hunger Games; beloved characters are killed off in a way that George R.R. Martin might chortle at; and heroine Katniss Everdeen suffers emotional gremlins that make her a tad less enjoyable. And guess what? All the most exciting and relevant stuff happens in the second half of the book! Thus, Part One dumps us into District 13, long believed destroyed by the Capitol, actually an underground fortress inhabited by military sourpusses, and frankly, a boring place to spend so much of the movie. Here is where we find Katniss (Jennifer Lawrence), who has now sabotaged two Hunger Games and incited many of the outlying Districts of Panem to revolution. Her home of District 12 has been reduced to rubble and corpses, but she remains, as does her family, her possible love interest, Gale (Liam Hemsworth), and any allies who haven't been killed or imprisoned. Sadly, the latter category includes her other possible love interest, Peeta (Josh Hutcherson). 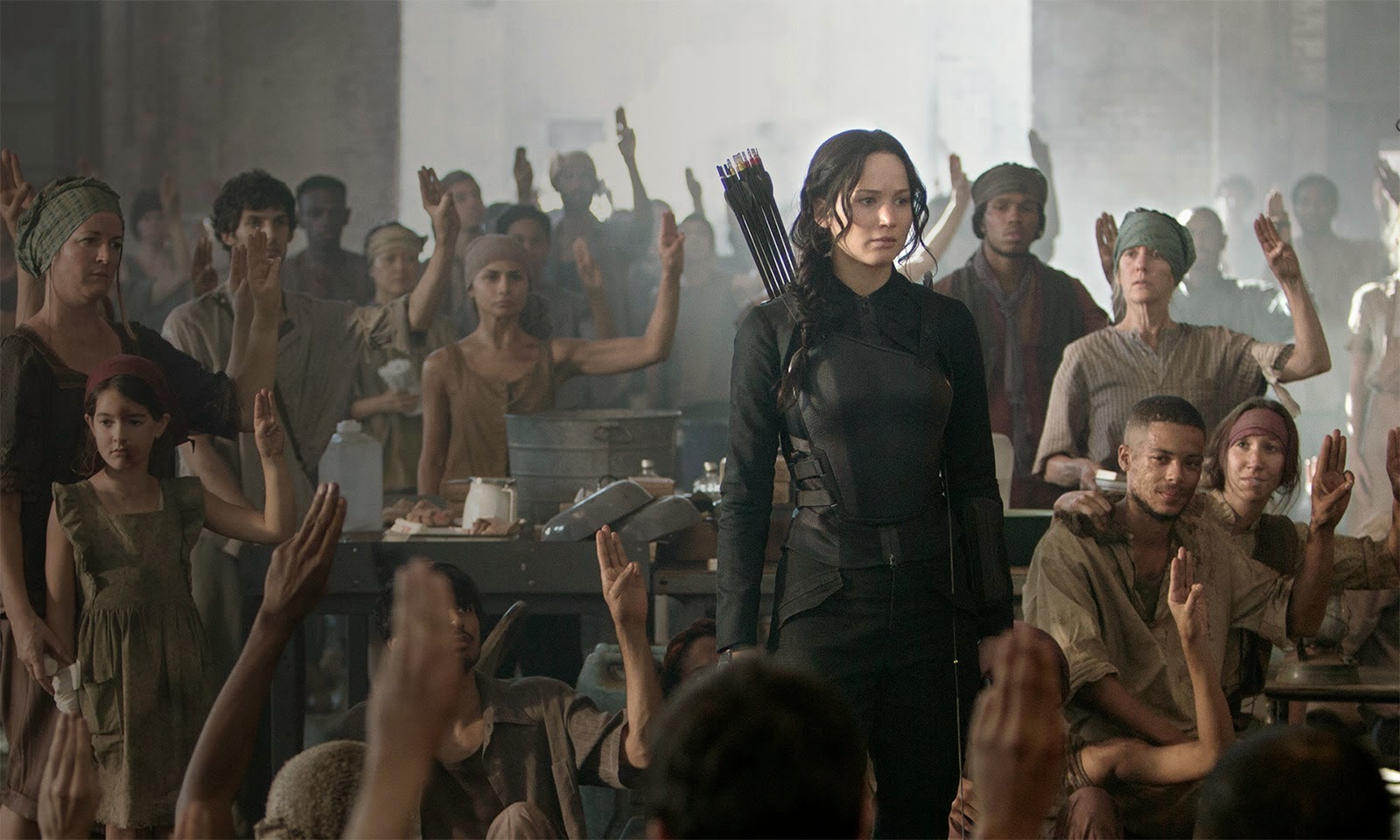 Alma Coin (Hunger Games newbie Julianne Moore), president of District 13, and spin-doctor Plutarch Heavensbee (the late Phillip Seymour Hoffman) have Big Plans for Katniss. She's going to be crammed into awesome body armor and stuck in front of a greenscreen as The Mockingjay, the face of the revolution! A symbol of defiance and unity! Katniss initially wants none of it. She wants her loved ones safe, and she wants Peeta rescued. But then Peeta starts appearing on Capitol television, perfectly dressed and polished, urging the rebels to surrender. Gasp! A traitor! Katniss refuses to believe it. She Mockingjays out, and the film becomes a series of conversations and hellish warzone escapades in which...not a lot happens, really. Oh, there are explosions. There is bloodshed that pushes the limits of PG-13. Katniss shoots more arrows, always a pleasurable sight. But it all seems muffled somehow, hidden behind a layer of who-really-gives-a-hoot.

All these characters are so familiar to us by now, and it's kinda interesting to see them grapple with a script that's basically a two-hour tease for the rest of Mockingjay. I can never not praise Jennifer Lawrence, and here, we see Katniss becoming a woman while still hanging on to the last glimmers of a childhood she never really had. I was also impressed by Hutcherson's unsettling portrayal of a guy who's seemingly sold out, until the cracks in the Capitol's makeover start to show. But Liam Hemsworth...hoo boy. He finally, FINALLY gets a decent amount of screen time, and all it serves is to show how uncharismatic he is. Gale should tick like a time bomb, torn between his love for Katniss and his need for bloody vengeance. Hemsworth is just...there. A hunk-shaped lump of nothing much, stalwart and pointless. And he's not the only one. After early attempts at Mockingjay propaganda fall amusingly flat (it's fun to watch a good actress portraying a bad actress), Coin and Plutarch send Katniss into the field accompanied by a film crew, led by the punk-styled Cressida (Natalie Dormer). This would have been a great opportunity to poke fun at stereotypes of guerilla filmmaking and hotshot young documentarians...but, no, the film crew is simply occupying space, like Gale. 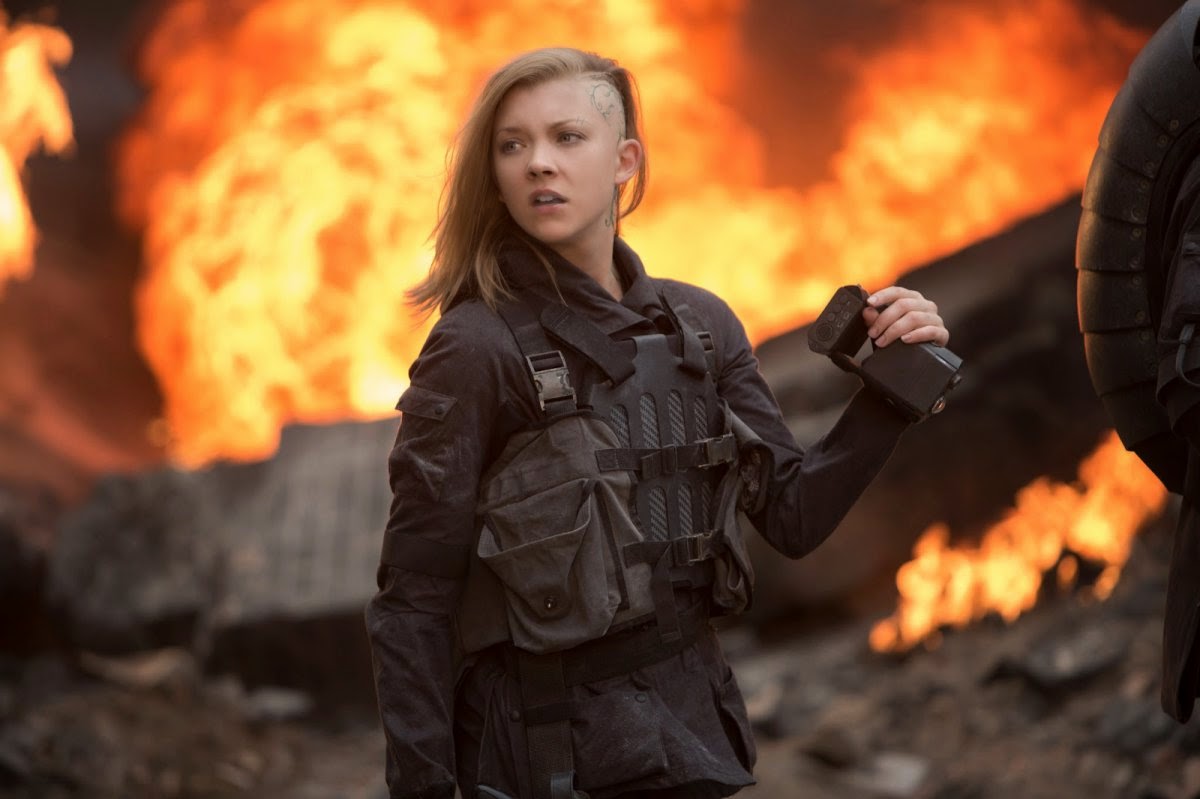 The film just has too many characters for its stagnant plot. It could have used a lot more of Woody Harrelson's Haymitch and Elizabeth Banks' Effie, an invaluable duo who are largely sidelined here. When Harrelson first appeared onscreen, a fond guffaw rippled through the theater. And there's a running visual gag about Effie's determination to wrangle high fashion from a world of gray jumpsuits and formica. But both have to ration screen time and neither is present enough for my liking. There's a lot of Hoffman, who always seemed like he wasn't comfy in the role, and Moore, who's one of the best actresses of our time but injects a bit too much warmth into the role of Alma Coin, considering her complete character arc (no spoilers). Yeah, I know, we're really here to watch Katniss. But even Katniss threatens to disappear into the scenery. Brief sequences in rebellious districts are way more exciting than anything happening in District 13. There's an effective bit late in the film in which a covert mission into the Capitol is intercut with a tortured testimony from ex-golden boy Finnick Odair (Sam Claflin). But Katniss isn't really in these scenes. She's treading water like everyone else.

I've been dragged down by this movie's weaknesses. It's still a fine film. This series is admirable for its subtleties, and for the ways in which certain crucial images – a rose, a cat, a pearl – are repeated in silence, their significance unspoken. The Hunger Games movies have never insulted our intelligence, and have found a kind of stark beauty in future dystopia. There's an artful moment in Mockingjay, pt. 1 where a hovercraft flies over an endless forest, and in among the trees, almost subliminal, are the ruins of buildings and bridges. And the final shot of the film is a moment of horror that guarantees we want Part Two to be out RIGHT NOW and not in another goddamn year. But if it were one movie, we wouldn't be waiting, would we? And it could have been one movie, guys. I would rather sit through a complete, three-plus-hour Mockingjay, numb buttocks notwithstanding, then experience two hours of a screen with unimportant things on it. Yeah, I'd watch Jennifer Lawrence and her supporting cast peel potatoes for two hours if I had to, but it's like they got trapped in another, less compelling film and occasionally Skype with the actual Hunger Games series. (“Hi, Donald! How's things? Still rocking the evil Kris Kringle beard?”) This is really a case where franchise-mania trumped the need to make the best film possible.

Still entertaining to watch. But maybe the odds aren't ever in Hollywood's favor. 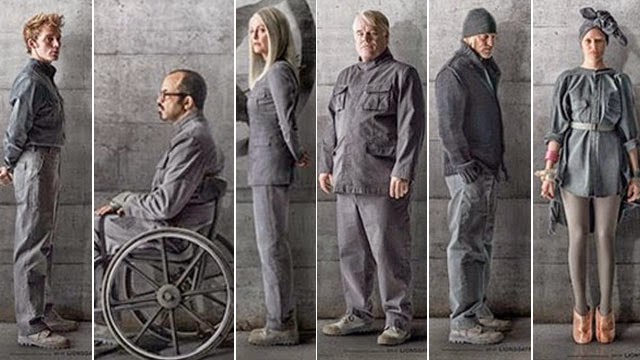