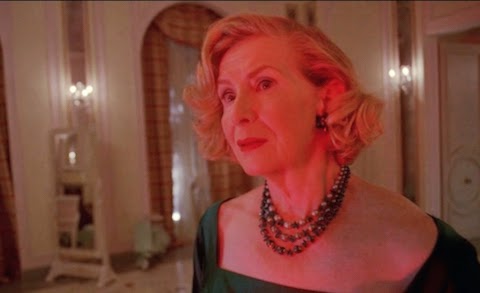 --Last week I had a totally WTF, made-my-day moment. I was watching Noah -- y’know, with Russell Crowe, Hermione Granger and some rock biters -- and as the end credits rolled, I gaped at a familiar name: Finn Wittrock. WHA?! I rewatched the opening scene of the movie, and sure enough, there was Dandy, hidden under furs and a beard, playing the younger version of Ray Winstone’s villain. It was a delightful shock and it made me think that Wittrock (who’s thirty, if you can believe it) may be destined to really break out as an actor. God knows Freak Show is giving him mucho exposure. In more ways than one. Naked butt.

--So. Am I shocked at the people who died this week? Well...kinda. I saw Ethel’s death coming a mile away, though the nature of her exit was compelling and provided many more Kathy Bates Emmy Award moments. Dell made it look like Ma Petite got nommed by some wild animal, and Elsa wept and moaned over the death of her “little angel,” and for once, I think she was actually sad about it. Not sad enough for Ethel, who bitterly confronted Elsa in her tent. This show loves to stick two of its Grande Dames together and let them have at it. Ethel was through with Elsa’s mama hen schtick and accused her of being a liar, a manipulator, a would-be murderess. She even whipped out a gun and shot Elsa in the leg, not realizing it was wooden. Ah, the pain...the pain of two best friends ending it like this. Elsa surely felt some pain too, but because her heart is rotten and maggot-infested, she talked Ethel into delaying her murder/suicide spree...and then flung a knife straight into Ethel’s eye. Just like that, the beating heart of the freak show was gone. If Ethel was the heart and Ma Petite was the joy, then what’s left?

--Okay, the flashback was annoying. It interrupted a great scene that should not have been interrupted, changed the tone, and was really kind of pointless. BUT, it allowed for Danny “Axeman” Huston to return unexpectedly as the kindly Italian prop-maker who gave Elsa her prosthetics. So I’m forgiving, because Danny Huston makes me tingle. If the next season stars Huston as a Gepetto-type who brings puppets to life, I’ll be so happy.

--Another sequence with a weird tone was the next stage in the Penny subplot, and I really hope it marks the end of the damn Penny subplot. With the aid of Stanley and Esmerelda, Elsa made Ethel’s death look like suicide-by-car-crash. Jimmy sank into booze and whining...dammit, just when he’d gotten over Meep! Desiree, meanwhile, somehow decided that Ethel’s death was a metaphor for the overall man’s war on womanhood, so she enlisted Penny, Eve, and Suzi, and they kidnapped Penny’s mean daddy and tarred/feathered the guy. Satisfying, maybe, but also a tad gratuitous. Bizarrely, it was Esmerelda who burst in and gave an earnest “you’re better than this!” speech to prevent them from straight-up murdering Penny’s dad. I have no freaking clue what’s up with Esmerelda. She’s always appearing in scenes that focus on other people, but we never know what’s going on in her head. My “Emma Roberts shouldn’t just be Emma Roberts” request has been denied. So far. Now can Penny just settle into tattooed bliss with Paul and stop hogging screen time?

--Elsa’s weepfest over Ethel’s death was her corniest yet, and she wasted no time in waltzing down to a cartoonish weight loss clinic in Miami and recruiting a plump lass named Barbara (Chrissy Metz) to be the freak show’s new Fat Lady, and also to be some kind of weird-ass psychosexual mommy figure for Jimmy. Yay, another subplot. I think Barbara is supposed to be a metaphor for the passive, self-harmful complacency that allows Elsa to stay in power. Maybe? She’s what we got instead of Bette and Dot, who Ethel cryptically said are “somewhere safe.” Hopefully she didn’t ensure their safety by breaking their legs with a sledgehammer. Reference joke!

--There was another big death this week that I did not see coming, although since Gloria got so much screen time, maybe I should have. The world kept closing in on Gloria, and they stuck her in a red dress and routinely bathed her in red light, just to foreshadow even more. Dora’s daughter Regina turned up, more determined than ever to ferret out what happened to her mom. Gloria coerced Dandy into seeing a therapist, which led nowhere. We never saw the therapist’s face, but his voice...was that Danny Huston again? I wouldn’t be surprised. Anyway, Gloria and Dandy were caught in a twisted dance, both loving and hating one another. Thanks to the wonders of Frances Conroy (Frances Conroy Frances Conroy), we saw how desperately Gloria needed Dandy, how much it hurt her that she’d produced a lifelong monster. When Dandy tearfully put a gun to his head, she begged him not to, said she couldn’t live without him. Whereupon Dandy said, “Okay,” and shot Gloria in the head. Then he bathed in her blood. DEAR LORD. His “Okay” was the best line of the episode and sums up the hollow void inside Dandy’s body and soul. He’s up there with Tate Langdon and Dr. Thredson as one of AHS’s freakiest bad guys. Kudos.

--RIP, Ethel and Gloria. Damn you, show, for always killing off your best actresses too soon. You’d better make up for it with some SERIOUS Angela Bassett exposure.
Posted by Dang-Blasted at 10:45 AM