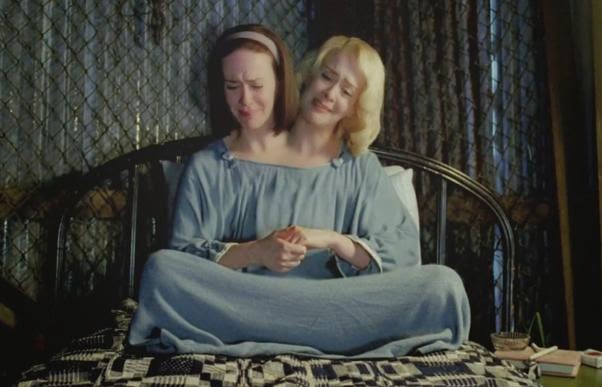 --This episode was originally entitled “The Fat Lady Sings.” It got changed pretty much at the last minute, causing poor Amazon Instant Video no end of confusion. I guess they thought the original title was, what, too tasteless? It seems to refer to Regina (RIP), although her doomed appeal to the authorities wasn’t that relevant. But, then, neither was the pastel-shaded abbatoir that ultimately gave the ep its name. The moral of either story, I guess, is that Dandy Mott is truly out of control, and the last hope of bringing him to justice may have failed. And who do we have to thank?

--Gee, Esmerelda, way to inadvertently cause multiple murders with your fake crystal ball bullshit! Are you EVER gonna be more than a plot device? Yeah, Dandy got a reading from Esmerelda and both participants did some double-talk, Dandy to hide his crimes (in this case, turning the corpses of Gloria and an Avon lady into a two-headed puppet), and Esmerelda to make her “fortune” sound good. Dandy sure did take her words to heart. He upgraded to slaughtering an entire houseful of ladies who were already having a bad day due to Jimmy’s magic fingers being too drunk to...um...finger. Regina turned up again but was hapless in the face of Dandy’s cheerful, blood-spattered confessions. She went to the cops, but Dandy was counting on it, and proceeded to bribe the shit out of Detective Turdlicker, as I have chosen to call him. Offered one million smackeroos, Detective Turdlicker capped Regina without a blink.

--Jimmy is drunk as FUCK and spent most of the episode being obnoxious. Chugging spirits. Boinking the fat lady where anyone can see. Sniveling, whining, puking, and you know something? I fucking hate it when characters have drunken meltdowns like this. It’s like a screenwriter’s shortcut, “insert clichéd lush behavior here.” Fuck, he even hallucinated Ethel, who told him to get over himself, and when your own delusion tells you to get over yourself, you oughta listen. All my life, I have had little sympathy for drunks, and Jimmy’s grief over his mother is no excuse to throw away everything he might have. Like father, like son.

--Truth. Because Dell is ALSO in a drunken, hallucinatory stupor. In this case, it’s about murdering Ma Petite and also about all his failures as a man, real or imagined or socially prescribed. It didn’t help when Stanley turned up long enough to display his mondo-member and make Dell fondle it. That and everything else drove Dell to hang himself, egged on by the Ethel hallucination, who is really quite well-spoken for a figment. Have I mentioned how Michael Chiklis is amazing in this role? I honestly didn’t know how that scene was gonna end, and I wanted Dell to live. He hanged himself, all right, but was saved at the last minute by Desiree. Reconciliation?

--Not sure, because, in a very brief set-up, a dapper gent arrived at the freak show and gave Desiree the most honey-smooth greeting ever. Angus T. Jefferson is his name, and the way Desiree said it made it clear that he is always to be called it in full. Angus T. Jefferson is Desiree’s “beau,” but what the fuck does that even mean? Hopefully something sexy and Angela Bassett-y.

--Deah dah-ry, thank you for making Bette and Dot interesting again, and giving both Sarah Paulsons some actual material. Ethel had stashed the twins in a motel but Elsa and Stanley found them and filled Dot’s head back up with promises of surgical separation (Elsa at least had the decency to not be crazy about this plan, though I still hate her bony ass). As Bette and Dot waited in the Murder Barn for the surgeon (actually one of Stanley’s derpy call boys), the twins had a real heart-to-heart, and we FINALLY got a Sarah Paulson Emmy Award Moment. Bette revealed that she’s not really dumb, just naive. Just eager to embrace her girlish fantasies. But she knows Dot is the stronger twin, the one who could survive on her own. She wants them to be together forever but, more so, she wants to stop seeing her sister suffer. In the end, Bette confessed that she wouldn’t mind dying if it meant Dot could have a normal life. Both sisters wept and comforted each other, and it was truly lovely and poignant. So much so...that it changed Dot’s mind.

--But this did not lead to a happy ending for Dot. She and Bette returned to Jimmy’s trailer, and when he stumbled in, Dot confessed her love for Jimmy. Bette gave her blessing. It was so sweet, and Jimmy was so tender as he gifted Dot with one kiss. But then he rejected her. Not cruelly or drunkenly. Mournfully. “I’m in love with someone else,” he said, and I kinda hope he’s referring to Esmerelda and not Barbara. Dot wept. Jimmy watched them go and his mouth twitched with all the things he wanted to say. But he held his tongue. Just like his dad, he blew it, and not in the sexual sense. Although...probably a good thing that Jimmy wasn’t making love to the twins when, moments later, Detective Turdlicker came tearing up and arrested Jimmy for all of Dandy’s murders.

--Christ, somebody had better stop Dandy, otherwise he’s gonna murder the entire female population of Florida. Maybe now that Dell has hit rock bottom, he can finally pull himself back up and do something good for a change. We shall see. Now, given that Evan Peters has just been framed for someone else’s murder spree, and given that Sister Eunice is scheduled to turn up next week, are we about to see some sort of surreal Freak Show/Asylum crossover? If so, can we lock Dandy and Dr. Thredson together in a room and see who out-batshits the other?

“I am God!”
“There is no God. Let me help you with your mommy issues, Dandy. I have a few myself.”
“That is a stylish human skin mask, Doctor. I had a mask once. Care to join me in bathing in the blood of women?"
“I’d prefer to freeze and then fuck their corpses.”