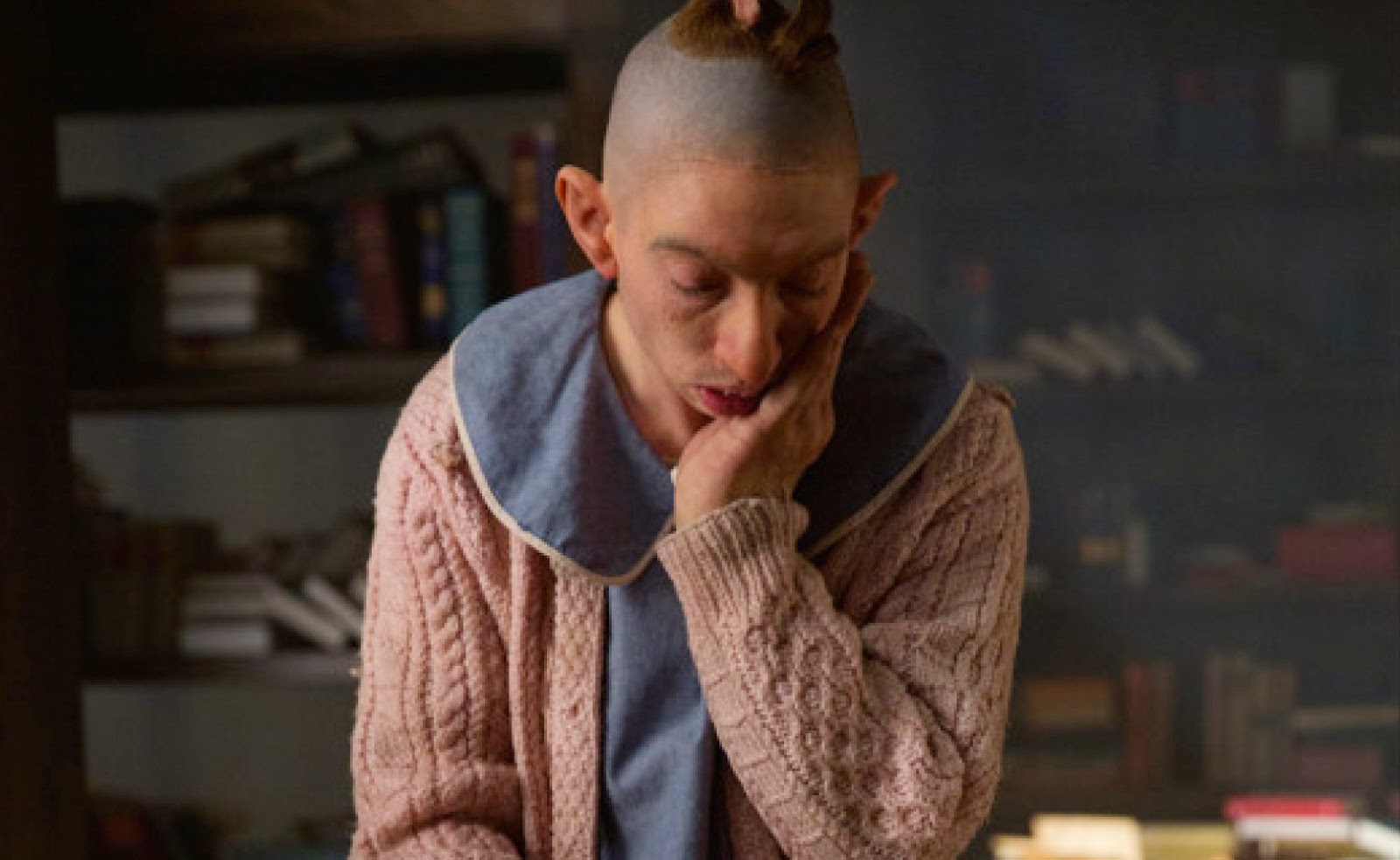 --Well. I am now slightly more sold on the whole “crossover” notion. When Ryan Murphy revealed that there are, or will be, connections between all the seasons of AHS, I groaned, because it seemed like a ploy for attention. “People are complaining that the show is getting stale? Quick, toss out the anthology format and start retconning!” Except...this episode handled the crossover surprisingly well. By invoking Asylum, it tapped into some of the emotional power that made Asylum the best season to date. It was tragic and heartwarming and it also snuck in a shocking twist that had BETTER not be a fakeout. So high marks!

--Another freak bites the dust. In this case, it’s Salty, the male pinhead, who died of natural causes. The ep acknowledged that people with unusual traits tend to burn briefly and brightly. Needless to say, Pepper was devastated, and needless to say, Stanley swooped in and snatched Salty’s body so he could hack the head off and sell it to the museum of oddities. Now I’m starting to hate Stanley more than Elsa, which is probably a good thing.

--Elsa did win back a little of my sympathy this week. I mean, she remains a shitty human being, but at least within her heart there’s room to love her makeshift family. Over schnapps, she described to Desiree the origins of her Cabinet of Curiosities. After fleeing to America, Elsa spent time in the circus circuit but craved stardom, so she hit on the idea of gathering unique performers to draw the crowds, who would then bask in Elsa’s (largely imagined) talent. Pepper was the first, rescued from an orphanage, but what Elsa didn’t expect was that she’d come to love her pinheaded minion so readily. To make Pepper happy, Elsa created a family for her: first Ma Petite, hilariously purchased from a traveling maharaja for three cases of Dr. Pepper (whoever wrote that gag should win a fucking award), and then fellow orphan Salty. Now Pepper has lost her family. Her small, warm world has crumbled.

--With Ethel’s passing, Desiree has kinda become the moral center of the freak show, and I’m very happy about that, because she’s moral with a dash of ruthless. She was tender with Dell but firmly told him that they needed to go their separate ways. After all, Desiree has Angus T. Jefferson, and Angus T. Jefferson doesn’t seem to care that his ladylove has a phallus. They went to Esmerelda for a crystal ball gazing, but Esmerelda’s the latest character to become an obnoxious drunk, and she did the whole “love is bullshit” thing. Sigh.

--Hey, at least Esmerelda got actual material! Plus her moral compass finally swung in the right direction! It happened when Bette and Dot offered her their would-be surgery money to buy Jimmy a lawyer. Dot made the message clear: I love Jimmy but I know I can’t have him because he loves you, so, bitch, you better be the girl of his motherfucking dreams. Elsewhere, Esmerelda revealed to Desiree that she and Stanley are con artists (and she’s another orphan, naturally), but at least her mental filter was functioning well enough that she didn’t add, “Oh, yeah, and your husband murdered Ma Petite so we could stick her tiny ass in a pickle jar.” Desiree’s suspicions were roused, and that, coupled with Bette and Dot’s entreaty, caused Esmerelda to decide to do the right thing. Boo yeah!

--I have to point something out before diving into the emotional stuff. There were several scenes in which we saw Elsa’s legs, and they were clearly flesh-and-blood legs and not prosthetics. Blooper! Oh, well...it’s like the “wig” last season that was obviously Jessica Lange’s real hair. Guys, stop giving Jessica Lange handicaps if you don’t have the budget to pull them off.

--This episode was all about Pepper, and I honestly think Naomi Grossman should be added to the list of AHS actresses who badly deserve an Emmy. I loved Pepper in Asylum but most of my love came after aliens fixed her brainbox. Here, though, we saw her heart, and saw that, even though her mind is crippled, she is aware enough to love, and to suffer. Only Elsa could see it; most people just view Pepper as a...well...retard. Elsa took Pepper to live with her sister. Trouble was clearly brewing, because A) Asylum told us of the awfulness to come, and B) the sister was played by Mare Winningham, the creepy incestuous mom from Coven. There wasn’t much horror in this episode, but I found plenty in the toxic, not-quite-right household in which Pepper spent the next decade. And then...welcome to Briarcliff Asylum. In 1962, Pepper’s sister gave birth to a deformed baby, and she and her husband entered a downward spiral which culminated in the husband murdering the baby and framing Pepper, with his wife’s implicit approval. It was vile and horrible and heartbreaking. Pepper was left in the kindly, if misguided, hands of Sister Mary Eunice. YAYYYYY! I love you, Lily Rabe! Seeing the goodness in Sister Eunice’s heart made me almost wish she hadn’t been possessed by Satan. But I’m still glad she was, because Evil Eunice is still my favorite AHS villain of all time. Bless her.

--The episode ended with a moment that was both poignant and startling: Pepper, in the Briarcliff library, gazing fondly at a Life magazine cover featuring...Elsa Mars. Elsa Mars, TV star. Whoa! I guess I never really thought that Elsa’d get her dreams. I’m not sure she deserves to. On the other hand, won’t the freak show be better off without her at this point?

--Let’s backtrack and discuss the other big twist. AHS goes on hiatus now, and we need to have something to make folks bite their nails for three weeks. Stanley visited Jimmy in prison, and (in another great gag) claimed to have hired Clarence Darrow’s son as Jimmy’s lawyer. But Darrow Jr. would need payment. What does Jimmy have that Stanley wants? OH, SHIT. Yes, Esmerelda took Desiree to the freak museum, spilling the beans on Stanley’s true motives. Desiree was appropriately appalled by the corpses of Ma Petite and Salty. But then the curator unveiled the newest exhibit: Jimmy’s severed hands. WHUMP. Esmerelda hit the floor. What the fuck happens now?! Assuming those are really Jimmy’s hands. They’d better be. You offer a tease like that, you better have the goddamn balls to follow through with it.