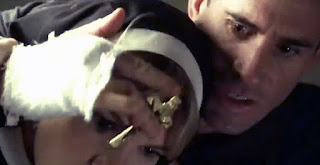 --The Devil is dead, long live the Pinhead! Seriously, now that we’ve bid farewell to Evil Eunice, I need a new favorite character, and it is, obviously, Pepper. She fucking OWNED the opening scenes, obliterating Dr. Arden with a deadpan tongue-lashing that pretty much summed up all the unfair shit we do to “handicapped” people. Like, for instance, assuming they killed a baby just because they look weird. Oops! Nope, Pepper’s less interested in drowning infants than in playing goodwife to them, and anything that gives her more screen time is fine by me. She also demonstrated this episode’s theme, which was that all the smug male authority figures are finally getting taken down a notch by resourceful women. Boo yah! Welcome back, AHS!

--Welcome back also to Monsignor Howard, who took some major steps toward redeeming himself. I always figured that his role in the story was to do one big, important deed. The Angel of Death wasn’t there to take his soul, but to warn him of the Devil in Eunice. (By the way, when you’re crucified, you basically drown in your own bodily fluid, so it’s a good thing he was rescued in time.) Of course, he’s still a gigantic tool, but tools do their jobs when you point them at the thing they need to whack, nail, or slice. Howard’s initial attempts to banish Evil Eunice only got him devil-raped, but after a desperate entreaty from Judy (notice now he managed to twist his apology to her so it was all about him...tool), he finally, finally, finally got the freaking upper hand. Therein lies the Devil’s one weakness: though it can predict what others will do, it doesn’t always bother considering the consequences of what it will do. To taunt Howard, Evil Eunice let Actual Eunice free one last time, and Howard seized the moment to toss the beleaguered nun off the third-floor balcony. Kersplat! Guess we’ll never know if Evil Eunice had a master plan beyond “Fuck everyone up as much as humanly and inhumanly possible.” But, hey, one villain down!

--Wait, no, TWO, villains down! This ep saw the swansong of Dr. Arden, too. Everything he thought he could control was taken from him. His scientific knowledge is nothing in the face of aliens, demonic possession, and flat-out resurrection. Worse, he’s lost his pious little masturbatory trinket, Eunice, for good. He has nothing left but all the memories of the bad shit he did. In a twisted way, Arden really did care for Eunice, and so her final descent into evil caused his shell to crack, and we got a glimpse of the unhappy man under the smug Nazi veneer. Despairing, Arden euthanized his forest-dwelling nuke-proof mutants, and let me just say that I was very let down by that subplot. It was introduced as a big thing, and then they just sort of forgot about it. This season felt a bit crowded with ideas, and in the end, I really feel they could have pruned the forest monsters without losing much. Anyway, Arden was too cowardly to kill himself with Evil Eunice leering at him, but after her death, he climbed astride her lovely, innocent body and cremated himself along with her. RIP, you utter shithead of a human being.

--ONCE AGAIN, Jude sinks farther than I thought she could sink! This ep’s Jude-bashing took the form of electroshock therapy, because there hasn’t been quite enough irony on this show yet. Evil Eunice, almost cumming with glee, turned the juice up to eleven and liquified Jude’s brain -- although Jude still has just enough of her wits to want to set things right. Good luck with that. The best part was that Jude’s now having delusions, which took the form of a full-on musical number in the common room. Love it! I think AHS may be the only show that’s actually more enjoyable when it jumps the shark. I also liked Kit’s and Lana’s expressions during the fantasy: “WTF is happening here? Oh, well, let’s roll with it.” Can this happen in every ep from now on? No?

--One major villain left, of course. Thredson, we learned, was freed by Evil Eunice (one last shitty deed!) and is now back in nerdy, passive-aggressive doctor mode. He, Lana, and Kit are locked in a tense game; each has something to lose, and none can fully concede to their opponent. Thredson seemed to claim victory when he stumbled upon Grace, hidden away in Arden’s operating theater, giving birth to a rather turnip-headed baby. The baby is apparently Kit’s, and Thredson used it as a sweet bargaining chip. I’m wondering...if Pepper was all threatening to Arden when he tried to do bad things to Grace, then why the fuck is she okay with Grace being in the clutches of fucking Bloody Face? Maybe she knows Thredson can’t really do anything. Especially since Lana realized: “Hey. He’s acting like he can control me because I’m carrying his child. But who the fuck has the fucking womb here, anyway?!” So Lana has the upper hand for now, as she’s re-hidden Thredson’s confession tape and knows he won’t hurt her. Ball’s in your court, Thredson!

--I’m guessing that the final three episodes will deal with the downfall of Briarcliff (perhaps set in motion by Howard and the Mother Superior), the redemption of Judy Martin, the unveiling of the aliens’ plan, and the payoff of the Lana/Thredson business, which will segue into the future subplot. Sounds good to me! I have faith that AHS will not disappoint me after we’ve come this far.

--Can I have Grace back, though? Not just back physically, but back as in having a personality again. All she’s done so far is sit around with a beatific look on her face, saying nothing. What happened to “Screw you, Judas bitch!”? What happened to axe-murdering your parents out of desperation? I liked the old Grace better!

--Is it wrong that I’m picturing Kit, Grace, and Alma going on to live in some sort of alien-assisted three-way relationship? It’s probably just because I’ve been reading a lot of Octavia E. Butler.

--Oh, one more thing. Ryan Murphy teased that this ep would contain a clue about Season Three. The most obvious clue location was the jukebox. Maybe it was one of the song titles we glimpsed, or the word “CONGRESS” printed on a record. I’m sure there’ll be tons of speculation! Of course, the jukebox could be a huge red herring; remember that the Season Two clue was in dialogue delivered by Sarah Paulson’s Season One character. Who knows. Anyway, here’s a picture of Pepper, because she’s so awesome. 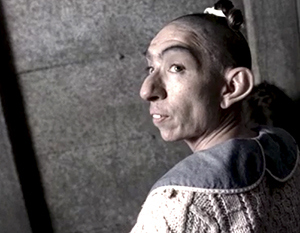