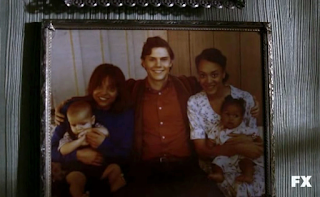 --What a sad episode this was. Good-sad, not bad-sad. Barely a trace of what you’d call “horror” elements; even an apparent appearance by the aliens was a fake-out. I’m rather impressed by the narrative path of the endgame, even if some fans aren’t: instead of building toward an explosive climax, things are slowly, regretfully winding down, as we see the painful consequences of what has come before. As the apparent happy endings crack and fall apart, and the sad endings are dragged on and on. The episode was divided into chapters, showing the fallout for each survivor over the years, and it was never easy to see. Never. I’m very happy this ep was as thoughtful as it was.

--Chapter One: Kit wants everything and loses most of it. After a misleading pre-credits scene in which Kit appeared to murder someone with an axe, we jumped back in time to jump ahead in time to show how Kit, Alma, and Grace decided to exist in a cozy little polygamous hippie arrangement, raising both babies as “theirs” while Kit occasionally switched beds. To absolutely no one’s surprise, it didn’t work, and the alien abductions were just the catalyst for a meltdown. Alma wanted to forget all about her ordeal, but Grace became blissfully convinced that the aliens were benevolent...and would return. Especially if she drew lots of charcoal pictures of their ugly vagina-faces. Poor Grace. Poor Alma. Each was standing in the way of the other one’s completion, and the tragic payoff was Alma, not Kit, murdering Grace with an axe, getting sent to Briarcliff, and dying there, while Kit looked on helplessly. Ah, Kit, you’ve never been the brightest bulb in the box. How sad that you thought you could reach a perfect compromise. At least he has his children...for now. You know, I’m not really happy with Grace’s ultimate fate. She began the story as a strong, compelling character, but after her alien trip, she was reduced to a plot device. Guess we can’t have everything.

--Chapter Two: Jude reigns over the fall of an empire. To my rage, Monsignor Howard did not die horribly as he deserved, but strolled off to become a Cardinal, after flat-out fucking LYING to Jude that he was going to release her. Briarcliff was given over to the state and became a slimy, fetid dumping hole for unwanted convicts and mental patients. Jude, with Pepper as her faithful vizier, tried to hold court over the increasingly loathsome asylum -- but her own sanity was deteriorating as well. Soon enough, Jude’s memories had become a confusing stew where certain events -- such as Pepper’s death -- were lost and time fragmented. For that matter, how do we know Howard really promised to free her? I liked this disorienting take on Jude’s madness, especially when a nasty alpha bitch showed up from a women’s prison and violently took charge. Only...the bitch was played by Frances Conroy, and when Jude looked upon that face, she (and we) saw the Angel of Death. Was that real? Can we trust a single thing we saw through Jude’s eyes? She was so pitiable; I always figured her character would go out in a blaze of glory, not slide into wretchedness with a whimper. But this show isn’t that kind.

--Chapter Three: Lana sells out. Honestly, this segment made me wince the most, because I’m an author myself and Lana’s chapter had some viciously cynical things to say about the art of writing and bookselling. Yup, Lana became the dreaded Celebrity Author, turning her real-life nightmare into a garish, inaccurate, lesbian-free piece of pulp called Maniac. She became a self-entitled pill, and even a visit from Kit didn’t help. Lana’s no monster -- she’ll never go that far -- but she gave up. She took the route she would’ve taken before her Briarcliff experience, and worse, she forgot about or marginalized the things she learned and the people who helped her. Maybe the worst thing this episode had to say was that we can’t change. Lana will always be a ruthless scavenger. Kit will always be a doofus who wants what society won’t let him have. Monsignor Howard will always be a smug little cunt. Jude will always flail impotently at forces beyond her control. Okay, yeah, there’s one episode left, so there’s still hope for some of these folks to make a turnaround (or for Howard to get fed into a wood chipper like I WANT HIM TO). But right now, it looks like our heroes are stuck in a rut. And that means they’ll die never knowing how they could have bettered themselves. And Lana’s death may be especially unpleasant, because...

--Epilogue: Johnny gets his gun. And in this case, his gun is an autographed copy of the book in which, according to Lana, he died in childbirth. Since his introduction, Johnny has been building himself into a volcano of rage and psychosexual energy, and he has one goal in mind before his murder spree comes to its explosive end: find Lana, tell her who he is, let her realize what she ultimately reaped, and then blow her head off -- just like she did to the original Bloody Face. JESUS, remember when hot newlyweds were poking around the ruins of Briarcliff and we were relishing their impending demise? How stories evolve.

--This whole episode, in a way, seemed like an extended epilogue -- but the epilogue continues next week, when everything comes to a head. Hopefully, we will see Lana realize her mistakes and act to put Briarcliff out of its misery. Hopefully, we will finally learn why the aliens are interested in Kit, and what’s planned for his children. Hopefully, Jude will achieve some scrap of peace before her light goes out. Hopefully, Monsignor Howard will be devoured by rabid jackals. And wasn’t Eric Stonestreet supposed to be in there somewhere? A lot of ground to cover in forty-five precious minutes. Fingers crossed for a great finale!

--Oh, yeah, and Leigh Emerson (the psycho Santa? Remember him?) went on a nun-killing spree after his escape. I figured something like that would happen. Why is it that, in a twisted way, he seems to have had the happiest ending?
Posted by Dang-Blasted at 10:52 AM