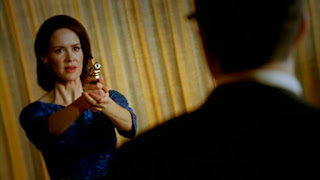 --Ugh, really? Monsignor Howard is the villain now? What a dumb move on the show’s part. Yeah, I guess you could call it unexpected; hell, I’ve been assuming from Episode One that the dude’s main function was to be a huge tool and then die early on. So we might not have seen his rise to heinousness coming, but that doesn’t make it okay. I don’t like his tremulous little weird-accented voice. I don’t like how he squinches his face up at people, like he’s trying and failing to talk to a smart toddler. Maybe it’s just the acting choices, in which case I ask, what happened to the dreamy, smoldering Joseph Fiennes from Shakespeare In Love? And what happened that made the AHS team decide to wipe out all the bad guys early and leave this doofus around? Eh, good episode anyway.

--Lana’s out! Yes, “Spilt Milk” was all about escaping your worst fate only to realize that Happily Ever After is an outdated and pitifully unfounded notion in the cruel real world. How comforting! The ep had barely settled in when Lana was sprung from Briarcliff by Mother Claudia, flipping Thredson the bird as she drove away with his confession tape. An admittedly awesome moment. Now our favorite Sapphic badass is ready to tear Briarcliff to the ground, but unfortunately, she’s got a new hangup: her baby. Her rape baby. Her rape baby by Thredson. She may have done in the daddy, but despite going to a Vera Drake-type for a professional abortion, Lana got cold feet. “No more death!” she insisted, and as the episode ended, she was reluctantly allowing the newly born Johnny to suckle. While staring at an upside-down cross. Because symbolism! I gotta admit, seeing Lana back in full-on ruthless reporter mode is great, especially now that she’s got a real cause to fight for. But there’re a feeewwww more smug male authority figures to knock down first.

--Thredson’s out! Out of time, out of luck, out of not having bullets in his skull. Our heroes finally got the permanent drop on him (I love how Kit seemed to give in to Thredson while secretly allowing Lana to slip past), and the mad shrink soon returned home to find Lana the Femme Fatale waiting with a pistol and a sexy blue dress. Great scene; no matter what you say, the chemistry between Sarah Paulson and Zach Quinto (who are pals in real life) has never been less than stellar. Seemingly complacent, Thredson drove one last knife into Lana by describing his horrific treatment of her late lover, Wendy, then smugly pointing out that, as a certified nutcase, he was headed for an institution rather than the chair. And the whole time, he was just stalling for time until he could grab his own hidden gun. Lana, realizing what he was up to, realizing that if she showed even a hint of compassion, the whole awful cycle would continue, blew his fucking brains out. HELL, yeah! Only, because of the whole baby thing...is she really the victor? I’m sure that question will be addressed in the final two episodes. Speaking of which...

--The Wacky Adventures of Johnny Morgan-Thredson-Winters! See Johnny cry! See Johnny rave! See Johnny hire an overly enthusiastic prostitute and suckle milk from her plus-size motherly bosom! See Johnny get bogged down with his mommy issues! Yeah....Lana’s happily-ever-after won’t come, will it? Between losing Wendy, birthing Johnny, and still being a woman in a penis-centric world, she’s going to have a haunted life, and we just know she’ll have to come back and deal with the sad monster her grown-up son has become.

--Kit’s out! And Grace! And baby makes three! Yes, all was more or less well in Walkerville, despite Thredson’s evil plot to stick baby Thomas in an orphanage so he could gain further leverage over Kit (again: what the hell happened to Pepper’s super alien powers?!). Grace, all moist-eyed and poignant, revealed that poor, poor Alma died in the aliens’ care. Kit sniffled and gulped and asked Grace to marry him, because “that’s what Alma would’ve wanted,” and the whole time, I’m thinking: something stinks here. With Thredson exposed and dead, Kit was freed from Briarcliff, and proceeded to coerce/blackmail the squinchy-faced Monsignor into letting Grace go too. After all, she’s legally deceased. And her last name is Bertrand! One mystery cleared up at least! So Kit and Grace and the baby headed home to Kit’s cozy little abode, only to find someone inside, waiting for them. And it was Alma. And she was holding a caramel-skinned baby. HAH! Best twist ever! I KNEW that the old, ruthless Grace was in there somewhere! I mean, I’m assuming she lied her pants off to Kit, because that makes for way better drama. Seriously can’t wait for the continuation of that subplot, in part because maybe we’ll FINALLY learn why Kit’s man-milk is so precious to aliens.

--Who’s not out yet? Jude. Yes, one lost soul still needs saving, but that’s gonna be hard. Because stupid, dipshit Monsignor Howard still has his stupid, dipshit ambitions, and now that Jude’s seen the light and started speaking all the painful truths, Howard’s decided she’s a huge liability. With his stupid, dipshit noble intentions, he’s keeping Briarcliff open...and keeping Jude locked away in some slimy hole while faking her death for the benefit of Lana and any other nosy parkers. What I’m trying to say here is that Howard is a stupid dipshit and I hate him...in part because he pales so much as a bad guy when compared to glorious Evil Eunice, creepy Thredson, or even the excessively pissy Dr. Arden. WORST VILLAIN EVER. Stupid dipshit stupid stupid dipshitty stupid....

--Fine. Whatever. Two more episodes to go. Lot of stuff I’m looking forward to, but more of “bad guy” Monsignor Howard is not one of them. You could have killed him like six episodes ago, show! Is this really necessary?

--“So, Clea, how’s the old acting career going?” “Oh, not bad. Today I pretended to be a naked corpse while Spock from Star Trek violated me doggie-style. Par for the course, right?”