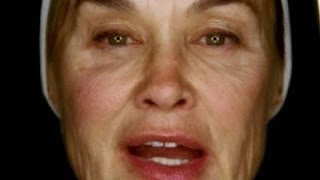 --And so it all ended. Endings, closures, climaxes, resolutions, justice and injustice. Phew. It was a long roller coaster ride, and with so much more ground to cover than Season One -- both in terms of plot and character -- can we help feeling a bit wrung out? Maybe it’s good that Asylum ended so leisurely, as opposed to the neck-snapping pace with which it opened. Ryan Murphy and the creative team made the decision to toss out the kookiest aspects of the story and focus on the human element, and you know? It worked. Mostly. I am happy with this ending. Mostly.

--So the framing device was the present day, as usual -- only now it was all about Lana. Well, except for the prologue that brought back poor Leo and Teresa, those doomed, randy souls who ventured into the ruins of Briarcliff an eternity ago. This time around, we learned who was watching them from the shadows: Johnny, full of drugs and hallucinations and rage. Yeah, it was he who hacked off Leo’s arm, which makes sense, though I was still hoping for it to be one of Arden’s nuke-proof monsters, still alive and kicking. Wouldn’t that have been a fantastic bit of irony, to learn that the Nazi doc’s inhumane experiments actually worked better than he could have hoped? But, eh, I’m glad they solved the mystery. Heh, at the time, I mistakenly thought that the Bloody Face who killed the wannabes was the same one Leo and Teresa stabbed, somehow returned to life. But, nope, Johnny is our man. More on him in a bit.

--Lana and her charmed life. In modern times, she’s aged quite well (cosmetic surgery didn’t hurt) and gotten herself a nice pad, a photogenic lover, and a plum role as a crusading TV journalist. During an in-home interview (with Johnny lurking in the background), Lana opened up on  things, giving us lots of exposition and lots of heartbreak. Rejoice, for she FINALLY stopped being a self-serving bitch long enough to re-enter the pitiful hole of Briarcliff and deliver the exposé that shut the damn place down. Those found-footage scenes, as Lana prowled amidst stinking blackness and shit-smeared, tortured patients, struggling to maintain her professionalism, were highly effective if a bit preachy. She was, of course, looking for one patient in particular. One lost soul named Judy Martin. And she found Jude...but not in Briarcliff. 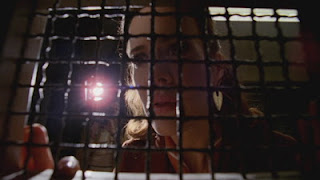 --Kit Walker, ladies and gentlemen. During this episode, my appreciation of the man went up many notches. I’d always written him off as the least compelling of the main characters, kind of bland and rather dopey. More a catalyst for all the alien business than a person in his own right. But now we got to see how his fundamental good-guyness paid off -- because it was Kit who redeemed Sister Jude. With no wives left, he turned his attentions to fixing her. He got her out of Briarcliff, installed her in his cozy hippie home, and -- with plenty of help from his spooky alien children and their mystical powers -- restored her to herself. Judy Martin was allowed by the fates to have six months of peace and happiness, sound in mind even as her body gently failed her. Six months being loved. Six months in a family. And that was enough for her soul to heal, for her to gracefully accept the kiss of the kind-faced woman with the red lipstick and the fearful, comforting black wings. A standing ovation for Jessica Lange, hopefully accompanied by awards. Jesus, how can she top this in Season Three?

--So....why did the aliens have such an investment in Kit? Well, we never really found out, and I know some people must be pissed off. (It’s Lost all over again, amirite?) My theory: it was partly random chance on their part, but they must have seen something in Kit that appealed to them. I mean, they’re aliens; how can we tell what they think? His inherent goodness, was that it? His open-minded nature? Or maybe he was descended from John the Baptist, who knows. Seeing as how his spooky alien children grew up to be powerful, influential people....well, maybe the experiment continues, and maybe the aliens’ ultimate goal is to make us a better species, as Grace believed. Or maybe they’re just cruelly fucking around with us, as Alma believed. Maybe they were just Dr. Arden with tentacles. But when Kit’s own life was about to end -- from pancreatic cancer, after a new bride and a lifelong friendship with Lana -- the aliens took him for good. So maybe he’s strapped to a table being milked of semen for all eternity, but I’d rather believe he’s being shown the mysteries of the cosmos. Heh, can you tell I’m on Grace’s side? Overall, I freely admit that the alien subplot didn’t...quite...work. It was one gimmick too many. BUT, it was still pulled off well (I loved the dreamlike portrayal of the abduction scenes), and I’m alright with it remaining a bit mysterious.

--Sooooo, Cardinal Howard. Did he get the fate he deserved? Well, I was kind of hoping his death would involve, I dunno, battery acid and a cheese grater or something. But what we got was acceptable. The showrunners realized how much we all hated Howard and did NOT let that smug fucktard off the hook. Lana got him in her sights and tore him down with a fresh report on Dr. Arden and all those human experiments that took place with Howard’s implicit permission. Whether or not she proved his crimes, she did induce enough guilt in Howard that he killed himself. Frankly, I wish someone else had done him in; he shouldn’t get to choose his own fate. Also, I wish that as he’d died, he’d looked up to see Evil Eunice smirking down at him. Welcoming him to her realm. Another missed opportunity. But justice was done. 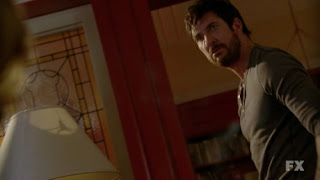 --Which brings us back to the present and to Johnny Thredson. He got his showdown with Lana, as we knew he would, only (of course) it didn’t go according to his script. This whole time, I’ve been rolling my eyes that Johnny could get away with his murder spree. Well, he didn’t, really; the FBI was one step behind him and he must’ve known that killing Lana would be his swansong. But when he came into her view, she was allllll ready for him. You see, she knew. She’d met him once, just once, when he was a boy. That was a turning point for them both: Lana realized that she’d always feel something for her rape baby, and Johnny understood who his mother was. Later in life, he found the fateful confession tape on eBay (lol), and thus was his fate sealed. He got what he wanted, held a gun to Lana’s forehead. Only she wasn’t scared. Just regretful. Poor Johnny really couldn’t be what his father was, and you know why? Because Oliver “Bloody Face” Thredson was brilliant, charming, and (until he met his equal in Lana) successful at what he did. Yes, he was a monster who succeeded (note his rise to cult-legend status à la Ed Gein), whereas Johnny was a monster who failed. And Lana knew it. Remember how last week, I said that people fundamentally can’t change? Lana will always be that ruthless, hard-hearted woman. She knew how to push Johnny’s buttons. She gave him the motherly bullshit, made him lower the gun and break down crying. And just when we thought we were in for a sappy ending, Lana took the gun and fucking blew her son’s motherfucking brains out. Two for two. Done. The end.

--And the coda? A flashback to Sister Jude at her villainous best, locking eyes with Lana during the glory days of Briarcliff and giving us the moral of the story: “You stare into the face of evil, evil stares right back.” Ahhh, words that could apply to so many things in this show. The insidious warblings of “Dominique” then heralded the final closing of the curtain. Briarcliff Manor becomes the spectre of bad, misguided ideas and bad, misguided people that never quite goes away.

--And that’s it for Asylum. What a time. I loved it. Was it stronger than Murder House? From a narrative perspective, probably not. Season One focused tightly on its core characters, always telling their story while allowing lots of other stuff to dance around the edges. Season Two had at least three big stories to tell at once, more main characters to keep track of, more stuff it wanted to say. So it was unwieldy. I loved its unpredictable nature, loved the character arcs, and the strong work of some players (Jessica Lange, Sarah Paulson, Lily Rabe) made up for the inconsistency of others (James Cromwell, Joseph Fiennes, Chloë Sevigny). I’d say my biggest criticism is the over-reliance on Johnny Thredson toward the end; he just wasn’t as interesting a villain as Thredson Senior, Evil Eunice, or even early Sister Jude. Yeah, it was all about the Themes. Ryan Murphy loves his Themes. But I wish that Evil Eunice had stuck around longer, even though, when you think about it, she was a less relevant bad guy. My second-biggest criticism would be that the alien subplot didn’t quite slot in, and led to Grace’s character being sadly wasted in the end. My third-biggest would be that Monsignor Howard was allowed to exist. But I’d rather focus on what I enjoyed, which was almost everything else. I cannot WAIT for Season Three (is it witches? Looks like witches!) to take us on the next grisly, goofy ride. 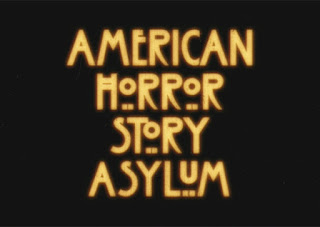